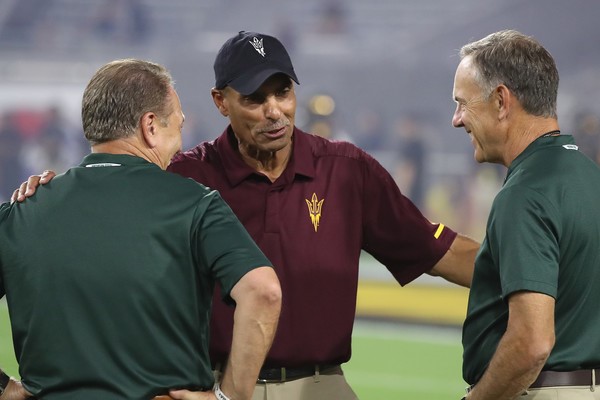 Arizona State coach Herm Edwards offered an observation about young athletes, breaking into his familiar belly laugh that fills a room. They view the 1960s as ancient history, he says.

Well, in 2019, Edwards’ coaching career adds a chapter with significant link to that momentous era in American history. He takes the Sun Devils to Michigan State, the school that led the integration of college football in the 1960s, for a game on Sept. 14 at Spartan Stadium.

When Edwards was named the New York Jets’ head coach in 2002, he was only the NFL’s fifth African-American head coach. When ASU hired him in 2018, he was one of only 13 black head coaches among 130 Football Bowl Subdivision schools. This year the total is down to 12.

The numbers are worth noting in relationship to Michigan State coach Duffy Daugherty’s Underground Railroad teams of the 1960s.

As Edwards says, today’s youth don’t realize how much times have changed, no matter how much progress remains. The odious door pushed open for black athletes — as well as for those that followed their playing days into coaching — can be traced to Daugherty’s ground-breaking teams. Martin Luther King’s movement did the heavy lifting, but Jackie Robinson’s story demonstrated sports, especially when on seen nationwide on TV, has been an important avenue to travel.

Two of the Underground Railroad’s 44 ensorcelled passengers from 1959 to 1972 were Jimmy Raye of Fayetteville, N.C., the South’s first black quarterback to win a national title in 1966, and Sherman Lewis of Louisville, Ky., third in the 1963 Heisman Trophy voting.

“Duffy was way ahead of the curve – there is no doubt about that,” Edwards said. “Jimmy has told me a lot about him. You didn’t see black quarterbacks in the 1960s. Duffy didn’t care about color. The best players played. Football teams are a collection of all types of players from different walks of life. That’s what makes a team.”

Daugherty later hired the pioneering Michigan State Hall-of-Famers on his coaching staff, returning Lewis to campus in 1969 and Raye in 1971. At the time, there were few black assistant coaches in college football.

Similarly, when Raye moved on to the NFL with the San Francisco 49ers in 1977, there were only three other black assistant coaches in a 28-team league. He also was one of the NFL’s first offensive coordinators in 1983 with the Los Angeles Rams. Lewis moved on to the NFL as an assistant with San Francisco and later as an OC with the Green Bay Packers, collecting four Super Bowl rings along the way.

Although Edwards is more commonly associated with Tony Dungy — the Pro Football Hall of Famer that was the first black head coach to win a Super Bowl in the 2006 season — Edwards and Raye in the early 1990s were Kansas City Chiefs assistants. As a head coach, Edwards named Raye to his Jets’ staff.

“Jimmy Raye had a lot of knowledge – an excellent coach and a really good friend,” Edwards said. “He helped me a lot in the coaching profession. He had the knowledge to be a head coach, but he didn’t get a head coach job. Tony and I often reflect on those guys that came before us. I always say we stood on their shoulders.”

Raye, 73, was often mentioned in the 1980s as a prime candidate to become the NFL’s first black head coach; that was before the Raiders hired Art Shell in 1989. Both Raye and Lewis say interviews they had for a vacant head coaching position were likely for “show” to satisfy the Rooney Rule of interviewing a black candidate.

Now, in one of those life-comes-full-circle moments, Edwards is about to grace Spartan Stadium’s hallowed turf. He’ll patrol the same sideline where so many legendary coaches faced the Spartans, most prominently Notre Dame’s Ara Parseghian, in the 1966 Game of the Century.

“A lot of our players didn’t realize Jimmy played quarterback in college before he got into coaching,” Edwards said of their NFL days. “I remember him telling them that.

Those players breaking ground are still walking among us — telling their stories of escaping segregation to those that will listen — although Father Time is taking his toll. From those 1965 and 1966 back-to-back national championship teams, College Football Hall-of-Famers George Webster of Anderson, S.C., and Bubba Smith of Beaumont, Tx., and All-Big Ten linebacker Charlie Thornhill of Roanoke, Va., have passed away.

Prior to Daugherty’s influence on the game, integrated schools typically limited their black players to a half-dozen or so. Minnesota’s 1960 national championship team had five and USC’s 1967 national title roster seven. USC’s next national title team in 1972 had 23 black players. The Underground Railroad had shown the way.

But in 1966, Daugherty snipped another hole into a space-time continuum, inserting Raye ahead of the times as black starting quarterback. The epic game ended in a 10-10 with the National Football Foundation declaring the Spartans and Irish national co-champions.

As for Edwards in the 1960s, segregation nearly engulfed his youth, but an unwritten U.S. Army policy spared him.

His father Herman Edwards Sr., who had served in World War II and Korea, married a German woman. When Herman Jr. was born in 1954, his father was stationed at Fort Monmouth in New Jersey. When his father returned to Germany for a Cold War tour, his sister Irvina was born in 1958.

In 1960, Herman Sr. was set to rotate stateside, but it was a time period when the Army avoided sending interracial couples to a base within the ominous shadow of Jim Crow. Instead, he was sent with his family to serve at Fort Ord in Monterey, Calif.

“They couldn’t let him go South … and he was in the Army!” said Edwards with a sardonic laugh. “It’s funny what people in today’s world of the 2000s don’t realize about the 1960s.”

Although life on the Monterey Peninsula was hardly a consolation prize – Edwards still has a home in the scenic area – America’s on-going racial struggle to level the playing field for people of color caught up with Edwards in 1968 as he entered high school. He had attended an integrated middle school in Seaside, a Monterey Peninsula town, before the Monterey Peninsula Unified School District instituted a busing program. Edwards was sent to predominantly white Monterey High instead of neighborhood Seaside High.

“It didn’t bother me,” he said. “I had been to integrated schools. The only thing about it was the zone (for Monterey High) was drawn around our house. I’ve always kidded my coach (Dan Albert), my first football coach, about it.

“I say, ‘Let me get this right. That zone went around my house but everybody else on my street went to Seaside. Did you draw line for the good players?’ He’d say, ‘No! No! No!’ ”

Another belly laugh crackles across the cell phone sound waves.

Busing or not as an influence on his life, Edwards is a problem solver that adapts. He has a contagious smile. One of his noted quotes from a list found on the Internet: “Your problems are never bigger than your purpose.”

He has proven that as Arizona State’s surprise choice for its head coach in 2018 — a hire met with criticism. Edwards hadn’t coached since 2008, his final NFL season as head coach of the Chiefs. Since 2009, he had worked in TV studios as an ESPN analyst for NFL games. He hadn’t coached college kids since 1989 as a San Jose State assistant.

But those doubts were abated just two games into last season when No. 15-ranked Michigan State visited the desert. Edwards masterfully milked the clock in the fourth quarter as his unranked Sun Devils pulled off a 16-13 upset victory.

The Sun Devils’ 2-0 start was encouraging, but the result meant more to Edwards’ vision of ASU’s football than one W.

“When they came to our place, I told our players this is a program we want to emulate,” Edwards recalled. “It starts with their head coach (Mark Dantonio). I respect him tremendously. Same with their basketball coach – (Tom) Izzo is a good man.

“They’re a tough school with athletes that are big and physical. They know who they are. You have to play four quarters to have a chance to beat them. And things have to go your way. Things went our way when we played them at home.”

Now it’s time for the second leg of the home-and-home series scheduled long ago. Are the football gods smiling on this 2019 match-up? The spirit of progressive Duffy Daugherty may be felt over Spartan Stadium on a day a renowned African-American coach patrols the visitors’ sideline?

Michigan State coach Mark Dantonio enters the 2019 with 107 career victories. Daugherty retired with a school record of 109. Eight MSU coaching changes later, Dantonio has a chance to break Daugherty’s record as early as the ASU game – if the Spartans start 2-0 against Tulsa and Western Michigan.

“Good for Mark,” Edwards said without a flinch in his voice. “That makes this game every bit better. That makes it big. He deserves all the accolades he receives. He’s one of the great coaches to coach the game. I have a lot of respect for him.”

Not to mention Duffy Daugherty’s Underground Railroad teams and the opportunity it fostered for its players and coaches.