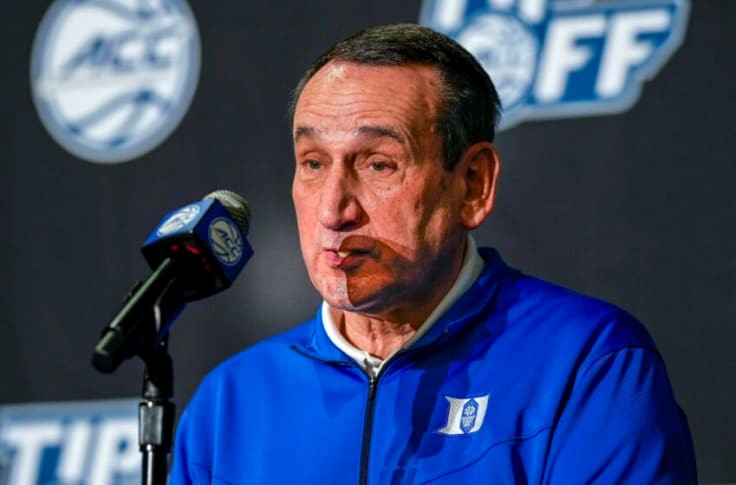 We’ll learn more about Duke’s national title chances once the season tips off against Kentucky on Nov. 9 in the State Farm Classic in New York, but coach Mike Krzyzewski already is in mid-season form.

He arrived at the ACC basketball media day on Tuesday in Charlotte swatting way all questions about his last season upon retirement. He sent back shots as forcefully as the Blue Devils expect Mark Williams, their sophomore 7-footer, to do this year as one of the nation’s leading shot blockers.

Krzyzewski, the West Point man and retired U.S. Army captain, is not fading away in his 42nd Duke season and 47th overall counting his years coaching at his alma mater. Only old soldiers fade way, according to another renowned West Point man, General Douglas MacArthur.

Coach K sat on a dais blowing up questions with artillery and letting the infantry clear the landscape.

First, Krzyzewski was asked for his thoughts entering the season.

“Yeah, well, that’s not going through my mind,” he said. “My mind is on this season, and when it’s over, I’ll know that it’s my last. These guys deserve for me to be in their season, so that’s where I’m at. I think they would tell you that that’s where I’m at.”

A reporter described associate head coach Jon Scheyer — who takes over next year as head coach — as Duke’s coach-in-waiting on the bench.

“Well, he’s not a coach in waiting, he’s my associate head coach. He’s been with me for eight years, and he’s basically going to do the same fantastic job that he’s always done and then take over and continue to do that job.”

Next, Coach K put on a full-court press, not even waiting for the question to be fully expressed. He picked it off like an inbounds pass he converted into a score.

He was told a national championship would be his sixth. Does he have another goal for the season?

“No. I just do what I do for every year, once I learned how to coach. It’s to be in the moment, to get to know my guys. I feel great about my relationship with each individual player on our team. Because it wasn’t like last year, I actually spent a lot of time with them. Not being on the road recruiting has been a Godsend for me as far as developing those relationship.”

Another reporter tried approaching from Coach K’s flanks. He asked questions of the two Blue Devils attending the ACC media alongside him. They gave respectful answers, but Krzyzewski ran a fastbreak.

“I’d like to just add something to that. They can’t play for me. They’ve got to play for us. We’re not going to be good unless we own it. Like you can’t do it for somebody. You’ve got to do it for you, for your group. That’s the mentality that we’ve had, and we’ll continue to have.”

Then a reporter tried a back-door question, hoping to get Coach K to commit himself. He was asked how he wanted to be covered in his final season. Coach K was ready for that play.

“Just be the effervescent people that you’ve been for over four decades where it’s been so exciting to be with you and hearing your questions and reading what you actually think I said.”

That answer drew laughs. Who does Coach K think he is? The ghost of Jim Valvano?

Then he added his straight answer.

“No, just go for it and let’s see what the hell happens.”

The old coach has put the ball in play for his final season.