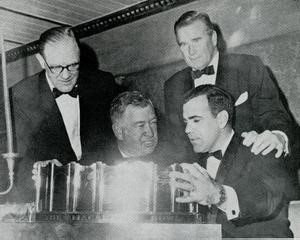 You might be thinking, of course. Who else gets the trophy?

Well, most college football fans take for granted the MacArthur Bowl naming its national champion. But anyone from Michigan State should appreciate its proud history.

In the era while polls deciding national titles by votes, the NFF sometimes departed from the other three organizations – Associated Press (writers), United Press International (coaches) and Football Writers Association – sanctioned ed by the NCAA to award a national title.

The NFF’s independence was never more significant than 1966, the year of the Game of the Century matching No. 1 Notre Dame and No. 2 Michigan State. They finished with identical 9-0-1 record and played to a 10-10 tie on the field in a quasi-national championship game on November 19, 1966. Neither team played in a bowl game since Notre Dame didn’t accept bids until 1969 and Michigan State, the 1965 Big Ten champion in the Rose Bowl, was kept home by the Big Ten’s no-repeat rule.

Vincent DePaul Draddy, the NFF’s chairman of the MacArthur Bowl, explained the NFFl’s co-title decision with a quote in the New York Times: “The reasons are very obvious why we divided the award. It seemed like the only fair thing to do with two excellent teams like Notre Dame and Michigan State.”

The MacArthur Bowl was started in 1959. It was the brainstorm of a college football troika: famed sportswriter Grantland Rice, Gen. Douglas MacArthur and and Army West Point College Football Hall of Fame coach Red Blaik.

Rice was the heart of college football as a New York sportswriter with a national column in hundreds of newspapers. He wrote the hallowed lines that immortally nicknamed Notre Dame’s backfield, “The Four Horsemen.” He dubbed Hawaii’s Tommy Kalakukukui “The Grass Shack” after he returned a kickoff 103 yards for a touchdown against UCLA in 1935 at the Los Angeles Coliseum. That attention from Rice was enough for Kaulukukui to earn honorable mention All-American honors. It was the first such distinction for a Hawaii football player 24 years before the U.S. Territory was granted statehood as our 50th state.

The 5-star general, a West Point graduate and West Point superintendent between World Wars I and II, loved college football. When Army won the 1944 Army-Navy Game, 23-7, MacArthur sent a telegram to Blaik from the World War II Pacific theater: “The greatest of all Army teams. We have stopped the war to celebrate your magnificent success.”

Blaik coached Army’s 1944 and 1945 national title teams with Mr. Inside and Mr. Outside winning back-to-back Heisman Trophy winners, Doc Blanchard (1945) and Glenn Davis (1946). When MacArthur returned from Korean War and lived at the Waldorf-Astoria Hotel, Blaik had a young assistant coach, Vince Lombardi, drive the game film into New York to have it developed. But before he returned home, he was to stop at the Waldorf-Astoria and review the film with MacArther.

Although Rice died before the inaugural 1959 award and MacArthur in 1964, the spirt of Rice and MacArthur lived on through the 1966 split title. Blaik died in 1989 at age 92.

I explained to Terry he forgot about the NFF co-championship, although he understandably focuses on the AP, UPI and FWAA outright titles.

Nevertheless, Hanratty says of the two rosters, “I still say to this day those are two best teams to ever play each other. You look at the amount of talent that was on both sides of the field.”

There were seven first-round draft pick, with four from Michigan State among the first eight — No. 1 Bubba Smith, No. 2 Clinton Jones, No. 5 George Webster and No. 8 Gene Washington — and three from Notre Dame, No.12, Paul Seiler; No. 15, Alan Page; and No. 23, Tom Regner.

Among the three classes on the field (freshmen were eligible until 1972), the talent including the juniors taken in the 1968 draft and the sophomores selected in the 1969 draft totaled 10 first-round picks, 42 overall draft picks, 33 pro players and 25 All-Americans.

There were only two other years the NFF stood alone, naming its national champion: Ohio State, in 1970, and Notre Dame, in 1964.

— In 1970, Ohio State (9-1) as NFF’s co-champion with Texas. Ohio State was 9-1 with its only loss in the Rose Bowl to No. 12 Stanford. Texas (10-1) was unbeaten with its only loss in the Cotton Bowl to No. 6 Notre Dame. Texas claimed the FWAA title outright and Nebraska (11-0-1) the outright UPI and FWAA crowns. Nebraska was tied by USC in the second week of the season, but the Cornhuskers won the Orange Bowl against LSU.

One year the NFF got it wrong, though, was 1978. USC (11-1) beat Alabama (11-1) head-to-head when the teams played the second week of the season at Legion Field in Birmingham. USC’s loss was when the Trojans were victims of a Arizona State and a crowd rabid over the school’s first year in the Pac-10 on a Saturday night at Sun Devil Stadium. The AP, FWAA and NFF voted Alabama the champion, while UPI got the head-to-head right with USC its national champ.

Throughout the poll era history, there is a pattern of folk-hero favoritism accorded Alabama coach Bear Bryant, especially among the southern voters.