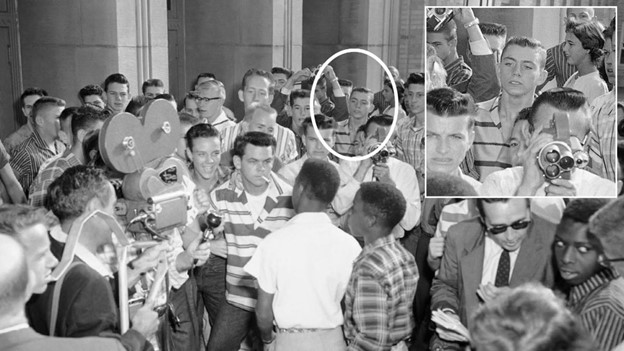 PHOTO: The photo of Jerry Jones taken in 1957as he stood among a mob of White supremacists at North Little Rock High. The photo accompanied a story published in the Washington Post by David Maraniss and Sally Jenkins.

So, when James and Green agree, give weight to Green’s words, too (more, actually).

James brought up a story with a photo of Dallas Cowboys owner Jerry Jones as a 14-year-old student standing amid a White mob at North Little Rock High — a campus across the river from Central High. They blocked six Black students from enrolling.

“I was wondering why I haven’t gotten a question from you guys about the Jerry Jones photo. But when the Kyrie [Irving] thing was going on, you guys were quick to ask us questions about that.”

James and Green believe Jones received a pass from the national media.

“The photo is past history,” Green said, “but Jerry is now a man in the middle of professional sports. The Cowboys are a team known throughout the country. He can bring about significant change in the landscape of race relations – not just in football but in the entire landscape.”

Jones has owned the Cowboys 34 years without hiring a Black head coach, which is a fair point to make. But overlooked while citing his track record was a 1998 “sham interview” with Sherman Lewis.

He was then the Green Bay Packers’ offensive coordinator, and the Packers were coming off back-to-back Super Bowl trips – winning the 1996 season’s title game, losing the 1997 season’s championship. Such a resume shoots to the top a list for vacant jobs, and the Cowboys led Lewis to believe he was a leading candidate. They wanted, understandably, a quiet interview process.

However, when Lewis flew into Dallas, he was surprised. He told the story in my 2014 book, “Raye of Light, Jimmy Raye, Duffy Daugherty, the Integration of College Football and the 1965-66 Michigan State Spartans.” The quotes are in Chapter 22, “The Cursory Head Coach Interview.”

“I was coming in for an interview that I thought was undercover and all of the sudden these television camera lights flashed on me,” Lewis said. “There were TV cameras everywhere. Everyone knew I was coming. I think that interview was just for show.”

Jones cynically checked the Rooney Rule box requiring franchises to interview Black candidates. How many other sham interviews has he conducted?

In 1998, Jerry Jones was turning 56 years old. Was he a wiser Jerry Jones who understood American history and that leadership was needed to look beyond a wealthy White male’s network of candidates. Or were Jim Crow South prejudices as entrenched him now as when he grew up in the segregated South.

The Cowboys hired Chan Gailey, a White offensive coordinator for the Pittsburgh Steelers. Gailey was fired two years later. Since 1998, Gailey is one of six coaches Jones has hired – all of them White. They had varying experience. Jason Garrett’s resumed paled compared to Lewis’ when Garrett was hired in 2008.

Interestingly, in a small-world story, Green and Lewis share backgrounds as Michigan State students in the early 1960s. They arrived from the segregated South through the attitudes of Michigan State president John Hannah and Spartans College Football Hall of Fame coach Duffy Daugherty.

In 1957, President Dwight Eisenhower appointed Hannah the first Chairman of Civil Rights Commission. Green received an anonymously funded scholarship he learned after Hannah’s death in 1991 was from Hannah.

Daugherty changed college football’s face with its first fully integrated rosters in the 1960s. Lewis, who was from Louisville, Kentucky, was third in the 1963 Heisman Trophy voting just two years after Syracuse’s Ernie Davis was the first Black Heisman winner. Daugherty also made Lewis a pioneer as a Black assistant coach, hiring him in 1969.

One year before Lewis arrived at Michigan State, Daugherty’s first Underground Passenger, Clifton Roaf, boarded a segregated train in Pine Bluff, Arkansas, bound for East Lansing, in 1959. He wanted to leave the South after the events of the Little Rock Nine.

Roaf, along with his high school principal and coach, knew Michigan State’s reputation for integrated rosters. They reached out to Daugherty on behalf of their star player and class valedictorian at Pine Bluff’s Black high school.

Roaf re-injured his knee in spring football of his freshman year, 1960, and ultimately never played a varsity down. But he graduated, and with a change of heart, later returned to Pine Bluff for a career as a “country dentist.” His Michigan State bride, Andre Layton Roaf, was the first Black woman named to the Arkansas State Supreme Court. His son Willie Roaf has been enshrined in both the College and Pro Football Hall of Fame. His daughters, Phoebe and Mary, both hold Ph.d degrees.

Roaf said he was “indebted to the people of Michigan State” for his scholarship and degree.

Green’s future crossed paths with Jerry Jones in the desegregation years through Daisy Bates of the NAACP’s Little Rock chapter. She led the push, selecting the nine volunteers for their academic records. Bates attempted to enroll them on September 3, 1957, but Arkansas Gov. Orville Faubus ordered the Arkansas National Guard to block their entrance.

Meanwhile, three days later six Black students tried on their own to enroll at North Little Rock High. A White mob, with Jones amid them, turned them back.

Army soldiers escorted them class to class and remained at classroom doors to prevent harassment. But the administration soon limited the Army’s presence to standing in the halls.

“They said they wanted to normalize activities,” Green said. “The soldiers didn’t walk with us anymore. Of course, the hostility and contact increased.”

When Jones was asked after a Cowboys game about the photo, he didn’t explain his segregation attitudes.

As Jones’ wealth and power grew and he purchased the Cowboys, did he feel a responsibility to cultivate equal-opportunity leadership?

We don’t know. He received a pass and has come out the other side of the news cycle virtually unscathed.