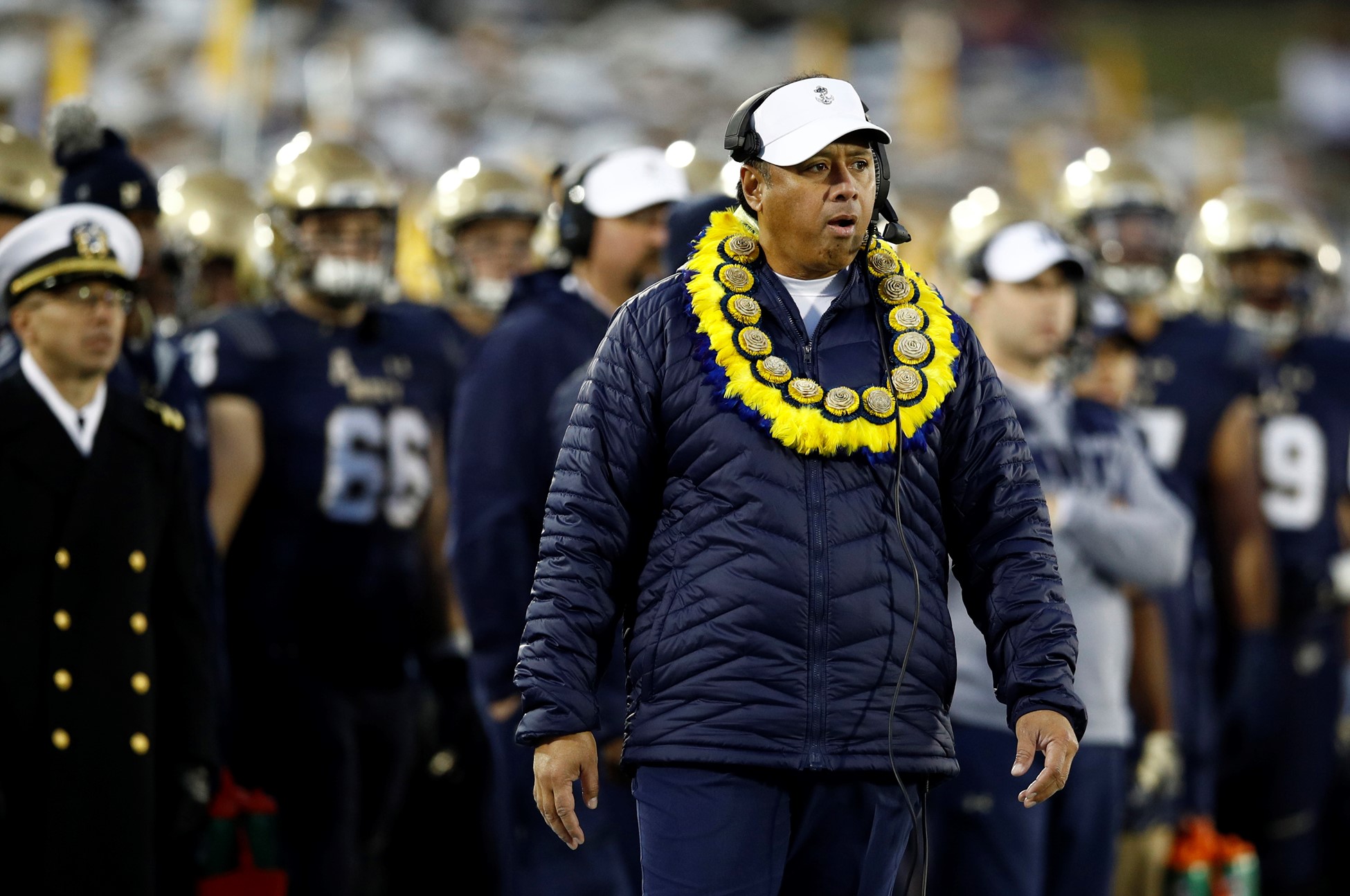 PHOTO: Ken Niumatalolo is on his way to the College Football Hall of Fame after 15 years at Navy.

The college football world quickly came down on the side of Navy coach Ken Niumatalolo upon news Sunday he was unceremoniously dismissed. Twitter reacted within moments and stories were posted and printed in the old-fashioned world within a day.

How do you let go a guy who is on the way to the College Football Hall of Fame?

In 15 Navy seasons, Niumatalolo was 109-83 while winning the Commander-in-Chief’s Trophy six times (that’s more than Air Force or Army in the span) along with 10 bowl trips. And, oh yeah, he turned down jobs to remain coaching in Annapolis.

Ken, while you decide when and where to continue coaching, consider a request from me, along with Bob Apisa, a boyhood legend of yours while you played at Honolulu Radford and the University of Hawaii.

As you know, it featured Apisa recruited out of Honolulu Farrington as the first Samoan All-American player, 1965 and 1966. His career as a fullback launched the tsunami wave of Polynesian talent that permeates American football at all levels, coast to coast.

At age 57, you can use this time as an opportunity to pay homage to Daugherty and Apisa. Do it from East Lansing on staff — I’d love to see you on the Spartan Stadium sideline with a lei draped around your neck — or from the home you’ve maintained in paradise.

For the readers, I write this a bit tongue-in-cheek, of course.

Niumatalolo is over-qualified for any job beneath head coach, but I learned of his respect for Daugherty and Apisa when he graciously granted me time for an interview in 2012. I was researching and writing “Raye of Light,” a 2014 book on Michigan State’s 1960s team changing the faces of the game.

“I see Bob Apisa as not only a trailblazer for Samoan and Polynesian players but for coaches as well,” Niumatalolo says in Chapter 13 of “Raye of Light,” Page 159. “You have to be a player before you’re a coach. There a lot of Samoans and Polynesians coaching now. Bob was a pioneer who opened the door for us.”

Daugherty’s 1960s teams have never been properly credited by the national media for the roles they played, so I never miss a chance – such as this one with Niumatalolo as the vehicle — to re-tell an otherwise untold story.

Hawaii’s 21st-century population is double what it was in the sleepy island days when Apisa played in the early 1960s. Hawaii’s college team wasn’t a Division I program until 1974, so Hawaiians considered Michigan State an adopted team through Daugherty’s years recruiting 10 Hawaiian Pipeline players, 1954-72.

Daugherty was ahead of his time recruiting Hawaii, thanks to his friendship with Tommy Kaulukukui. When Michigan State played at Hawaii in 1947, Daugherty was an assistant coach (he was promoted in 1954) and Kaulukukui was Hawaii’s first football legend as a player in the 1930s and head coach (1941, 1946-50).

Daugherty told Kaulukukui anytime he saw Big Ten talent, he had a scholarship for him. The first was William Kaae (Honolulu Farrington), who is believed to be the first Hawaiian to play in the Rose Bowl (1956) in the 1955 season.

In 1966, Michigan State kept alive its unbeaten season in a march to the Game of the Century against Notre Dame with an 11-8 comeback win at Ohio State. All of the Spartans’ points were scored by Hawaiians: Apisa, touchdown (6); Kenney, field goal (3); and Wedemeyer 2-point conversion pass from Kenney.

The headline in the Honolulu Star-Bulletin illustrated Hawaii’s affection for the Spartans: Hawaiians 11, Ohio State 8.

Michigan State’s Game of the Century was the first live broadcast of a football game in Hawaii. One reason was emerging space technology. Another was a demand from fans to a titanic showdown featuring Hawaiian Pipeline players.

But then it all stopped. Denny Stolz (1973-75) deliberately severed the pipeline, which is why Morgado transferred home to play at Hawaii on his way to the NFL with the Kansas City Chiefs.

Darryl Rogers (1976-79) was from California and unaware of Michigan State’s history. He failed to see the value of re-tapping contacts in Hawaii. Muddy Waters (1980-83) recruited Carter Kamana out of Honolulu Kamehameha, but the next five coaches failed to recognize the unique Hawaii-Michigan State bond. One of the coaches was Nick Saban (1995-99), who now actively recruits Hawaii as Alabama’s coach.

Tucker, as I understand it, wants to re-tap Hawaii. But it’s a far tougher task now that Hawaii is a hotbed. Ane, who coached Te’o at Punahou, says if Michigan State wants to return to Hawaii, “They’d be welcomed back.” Daugherty’s Tommy K on the Islands can be Tucker’s Kenny N.