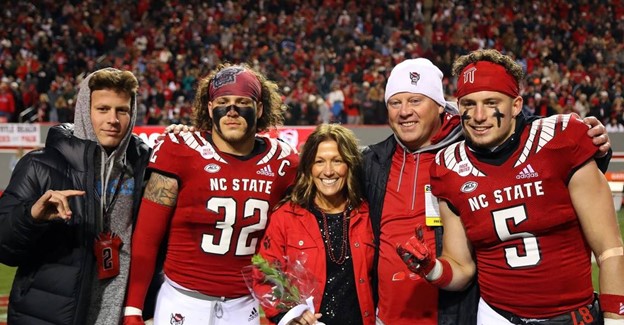 They’re West Virginia transplants who’ve evolved into a Triangle first family of football. Trevor and Shelly Thomas and their three sons, Thayer, Drake and Lex, are in the middle of two heavyweight showdowns this weekend.

First is a Thursday night game — moved up a day due to Hurricane Ian rain forecasts — when Millbrook (5-0), the Triangle’s Sweet 16’s No. 3-ranked team, hosts No. 7 Heritage (5-0). Lex Thomas leads Heritage as a senior quarterback committed to N.C. State. Trevor, who was an offensive lineman at Marshall University, is a volunteer assistant coach for the Huskies. Shelly says she’ll arrive at the stadium around 6:30 p.m. to sit among the fans.

On Saturday, No. 10-ranked N.C. State (4-0) faces No. 5 Clemson (4-0) in an ACC showdown worthy of ESPN’s “College GameDay” crew setting up on the Clemson campus. The older Thomas brothers are Wolfpack starters — Thayer, a graduate student receiver, and Drake, a junior middle linebacker.

Click here for the rest of my News & Observer story.

Click here to order Raye of Light from August Publications

Cutcliffe takes blame, adds to his schedule to face Virginia