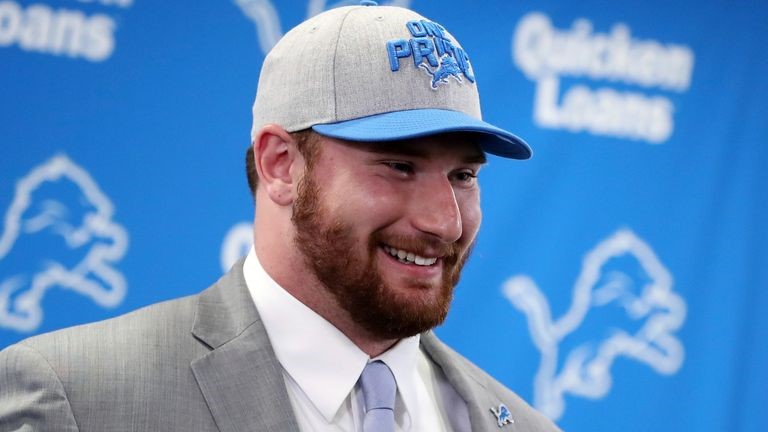 My Detroit Free Press story from May 21, 2018 with comments from WIllie Roaf on Frank Ragnow, winner of the Willie Roaf Award. Three years later, Ragnow is the highest paid center in the NFL with his new contract, four years for $54 million.

By now, the slicing and dicing of Frank Ragnow’s NFL measurables is complete.

The Detroit Lions examined the height, weight and quickness of the 6-foot-5, 312-pound center from Arkansas. They used their first-round draft pick on him.

Some pundits and Lions fans, however, were skeptical. Some felt the 20th overall pick was too high for a center. Others cited more pressing position needs.

“He’ll get stronger and it will translate well with his quickness,” Roaf said. “When you have his quickness, feet and balance, you can play multiple positions. He’s not only able to play guard or center, he’s tall enough he could play tackle if they needed him.”https://19975f118a16ca0c7a6c0501292c8a0c.safeframe.googlesyndication.com/safeframe/1-0-38/html/container.html

For Ragnow’s rookie year, the Lions feature flexibility to play him at center or guard as returning veteran Graham Glasglow has played both positions.

“That will help Frank a lot,” said Roaf, who has started the company FrameYourGame.com in his retirement years. “He’ll be able to move around, but they want to get him where he’s striving at one position. Then they want to lock him into that position. I think he can be a Pro Bowler within the next couple of years.”

When Roaf, the eighth-pick of the 1993 NFL draft out of Louisiana Tech, was told some believe Ragnow was taken too high for an offensive lineman, he quickly answered.

“I think it’s always a good thing if you can get a lineman and plug him in for the next five to 10 years,” he said. “That’s always a great thing for your franchise. I was drafted high; look at my career.”https://19975f118a16ca0c7a6c0501292c8a0c.safeframe.googlesyndication.com/safeframe/1-0-38/html/container.html

Ragnow was a three-year starter that entered his senior an All-American and Rimington Award candidate until an ankle injury ended his season after the seventh game. Nevertheless, he was a second-team All-American choice by the Football Writers Association of America and third-teamer by the Associated Press. According to Arkansas statistics, he didn’t allow a sack in his career, covering 33 consecutive starts and 42 games for his career.Get the Lions headlines newsletter in your inbox.

Measurables aside, all that remains is for Ragnow to prove himself on the field. Roaf can relate to reasons he is high on Ragnow’s character and dedication to the game. Ragnow has spoken about dedicating his NFL career to his father Jon,, who died suddenly of a heart attack in the middle of Ragnow’s junior season.

Roaf’s father, Clifton Roaf, was the first passenger on Duffy Daugherty’s Underground Railroad teams at Michigan State. Daugherty recruited 44 players from the segregated South in his 19-year career, starting with Clifton Roaf out of Pine Bluff, Ark., in 1959.

Clifton Roaf never earned a letter, having suffered a career-ending knee injury in spring football, but he treasured his time on the East Lansing campus. He met his wife, Andree Layton Roaf, and both graduated from Michigan State.

He later returned to Pine Bluff, retiring from a career as a dentist before his death in Sept. 2017. Roaf’s late mother was a lawyer and the first African-American woman to serve on the Arkansas Supreme Court.

“I know Frank has got a lot to prove, and I know his dad is watching over him,” Roaf said. “My dad was a hard-working man who never got to play at Michigan State because of his knee injury. My dad and I both believed God sent me here to finish what my dad couldn’t finish. You have a lot to play for when your parents are proud of you.”

Jaybron Harvey wants to build something at UNC