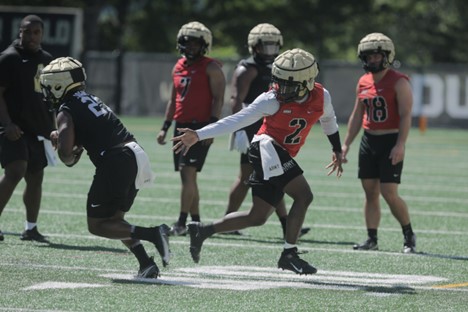 The grind as an Army freshman seemed at times as if there was no light at the end of the tunnel. Then, seemingly in a blink of an eye, the same person wakes up preparing for his senior football season – a “Firstie” in West Point vernacular.

I asked Army senior quarterbacks Tyhier Tyler and Cade Ballard, who are battling the for the starting job in 2022, for their thoughts their final football season prior to West Point graduation and being commissioned as an officer.

“To everyone else, it seems like it went by fast,” said Tyler, a 5-foot-8, 183-pounder from Newport News, Virginia. “My mom and dad say it flew by. It didn’t feel like it to me in this bubble. It feels long. But now, looking back, it did fly by.”

What was the range of emotions?

The cadets went from committing in high school to take on the challenge, to surviving Beast Barricks (boot camp), grinding through their plebe (freshman) and yearling (sophomore) years and to their first day as a cow (junior) for affirmation. They sign on to a binding commitment for the next two years of school and five of military service.

“Since I committed, I knew this is what I wanted to do,” Tyler said. “I could have easily left. But the opportunity to stand in front of soldiers and lead, that’s big. It’s a great opportunity to be in the Army. I have a special place in my heart (for West Point).”

Ballard, a 5-10, 200-pounder from Greeneville, Tennessee, said: “It’s a wild ride. You get here and everyone comes from a successful high school career no matter where they came from. Everybody has been the big dog on campus. As soon as you get here you, you get knocked down and then they build you back up. That’s the model that has worked so well for so many years.

“You get here the first year and you have to really grind to figure out how everything works — what is the standard? It’s a big difference when you get here from high school. You’re on your own when get up here. You have to grow up at 18, which was great for me.

Tyler has the experience advantage on Ballard as the Black Knights prepare for their season opener.  Jemel Jones is another senior quarterback, but Tyler and Ballard have the edge on him for the first week of training camp following spring football drills.

Army’s first game is on the road September 3 at Coastal Carolina. The Black Knights are coming off a 9-4 season with an Armed Forces Bowl victory over Missouri.

Coastal Carolina, a Sun Belt Conference school in Conway, S.C., near Myrtle Beach, was 11-2 with a win over Northern Illinois in the Cure Bowl. The Chanticleers were ranked as high as No. 14 last season before losses to Appalachian State and Georgia State and finishing out of the Top 25.

Last season, Tyler played in 10 games while mostly running the ball in relief of Christian Anderson, who has graduated. Tyler was third on the team in rushing with 125 carries for 486 yards and seven touchdowns. He was only 3-of-7 passing for 79 yards, but the one completion was a 14-yarder for a fourth-quarter touchdown and 21-16 lead in the Armed Forces Bowl victory.

Ballard played in three games while rushing seven times for 40 yards. He didn’t complete a pass on two attempts with one interception, but he is considered the better passer. He played in a spread offense in high school and has been adapting to the triple option.

As seniors, they’ve established themselves on the roster, but they also faced moments of doubts. West Pointers say anyone who ways they didn’t think about leaving is lying.

For Tyler, he says it was the 2019 season, his freshman season after a year at the Army Prep School. He struggled academically and was relegated to the scout team while the Black Knights struggled through injuries and a 5-8 record

“Being on the sideline and on the scout team and knowing you could have contributed that year while watching us lose games and knowing I could have helped was hard,” Tyler said. “I felt maybe this is not for me. I didn’t know if I could get the academics down. But I had the right mentors, the right people and the right resources to turn things around.”

Ballard, a direct admit in 2019, also said his plebe year was the hardest on him. He needed back surgery just as the academic calendar began.

“That was a tough time,” he said. “I couldn’t carry a backpack for six months. I was hobbling around campus with books in my arms. But everybody who sticks around learns it’s so worth it and so valuable. The friends you make. Those though times don’t last but tough people do. It’s a blessing still be here.”

Army defensive coordinator Nate Woody, now in his third season, says his respect for the academy football players has grown from his view from the outside while coaching at civilian schools.

“Since I’ve been here the percentage of guys that want to go somewhere (after two years) is so low,” Woody said. “It surprised me. I knew this was a special place when I came. Guys get to their junior year, and they don’t want to go anywhere else. They want to affirm. They’re gung-ho about what they do.

“You’ve got to have an awful lot of respect for these young men. And they carry it on to the football field as well. The discipline and the effort you get is just tremendous. It’s great to to be able to coach at West Point because of the type of effort and discipline and focus and everything about the well-rounded student athlete. It’s just awesome.”

And as the Cadets eventually learn, in the end it goes by fast.

Dedication page: “To all the true 1960s pioneers of college football integration, Black white, North and South, whose courage and legacies have been unjustly overshadowed by myths and fiction crafted around the 1970 USC-Alabama game. The true 1960s pioneers include Michigan State coach Duffy Daugherty’s teams and players opening doors, Duffy’s assistant coaches following his blueprint at their new schools, Duffy’s Chief Engineer for the Underground Railroad, Willie Ray Smith Sr., and the pioneers who were the first Black players on their otherwise segregated campus. The 1960s barriers they broke down cleared the way for the 1970 USC-Alabama game to be played without incident.”