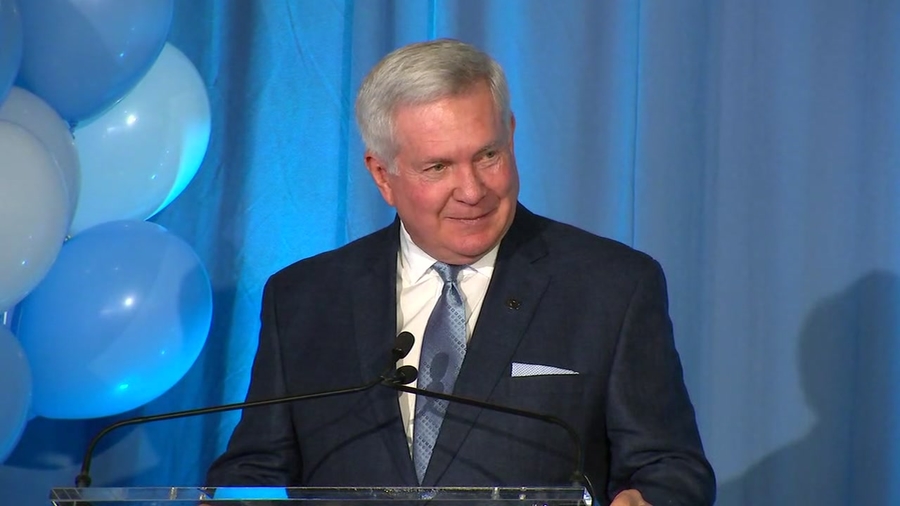 CARY, N.C. – A preseason football luncheon is the perfect setting to discuss the virtues of college football. The National Football Foundation Bill Dooley Chapter’s annual Pigskin Preview is a time for renewal and optimism.

To that end, North Carolina coach Mack Brown, 70, shared wisdom from his 33 years as a head coach at four schools, including a national title in 2006 at Texas. He’s beginning the fourth season of his second stint at North Carolina after a five-year break from his 16 at Texas.

Brown spoke about the satisfaction of returning to coaching after relinquishing the reins of the Longhorns following the 2013 season. He broke his comments into three categories while also acknowledging much of the wisdom he gains comes from his wife, Sally.

“Coaches are driven and a lot of times we’re not as happy as we should be because we’re always fighting something,” Brown said. “You’re coaching 121 guys, all their mothers love them, and you only play 11 at a time. So, we’re always fighting. Sally always says ‘You’ve got to be happy. You’re supposed to be a mentor for young people and if you’re not happy and happiness is success, then how can they look at you and want to be like you if you’re not a happy person.

“The second thing is our jobs are about the kids. It’s really about them. It’s nice being up here (on the dais). All of us compete and all of us want to win. But really and truly the ability to influence each and every one of our players for the many years we coach is a gift that is not given to many people. Not many people can say something to a younger person and have them listen and might change their life. We have that ability. You have to be careful what you say to them.

But, of course, this 2022. Once the games begin, the pressure to win in a sport churning out millions of dollars makes it tougher to keep the college football to its simple ideals. Money overshadows competition on the field and recruiting in the offseason.

Much of the remaining portions of the luncheon that included N.C. State’s Dave Doeren, Duke’s Mike Elko, East Carolina’s Mike Houston and N.C. Central’s Trei Oliver addressed the rapidly changing landscape. Players are mobile through the transfer portal and able to cash in on their name, image and likeness.

“I’m all for any way we can to support student athletes,” Houston said. “There needs to be a better way to support them beyond a scholarship. I think there are positive with NIL.  The thing that scares is there are no rules. It scares me for the integrity of our game. It scares me for our kids too. When you start worrying about money from people who aren’t in your program, it worries you the impact it will have on student athletes.”

“I was in the Pac-12 at USC (as an assistant) and that’s a while to travel for student athlete,” he said. “I can’t imagie being on a team that plays multiple games a week and having travel to Rutgers and Wisconsin or a place like that from Los Angeles. You’re playing a noon kick eastern time and for California kid you’re getting up at 4 a.m. to play that game. It’s going to be interesting. That’s who is going to suffer, in my opinion. Yeah, you’ll have more money and builder nicer facilities, but game day is what matters to the athletes.”

Oliver also addressed concern for the trend to super conference extending to Historically Black Colleges and Universities. The subject has been brought up to merge the Mid-Eastern Atlantic Conference and the Southwest Conference. The HBCUs are Football Championship Subdivision schools, and their budgets require more bus travel to schools in nearby states than flying across time zones.

“I think it’s crazy,” he said. “I don’t see our fan base traveling to Pine Bluff, Arkansas, or to Houston, Texas, to play Texas Southern or to Louisiana to play Grambling. I love to play regional schools in the area.”

Elko says another problem with the changing landscape from NIL and the transfer portal is athletes may no longer make decisions for the right reasons.

“The biggest drawback I’ve seen is college kids are making college decisions not based on the school that fits them, what system fits them what coaches fits them,” he said. “Now, it’s who has the best deal coming out of high school. That has ramifications on graduating, development and success. They’re making a huge decision at 17 years old and now were putting huge piece on top of that I’m not sure everybody is ready to handle it.”

Welcome to the wild, wild West – otherwise known as college football in 2022.

My appearance on the Adam Gold Show