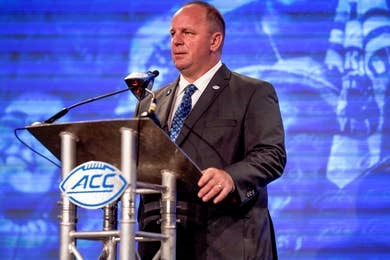 PHOTO: Mike Elko is new to Duke football, but he his familiar with in-state rivalries.

CARY, N.C. – Name, Image and Likeness combined with the transfer portal to further unsettle coach football, but if you’re looking for a glimpse of tradition, Mike Elko provided one.

Elko, like other coaches, has various concerns, but he pointed out the Atlantic Coast Conference has harkened back to the good old days with future schedules. The ACC is in its last year of divisions before adopting a 3-5-5 format that allows for more traditional rivalry games. Teams play three rivals each year and the other five opponents rotate.

Beginning in 2023, Duke’s Blue Devils in Durham will play their three in-state rivals each year – UNC of Chapel Hill, N.C. State of Raleigh and Wake Forest of Winston-Salem. Elko is new to Durham but not the ACC. He was a defensive coordinator at Wake Forest prior to his DC stints at Notre Dame and Texas A&M.

“The ACC has been a strong conference for a very long time,” Elko aid. “It’s a very regional based conference. There are rivalries that have stood the test of time. There are a lot of things fans like to see. I think we made a big step a month ago to bring more rivalries into the state of North Carolina. All of that is great for the sports. We’ve got to protect the sport a little bit.”

The 3-5-5 doesn’t cover the state for N.C. State and North Carolina the way it does for Duke, but the N.C. State, an Atlantic Division school, will resume playing Coastal members North Carolina and Duke each year.

Elko was joined at the Pigskin Preview by the usual cast of NFF Bill Dooley chapter schools: UNC’s Mack Brown, N.C. State’s Dave Doeren, East Carolina’s Mike Houston and N.C. Central’s Trei Oliver. But they spent most of the time speaking about concern over the game’s future. NIL has rapidly changed the recruiting game and destabilized rosters. Players are now picking schools based on NIL money.

For every Boston College wide receiver Zay Flowers who turned down a $500,000 NIL to transfer, there are several players like Jordan Addison. The Pitt receiver, winner of the Belitnikoff Award as the nation’s top receiver, transferred to USC.

“When our ruling body made the decision on the transfer portal, they didn’t think it through,” Brown said. “We’ve got consequences and now we’ve got to go back and clean it up. When our ruling body made decisions on name, image and likeness, they didn’t think it through. Now we’re having to go back back and clean up all the consequences.

“They started talking about a 12-team playoff, and our league was one league voted to slow it down. What does that (a 16-team playoff) mean? Does that mean you don’t play an FCS school? Does that mean you don’t’ have (conference) championship game? What about (academic) finals? What about the playoffs when you get into the NFL playoffs? How is the money distributed? We’ve got to start answering questions before we make decisions.”

Although the headlines are about major conference schools, Oliver said the problems have trickled down to his Eagles, a Mid-East Athletic Conference member as an Historically Black College and University.

“One thing we run into is tampering,” Oliver said. “If (major) schools reach out to our top guys and offer him $10,000, he’s gone. There’s nothing we can do about it. It so messy now. I’m fighting like heck to keep my guys.”

Brown also referred to his time as the head of the American Football Coaches Association. He said he asked has 17 board members to vote for what’s best for college football and not what’s best for their school.

“Is it best to have 50 teams and mega conference?” Brown continued. “What happens to everybody else? What happens to the Group of 5, to FCS and to Division II and III? Those are kids who want to play too. We have a wonderful game right now that is shared by everybody in the country, and we’re about to lose that.

“If we go to 50 teams, those teams have more money than anybody else. We’ll be like the NFL with a 16-team playoff. We’ll lose a lot of who we are, and we’ll lose fans. I say we need to slow down and see how to make money for conferences that don’t have as much to keep a balance. Let’s not do away with what we’ve got – the best game in the country.”

Army and Coastal Carolina bring together old and new