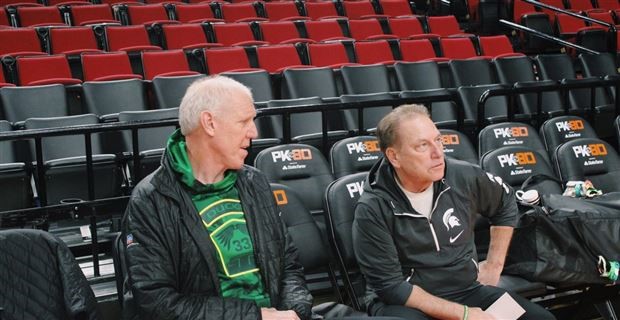 PHOTO: Bill Walton and Tom Izzo at the PK80 Tournament in the 2017-18 season in Portland. The Spartans beat DePaul, Connecticut and North Carolina on the way to the title with Walton working ESPN games.

“I told Dan (Guerrero, athletic director) in my interview that if I could do half of what Tom Izzo’s done at Michigan State, that that’s my goal at UCLA. To run a program, run it the right way, win the right way, graduate players, everything, they’re about team. Guys still make the NBA. They’ve got guys all over the NBA. And their guys win in the NBA because they’re taught winning in college.

“And I really did tell Dan that in the interview. There’s a way to run an elite program to make your university proud, not just to win games. It’s the way Coach Izzo has run his program for 25 years. So, the problem is he’s 25 years in and I’m six games in or seven games in, as far as building what we’re all about.”

Kareem Abdul-Jabbar, Bill Walton and John Wooden’s other legendary players needed time to get over that quote sounding to them upside down, but that was the state of UCLA’s program a year and a half ago when the Bruins met Michigan State in Maui.

That’s what made Mick Cronin’s comment so intriguing in his first year of rebuilding UCLA’s program.

College players today may not understand the context – and mistakenly think of Bill Walton as that crazy uncle on West Coast ESPN broadcasts — but Michigan State coach Tom Izzo has been around long enough to remember UCLA winning 10 of 12 NCAA titles between 1964 and 1975.

“We get as chance to play UCLA,” Izzo said in a Zoom call. “Phenomenally coached, and I mean that. Hell, we’ll have Bill Walton talking about the game. It’s a Thursday night game. It’s the only game of two major conferences. We’ll get exposure. There will be some positives.”

Rather than complain his Spartans (15-12) and the Bruins (17-9) meeting as East Region 11th seed play-in participants, Izzo looked at the advantages of a high-profile matchup scheduled for 9:57 p.m. Thursday at Mackey Arena on Purdue’s campus.

“It means we’ve got to beat a Hall of Fame coach.” Cronin said in his Zoom call. “One thing about Coach Izzo, the reason he has survived so long and had such a great career is they are never easily defeated. He refused to give in, give up. That’s why he was able to rally his team to the NCAA Tournament. That was absolutely no shock to me.”

Cronin was in first year in Los Angeles when the teams met in Maui, with Michigan State winning 75-62. The previous season (2018-19) the Bruins missed the NCAA tournament for the second time in four years, with one the seasons losing in a play-in game.

Cronin was hired after Steve Alford was fired with a 7-6 record into the 2018-19 campaign. The NCAA tournament isn’t new to Cronin, who guided Cincinnati for nine straight seasons to March Madness before taking the UCLA job, but none of UCLA’s players have participated in the post-season.

UCLA’s Tyger Campbell, a redshirt sophomore guard, was first team on the 10-member All-Pac-12 team. The 5-foot-11, 180-pound guard averaged 10.5 points and 5.6 assists. He was recruited out of La Lumiere School in Indiana, but he is from Cedar Rapids, Iowa.

Two other Bruins were on the five-member second team, sophomore guard Johnny Juzang (6-6, 210) and sophomore guard/forward Jaime Jacquez Jr. (6-6, 220). Juzang led the team with 14.0 points a game; Jacquez averaged 11.7 points and was on the All-Defensive team.

Izzo has Michigan State in the NCAA tournament for the 23rd straight year. Junior guard/forward Aaron Henry (6-6, 210) was a freshman on the Spartans’ 2019 Final Four team. Henry was a third-team All-Big Ten choice who played not only his best ball late in the season, but his most consistent stretch of is career. He has averaged 15.3 points, 5.7 rebounds and 3.5 assists.

Michigan State had to win five of their last seven games, including wins over No. 1 seeds Illinois and Michigan and No. 2 seed Ohio State, to earn an NCAA bid.

“What seed do we deserve?” said Izzo, repeating a question. “There was a time I was dying to be in the tournament. You know what, I still am. To think we’ve been in it 23 years – really, last year 24 straight years — is incredible. By the time I get to the hotel, I’ll think of it as incredible opportunity. I’ll tell my team the same thing. When we played that daunting schedule two weeks ago, I said it was filled with opportunities.”