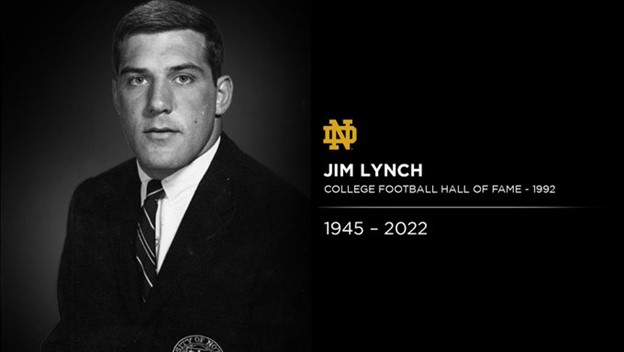 News stories that Jim Lynch, 76, a Notre Dame national champion and Kansas City Chiefs Super Bowl champion, has passed away will recount his many achievements.

This story, though, adds something else to his resume:

The Maxwell Award, like the Heisman Trophy, is presented to the nation’s top college football player. Lynch was a worthy recipient, but years later, when discussing the 1966 Game of the Century that matched Notre Dame and Michigan State, Lynch said the best football player in the country was a rival who played his position, Michigan State’s Georg Webster, a hybrid linebacker as a rover.

“George Webster should have won the Heisman Trophy that year,” Lynch told the late Mike Celizic, author of the 1992 book, “The Biggest Game of Them All.”

Lynch told me he still felt that way when I spoke to him in 2016 for a 50th anniversary story on the Game of the Century.

“He was so big and fast,” Lynch said. “He was the best player in the country.”

Notre Dame All-American center George Goeddeke, who later played against Lynch in the NFL as a center with the Denver Broncos, said such a comment by Lynch was typical of him.

“He was a great leader and a humble person,” Goeddeke said. “We were a hungry team as seniors in 1966, but there was no question he was our leader.”

The Maxwell Award, unlike the Heisman, has a history of honoring defensive players as the best in the country. Lynch had no problem conceding Webster was the best player, even though Lynch took home the trophy. In fact, Notre Dame linebacker Manti Te’o won the Maxwell in 2012 and Michigan State linebacker/rover Brad Van Pelt in 1972.

The Notre Dame athletics website included a past quote about Lynch from Ara Parseghian, the Irish’s late College Football Hall of Fame coach from 1964 to 1974.

“I am often asked who was the best player to coach and Jim Lynch always comes to mind,” Parseghian said. “He was All-America in every sense – talented, hard-nosed, and honest.”

Before the game, Lynch and Webster met at midfield as team captains for the coin flip, although Webster was a co-captain along with Clinton Jones. In the Lynch and Jones were involved in one of the game’s more spectacular plays.

Michigan State faced a second-and-9 at the Notre Dame 36-yard line, when Lynch intercepted a pass from Jimmy Raye at the Notre Dame 30. He returned ball five yards before he was hit by Jones, whose tackle flipped Lynch into a full summersault. He landed on his head, fumbled and Jones recovered. The possession ended with Michigan State taking a 3-0 lead on a 47-yard Dick Kenney field goal.

Jones still says to this day it was the hardest hit he ever delivered in a football game.

Notre Dame All-American center George Goeddeke said he visited with Lynch at his Arizona home in January. He said Lynch was doing well at the time, although his health was declining from a stroke five years ago and recent neurology tests that suggested CTE was present.

The ninth- and 10th-place finishers were defensive players from the segregated South, Arkansas’ Loyd Phillips and Georgia’s George Patton.