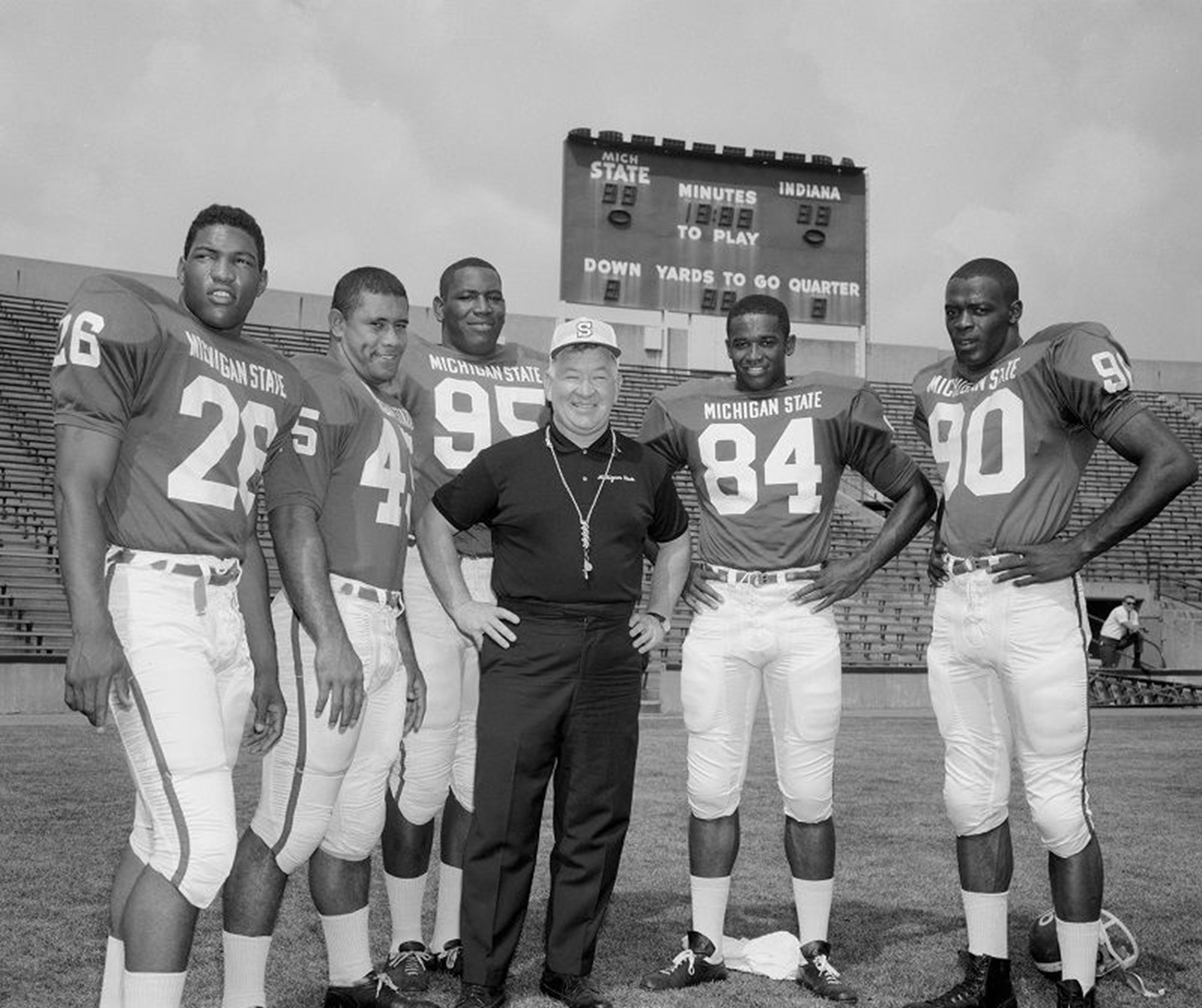 Michigan State’s plans for a statue honoring Duffy Daugherty and his 1960s teams that led college football integration are still on the drawing board, but Ohio State’s game Saturday at Michigan State provides interesting timing.

Michigan State, arguably, should have been at the forefront of such a movement based on its place in history. Daugherty assembled college football’s first fully integrated rosters while also recruiting the segregated South. In January, Michigan State athletic director Alan Haller announced the school plans a statue of Daugherty based on an iconic 1966 photograph of the College Football Hall of Fame coach standing with his five of two-time All-American players from the 1965 and 1966 national title teams. The statue will be part of the school’s renovated football facility scheduled to open in the fall of 2023.

“Duffy is an iconic coach who accomplished so much in his time,” said Smith, applauding the plans in a Friday morning phone interview. “He’s deserving of it. He was a leader who embraced diversity and opportunity for people of color.

“For Duffy, it wasn’t just about winning football games. It was more than that. It was about making sure opportunities were provided. That’s what people need to know about Duffy. I think it’s important Michigan State recognizes him and tells his story that is so important.”

Gene Smith was Iowa State’s athletic director prior to arriving at Ohio State in 2005.

“That picture is so important to have prevalent,” Smith said. “It’s not just about Duffy. It’s about what he and his players did.”

Smith has been Ohio State’s athletic director since 2005 after AD stops at Eastern Michigan (1986-93), Iowa State (1993-2000) and Arizona State (2000-05). Many of those years he was the only Black Division I AD or one of only two or three. He experienced what pioneers faced clearing paths.

When Smith arrived at Iowa State, he learned a student-led initiative had previously advocated honoring Trice. Smith’s leadership helped the stalled project get across the finish line.

“Other people were pushing it before me, but support is important,” Smith said. “I was able to get our president to embrace the plan. Somebody had to take whatever bullets were flying from people opposing it. Some people said Cyclone Stadium was a brand.

As the calendar flipped to the 21st century, schools spanning Syracuse in the East to formerly segregated campuses in the South to Wyoming have honored African American pioneers.

“It’s warming to have this kind of recognition emerge,” Smith said. “People come together at stadiums and arenas to create a sense of community. To have statues of prominent athletic people says a lot. There are always stories to be told. Jack Trice’s story is now told nationally. There weren’t people writing national stories about Jack Trice before the stadium was renamed. And his story is unbelievable and moving.”

An explanation for Michigan State failing to previously recognize its proud history was Daugherty never sought credit. He wasn’t a self-promoter. As a result, when he retired following the 1972 season, the school’s subsequent administrations, athletic directors and football coaches arrived from elsewhere. They failed to grasp Michigan State’s leading role under Daugherty. Generations of Michigan State students have cycled through campus earning degrees without awareness of their school’s pioneering history.

That has begun to change under third-year football coach Mel Tucker and Haller, a former player and assistant AD who was promoted in September 2021. Tucker wants his players to know Michigan State’s history, a task led by Darien Harris, a former player who is now Director of Player Relations and Program Advancement.

“You have to have people who are willing to step forward and be strong enough to support that kind of initiative,” Smith said. “Alan certainly is, Mel is, of course, and so is (basketball coach) Tom Izzo. It’s so important to have a collective team of an AD, football coach and basketball coach who gets it. It’s a great thing.”

Smith’s background adds to his appreciation of Michigan State’s history. He grew up in Cleveland, Ohio, where he was recruited by Notre Dame out of St. Peter Chanel High. Smith was a freshman on Notre Dame’s 1973 national title team and a first-year assistant coach on the 1977 national team. In those days, Michigan State and Notre Dame played annually.

“Michigan State’s 1965 and 1966 teams were phenomenal,” Smith said. “I’ve always admired Michigan State. From playing and coaching against them I’ve always respected how they played and what they did providing an opportunity for people like me.”

Daugherty smashed the quotas throughout college football of limiting Black players to a half-dozen or so on a roster. USC’s 1962 and 1967 national title teams followed such quotas with only five Black players in 1962 and seven in 1967. That fact about USC’s history has been overlooked and embellished by myths and fiction surrounding the 1970 USC-Alabama game

Notre Dame, like other schools, began to increase opportunities for people of color in the late 1960s under coach Ara Parseghian. Smith said his Notre Dame freshman class in 1973 was the largest number of Black players and Black students in school history. Dan Devine, a Daugherty assistant at Michigan State, succeeded Parseghian and continued expanding opportunities. Devine’s 1976 freshman recruiting class numbering 10 Black players was the most in program history.

This Saturday is about a football game, but the progress that has crisscrossed Smith’s career can be traced back to Michigan State, Duffy Daugherty and his 1960s players. And a trend that began at Iowa State.