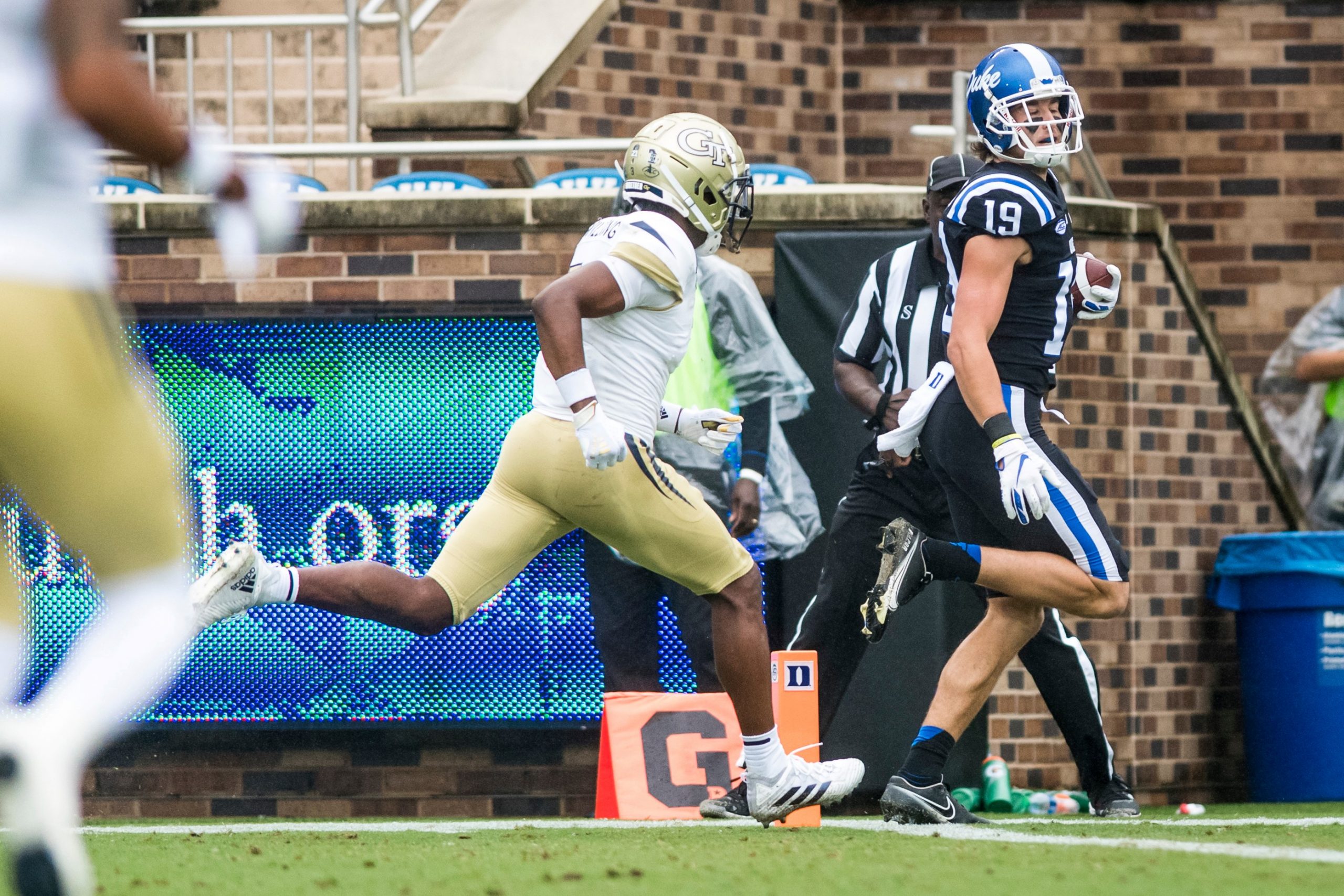 “We have a chance to be a really good team,” he said of the second half of the season.

The corners of Collins’ delighted smile seemed separated by the width of goal post uprights that proved the difference in allowing the Yellow Jackets (3-3, 2-2 ACC) to escape with a 31-27 comeback victory Saturday afternoon at Wallace Wade Stadium.

Duke missed two field goals or Labar could just as easily have stopped Duke coach David Cutcliffe for a quick post-game interview. And Cutcliffe no doubt would spoken similar thoughts about the Blue Devils winning and gaining momentum for the final six games.

Instead, Duke, a team that can’t afford to make mistakes to win ACC contests, spotted Georgia Tech a 14-0 first-quarter lead. Then, more mistakes left points on the field to drop the Blue Devils to 3-3 overall and 0-2 in the ACC.

“The biggest things again are penalties, failing in critical circumstances and getting beat in the kicking game,” Cutcliffe said. ““There is no magic formula. It’s getting what you want out of your team consistently and that falls on me. I do know what a well-coached football team looks like and what we have to do to arrive there or we’re going to have the same story everyone is tired of hearing, including me, time and time again.”

Duke sophomore kicker Charlie Hamm missed a field goal of 42 yards late in the second quarter with and 37 yards midway through the third period. Hamm also missed an extra-point kick in the second quarter, but a penalty on Georgia Tech allowed him another chance. He converted for a 14-14 tie.

Hamm’s 42-yard miss came with Duke facing a fourth-and-1 at the Georgia Tech 20-yard line. On a day Mataeo Durant carried the ball 43 times for 152 yards and one touchdown, Cutcliffe sent out the field goal team.

“I felt like with momentum – they get the ball first (in the second half) – we wanted points,” Cutcliffe said. “I thought it was an easily made field goal. We had already failed on fourth down. My nature is to go for it, but I decided we’d take the points.

“The points ended up not being there. Part of it is you’re danged if you and danged if you don’t. You never know what the turnout going to be. You hope you do because it’s the Power 5 level you should be confident in those types of kicks.”

In the final three minutes of the first quarter, with Duke trailing 14-7, Durant was stopped on third-and-1 at the Georgia Tech 20-yard for no gain. On fourth down, Holmberg was stopped for no gain to give up the ball on downs.

Duke later trimmed Georgia Tech’s deficit to 17-14 with 6:40 left in the second quarter on Durant’s 1-yard TD dive. After the teams traded punts, Duke senior cornerback Leonard Johnson intercepted a pass before he stepped out of bounds at the Tech 34-yard line, although he suffered a leg injury that knocked him out of the game.

Five plays later Hamm missed the fateful 42-yard field goal attempt that otherwise would have been good for a 17-17 tie. Or, you could say, Cutcliffe passed on a shot at a first down with the hope of finding the end zone for a 21-17 lead.

Duke took its first lead of the game at 27-24 with 5:06 to play in the fourth quarter and managed to force Georgia Tech into a three-and-out punt. Duke had 3:33 to erase form the clock, but the Blue Devils managed only one first down.

Durant appeared to have run for a second first down in Georgia Tech territory with 2:07 left in the game, but a 10-yard holding penalty instead resulted in second-and-15. The Blue Devils punted the ball two plays later.

The Yellow Jackets were out of timeouts when they took over with a first-and-10 at their 12-yard line with 1:42 to play. Georgia Tech fumbled on a second-down play, but retained possession when the bouncing ball went out of bounds.

One play later Yellow Jackets backup wide receiver Adonicas Sanders caught a 37-yard pass to the Duke 40-yard line. On third-and-6, Sanders caught a 36-yard TD pass while one step behind Lewis for the game-winning score. They were Sanders’ only two catches of the game.

The irony of losing a game Duke could have won was it came a week after the Blue Devils appeared unable to matchup with ACC opponents when they dropped their conference opener at North Carolina, 38-7. Georgia Tech had beaten North Carolina earlier in the year, 45-22.

Duke matched up physically with Georgia Tech but not elsewhere.

“The ACC is the probably the craziest conference in college football,” said defensive tackle DeWayne Carter. “We know it’s a tough loss, but every week is going to be a battle. We know we play in the conference of quarterbacks. We have a challenge to work hard every week.”