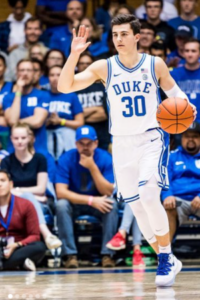 How does his new status translate to Savarino’s grandmother, Mickie, and mother, Debbie? Are they lobbying Duke’s coach for playing time? Yes, they understand basketball and the pressure a coach faces, but first they are a proud grandma and mom. After all, coaches dealing with proud grandparents and parents comes with the territory.

Savarino was asked at Duke’s basketball media day if his grandmother and mother have peppered Krzyzewski with questions about his playing time.

It wouldn’t be a complete basketball family – albeit headed up by a Hall of Fame coach – if it were any other way.

Savarino says “Coach” – he explained addressing Krzyzewski has gone from grandpa, to coach at the gym and grandpa elsewhere to now exclusively Coach – called him into his office on June 2 with the scholarship news. Krzyzewski also awarded a scholarship to another junior walk-on, Keenan Worthington.

“He brought me into his office the day before he was going to announce he was retiring,” Savarino recalled. “That same day he put me on scholarship. It was a surreal moment, one of the best days in my life.”

On June 3, Coach K met with the media to officially announce the 2021-22 season will be his last season and that assistant coach Jon Scheyer was named the head coaching in waiting.

“I knew it was coming soon,” Savarino said, “but I didn’t know how soon and how fast things would rotate from retiring and coach Scheyer named the head coach. It happened basically in one day.”

As for the family dynamic, Savarino explained his grandfather has long said his starting five begins with family: the Basketball Hall of Fame coach, wife Mickie and their three daughters, Debbie, Lindy and Jamie.

Krzyzewski, who married Mickie upon graduation from Army West Point in 1969, was 28 when he landed his first job as a head coach at his alma mater. He and Mickie painted bleachers, put down rugs and invited Cadets to their house on weekends. That was family life as the daughters grew up.

“They were accustomed to having the guys around,” Krzyzewski said at media day. “It’s always been the two of us as a career, and my daughters have blended in very well. Debbie was real young (at Army). We had Super 8 projectors. I’d be home and she’d be watching film with me. At the end I’d do those (hand) figures on the wall.

“My daughters know the game and they know the guys playing the game, and my wife does, too.”

By 1980, after five seasons at Army, Krzyzewski landed Duke’s job. He was on his way to becoming nationally known as Coach K, a time span that has included adding grandchildren to the family roster along with five NCAA title banners at Cameron Indoor Stadium. At Duke, though, among his many career upgrades was he had university staff to hang the banners and perform other facility maintenance tasks.

Debbie, a Duke graduate, joined Duke’s athletic department in 2002 as a primary fundraiser for the Michael W. Krzyzewski Human Performance Lab, the K-Lab. She’s now an assistant athletic director. Coach K adds his daughter’s life around the program and tenure in the athletic department has aided the transition facing Scheyer taking over as the head coach.

Over the past five decades, Michael Savarino believes his family/basketball life has been basically the same experience as his mother and aunts.

By middle school, Savarino said he was permitted to sit behind Duke’s bench at games, placing him within earshot of observing grandpa at his craft. Savarino’s evolution of understanding X’s and O’s – as well as the college game’s intensity – began with his prime seat, especially during heated timeouts.

“The best story I can say is not one in a particular game but one when Duke was down at a home game, which rarely happened,” he said. “Everybody huddles around Coach. Coach is drawing up a play and chewing guys out. I’m super locked in to hear what he says to the guys.

“There were times we made accidental eye contact and those were moments you never forget. You saw how frustrated he was or how red his face was or how many curse words he said. I learned all my curse words from him.”

Savarino, a 6-foot, 182-pounder, considered recruiting pitches until he opted to join the Blue Devils as a walk-on.

He spent his Duke freshman year on the bench, but his second season he gained limited minutes in mop-up time, including his career debut against North Carolina. He scored his first career point on a free throw in an ACC Tournament win, 86-51, over Boston College.

Now, he has prime seat as Coach K’s final year plays out. Krzyzewski writes books on basketball and leadership. Savarino has enough insight from an offspring’s vantage point to write a book on basketball and family

“It’s coming to an end, but he’ll move on,” Savarino said. “He’s going to be an even better family man than he already is.”