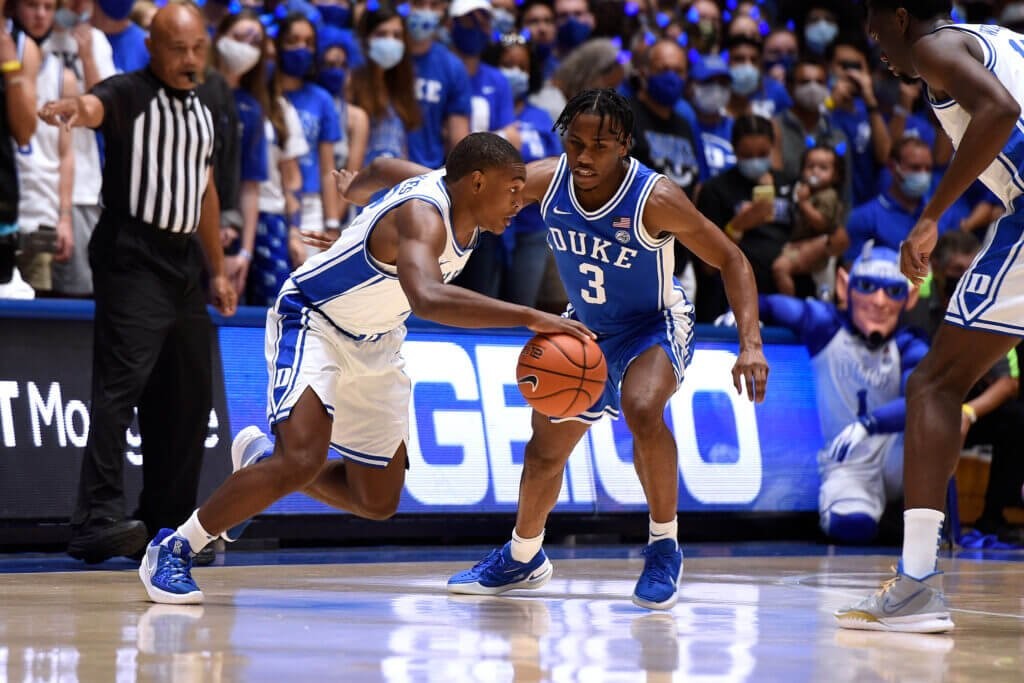 PHOTO: A.J. Griffin in the Countdown to Craziness exhibition game against Jeremy Roach (3).

Duke freshman A.J. Griffin arrived on campus confident in his basketball talent for plenty of good reasons, even though injuries limited his high school playing time the previous 24 months.

First of all, he possessed the genes. His father, Adrian Griffin, played in the NBA and is now an assistant coach with the Toronto Raptors.

Recruiting services maintained his 5-star ranking and as high as No. 5 player overall in the nation.  He was named to the McDonald’s All-American team. Recruit rankings don’t necessarily validate talent, but it was at the very least a nice ego boost.

But to a certain extent, despite the acclaim and projections the 6-foot-6, 222-pounder could break into Duke’s starting lineup, he was an unknown quantity to his first season. A knee injury his junior year at Archbishop Stepinac in White Plains, N.Y., limited him to 12 games. Then, he missed his senior year and ankle injury in addition to the COVID-19 pandemic disrupting play.

But the one aspect that remained a constant as support from Blue Devils coach Mike Krzyzewski and his staff. Griffin had committed on Nov. 10, 2019 of his junior season – a full year before Duke was obligated to offer him a formal scholarship offer to sign — but he didn’t sense buyer’s remorse in texts and phone calls from Durham.

“I thank them every day,” said Griffin in a Zoom call as the No. 7-ranked Blue Devils (4-0) prepare to face Lafayette (0-3) at 8 p.m. Friday at Cameron Indoor Stadium.

“They stayed committed to me and encouraged me through that time. They gave me confidence. When I first got here, Coach K said, ‘I believe in you. Just keep working.’ I feel that confidence from Coach and his staff is something you don’t get everywhere. I’m really grateful for it. I get support from teammates, too. They’re family.”

In love and basketball, there is nothing worse than turnovers and unrequited love.

Griffin also didn’t overlook recruiting services appreciating him. Recruiting websites are often dismissed by coaches and athletes as not part of the process, but Griffin noted his rankings remained high. Somewhere deep inside that was reassuring.

“The recruiting services knew I could play, and that confidence from them was huge,” he added.

But it wasn’t as simple for Griffin as picking up where he left off when he arrived at Duke for his freshman year.

Once formal practices began, he soon injured his knee on Oct. 9. The original projections had him out “indefinitely,” but he was with the team as early as the “Countdown to Craziness” Blue-White scrimmage and the first exhibition game against Winston-Salem State.

Griffin has come off the bench in all four games, including a season high of 11 minutes in the opener against Kentucky. He only scored two points against the Wildcats on 1-of-3 shooting, but he has worked into the offense. He hit three-pointers in the most recent two wins over Campbell (3 points) and Gardner-Webb (5 points).

“I’ve got a great support system here at Duke,” Griffin said. “Everyone being so supportive has helped me. I have confidence in my mental and physical adjustment. We have a plan, and they (coaches, teammates and training staff), are there with me.”

Griffin’s minutes will likely increase with time, but he has no complaints with his experience to date. He opened with a game at Madison Square Garden and is about to experience his fourth home game at hallowed Cameron along with the Cameron Crazies.

“It’s a  lot of fun being out there,” he said. “I’m having fun with my teammates. I love sharing the ball and seeing my teammates hit threes. I’m enjoying Cameron. It has been a fun part of the experience.”