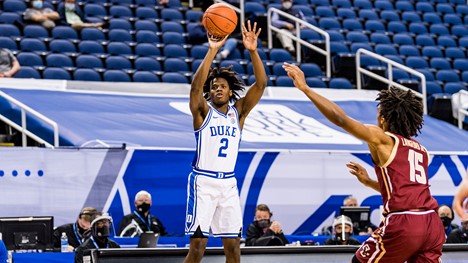 PHOTO (Duke Athletics): D.J. Steward scores against Boston College in the first round of the ACC tournament in Greensboro.

The consequences of college basketball Blue Bloods Duke and Michigan State struggling this season includes more than a lack of wins or having their NCAA tournament streaks threatened.

That lack of opportunities has prevented Duke coach Mike Krzyzewski and Michigan State coach Tom Izzo from emptying their benches. Coaches always want to reward their bench players for their hard work in practice, but this year the end of the bench also has been familial.

Duke, seeded 10th, cruised to an 86-51 win over the 15th-seeded Eagles in the first round of the ACC tournament Tuesday at the Greensboro Coliseum.

Coach K was able to play Michael Savarino, his grandson, for only the second time this year. Izzo, whose team doesn’t open the Big Ten tournament until Thursday, has played son Steven Izzo in eight games, but that’s down from 12 a year ago. And in the last three, Steven saw the court in three blowout losses.

Those aren’t so much fun.

Duke was having plenty of fun by the time the Blue Devils opened a 35-point lead in the final four miutes. Keenan Worthington and Mike Buckmire entered the game with 3:33 to play and Savarno with 3:18 remaining.

The rest of the Blue Devils urged them on, and nobody more enthusiastically than freshman guard D.J. Steward. He was jumping and waving a towel after leading the Blue Devils with 17 points.

“It’s so exciting to see those guys in the game,” Steward said. “They work so hard in practice behind the scenes getting us ready for our games. Just seeing them playing and competing was awesome.”

Savarino and Worthington are both listed as sophomores on the roster, although neither one played a year ago and can be classified as redshirt freshmen. Both scored their first career points.

If Duke wasn’t going to blow out anyone this year, it was by mercifully ending Boston College’s long season.

Duke, though, isn’t likely to enjoy a blowout victory against Louisville, a team that defeated the Blue Devils 75-60 on Jan. 23 at the Cardinals’ KFC Yum Center and completed a sweep with a 80-73 victory in overtime at Cameron Indoor Stadium.

Of Duke’s nine losses in a 9-9 ACC regular-season, eight of the losses were by single digits. The 91-73 loss at North Carolina in the regular-season finale was the only exception.

“I hope we can carry it over,” Krzyzewski said. “You never know about momentum Obviously we played really well today. They had fun playing. After losing three games in a row — two tough ones and then Carolina really kicked us — you can be down. I didn’t think our team was down.

“They really practiced well (Monday). They were very upbeat and they came in and did it again. They’ve been good kids. I hope they can keep it going against Louisville. I’m glad it’s an evening game. We get a little chance to prepare, get our guys some fluids, get them some therapy tonight and see what happens.”