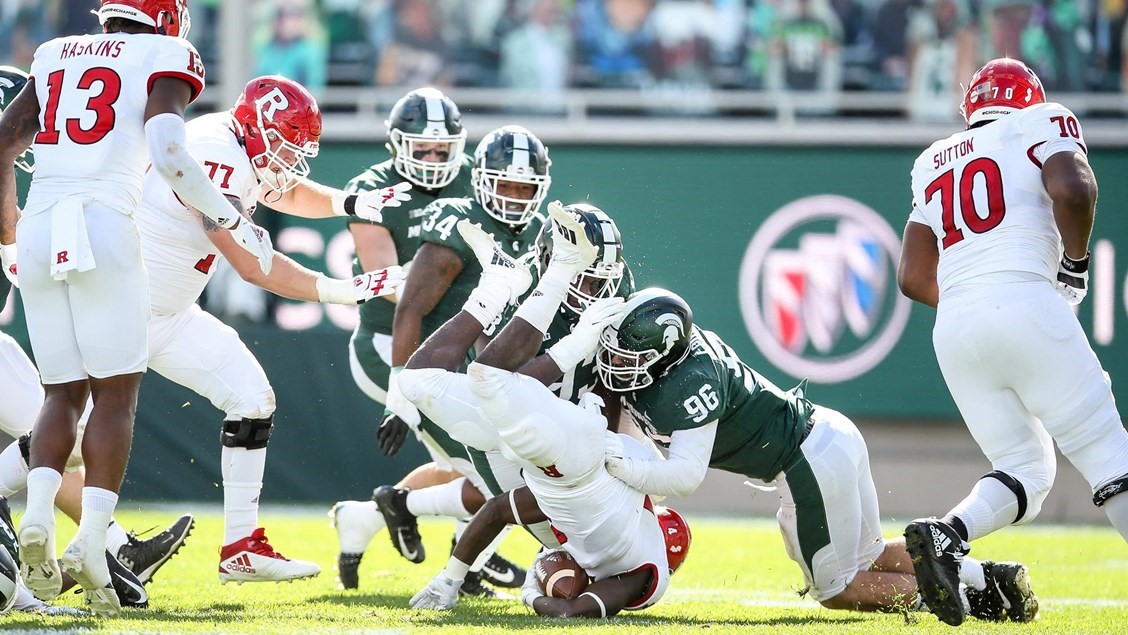 MSUings on the Spartans’ 37-20 loss to Rutgers to open the season and the Mel Tucker era on Saturday at Spartan Stadium. Rutgers, a Big Ten doormat since joining the conference in 2014, ended a 21-game losing streak in conference games. Note: Reaching back to my notes header from my days as the State News sports editor.

The Spartans turned over the ball seven times, the most in a game since 1981.

PICKING UP WHERE THEY LEFT OFF

Or, worse, it’s picking up with a result that still ranks as Michigan State’s most infamous loss to Rutgers, 17-13 in 1988. Those Spartans were coming off a Rose Bowl victory and ranked No. 15 in the nation, but lost to a team that finished 5-6. That was the beginning of the program becoming rudderless under George Perles.

After the Rose Bowl, Nick Saban departed as the Spartans’ defensive coordinator to the Houston Oilers as an assistant coach. Meanwhile, Perles was more interested in power plays than recruiting to play his preferred style, power football.

He leveraged threats to jump to the NFL for more money and a dual role as the athletic director (at a time Division I programs moved in the opposite direction, splitting the AD and head football coach jobs). Perles was eventually stripped of both jobs, with the football ax falling after a fourth straight year without a winning record.

The bright side for Michigan State fans there are more reasons to compare Tuckers to Dantonio taking over in 2007 than Perles losing focus. Tucker, a Saban disciple, isn’t lacking in work ethic and inner-drive. But he may face a bigger rebuild than anyone thought.

For Rutgers, that meant Greg Schiano’s second stint as Rutgers head coach picking up where he left off at the New Jersey school, a 9-4 record in 2011 as a Big East member.

It was his sixth winning season in seven years, including an 11-2 mark and No. 12 national ranking in 2005. But then he fell victim to the siren call the NFL temptress; he was bounced after two seasons as Tampa Bay’s head coach.

THROW OUT THE RECORDS

College football has been never more unpredictable than now due to the COVID-19 pandemic. Everything is out of whack for both the tangible factors of physical cohesion running an offensive and defensive scheme and the intangible of building team chemistry.

Some teams are handling it better than others, but there is no pattern to diagram why some schools are coping better than others. Only Clemson and Alabama, where 5-star recruits follow each other like lemmings, are immune with overwhelming talent. Maybe Ohio State to a lesser degree.

But, otherwise, defending national champion LSU lost two of its first three and had a fourth game postponed due to infections at Florida. Oklahoma lost at home to Kansas State and a second straight week against Iowa State.

Not every coach will receive a honeymoon season, but Tucker is and deservedly so. He faces an uphill climb.

Yes, Tucker and Schiano are both first-year coaches operating without the benefit of spring football, but Schiano was hired in December, Tucker in February. That game Schiano three and a half months to get to know his players person to person, Tucker a month and a half.

Michigan State’s inability to run the ball hurt Michigan State in Dantonio’s final seasons. It appears it is still a problem after the Spartans rushed for only 60 yards, averaging 1.6 yards per carry – 38 for 60.

Junior quarterback Rocky Lombardi, who earned the start to succeed Brian Lewerke over sophomore Theo Day and redshirt freshman Peyton Thorne, was sacked twice for 14 yards, but that’s not enough to skew the per carry average (sacks are subtracted from the rushing total in college football).

A winning quarterback has to be able to make players around him better, but Lombardi doesn’t have the immense talent to overcome a sub-par Big Ten offensive line. And without and line that can balance the offensive with a strong running game, it’s harder to provide the quarterback time to find open receives.

Lombardi finished 31-of-44 passing for 319 yards and three touchdowns, but he was intercepted twice, was forced to hurry throws and was the victim of dropped balls.

None of that prevents upcoming opponents from game-planning with eight men in the box and plenty of pressure packages.

“Obviously, we need to take care of the football. We put a premium on ball security. Those are things that can be corrected and will be corrected. He’s not a player that you see putting the ball on the ground in practice. I know that we can get that cleaned up. He’s a weapon for us. He’s hard to cover and he can make plays. We’re going to continue to work with him and get him forward to where he needs to be.”

“We have a lot of room for improvement. We’re going to come back next week like a completely different team. We have to clean up our play. We shot ourselves in the foot a lot today – a lot. We really have to clean up our play – play harder, play smarter, play with an edge, bring energy…We started off flat and things got out of control on us quick, but we kept fighting and stayed in the fight.”

“I think overall, obviously, at the end of the day my performance wasn’t good enough to win us the game. In my mind, I need to be better. Some things I did well was I completed most of my passes, kept the ball in play, and kept us moving in the right direction. I think the offense showed us some good things today. We were moving the ball. Obviously, we killed ourselves with the turnovers, but we were moving the ball and showing that we can be productive on offense and we can score touchdowns.”