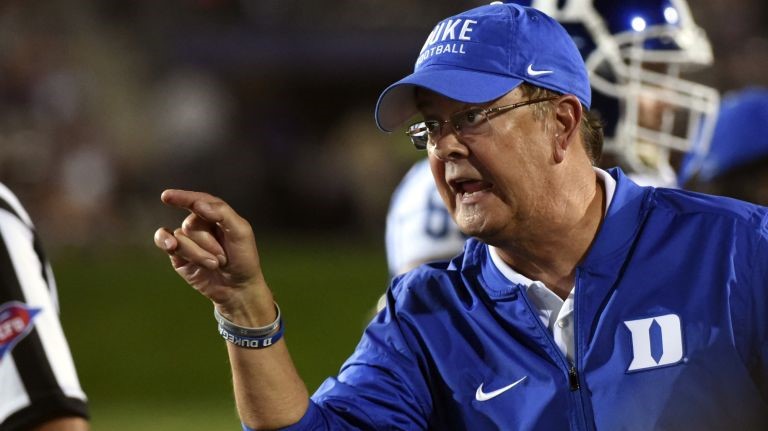 Duke football coach David Cutcliffe is back on the practice field for his 14th year that opens Sept. 3 at Charlotte. At the same time, Blue Devils basketball coach Mike Krzyzewski is about to prepare for his 42nd and final season in Durham.

Their intersection was 2008. Cutcliffe visited campus to interview for the vacant Duke job. He was weighed the task of taking over a program that had gone 2-33 the previous three seasons. The usual suspects interviewed him as a candidate, but Cutcliffe put in a request to meet with one more campus figure – Krzyzewski.

What was scheduled as a 15-minute session grew to one hour.

“We talked a whole lot about being successful at Duke,” Cutcliffe said. “How much he loved Duke and how he felt I would come to learn to feel the same way and respect the institution. How he went about to build a program, and you know I listened intently to what he said.”

Cutcliffe had been successful in seven seasons at Ole Miss (1998-2004) before he was unceremoniously fired just one year after his 2003 team, with Eli Manning at quarterback, was 10-3 to share the SEC West title.

“No offense to others on the interviews, but what I heard from him is what I have carried through these 14 years,” he said. “I think rightfully so. He’s a great teacher.  I hang on the what words he says. Not only myself — everybody in Duke athletics.”

Cutcliffe reflected the love of Duke upon turning around the program. Duke’s 10-3 record in 2013 led to Cutcliffe’s name surfacing as a candidate for vacant jobs, most prominently the Michigan job in 2015. Cutcliffe quickly dismissed the rumors now seven years in the rearview mirror.

Duke is coming off disappointing 5-7 and 2-9 seasons after making bowl games six of seven years, but his job was never in jeopardy to return in 2021. He has one last season to double up with Coach K in college athletics’ two highest profile sports.

“I think this institution will not realize how much they miss him until it happens,” said Cutcliffe on Coach K retiring and handing the reins to the head coach in waiting, Jon Scheyer. “I love Jon Scheyer. I’ve known him since he was a player. Duke basketball is in good hands.”

Then Cutcliffe mentioned to the Cameron Crazies’ pregame routine of bowing as Coach K takes the court before games.

“I bow too when he walks on the floor,” he said. “I feel the same way. He’s a U.S. Military Academy graduate, a gold medalist, a great husband father and grandfather. He’s been a great example for all of us to be around in Duke athletics.”