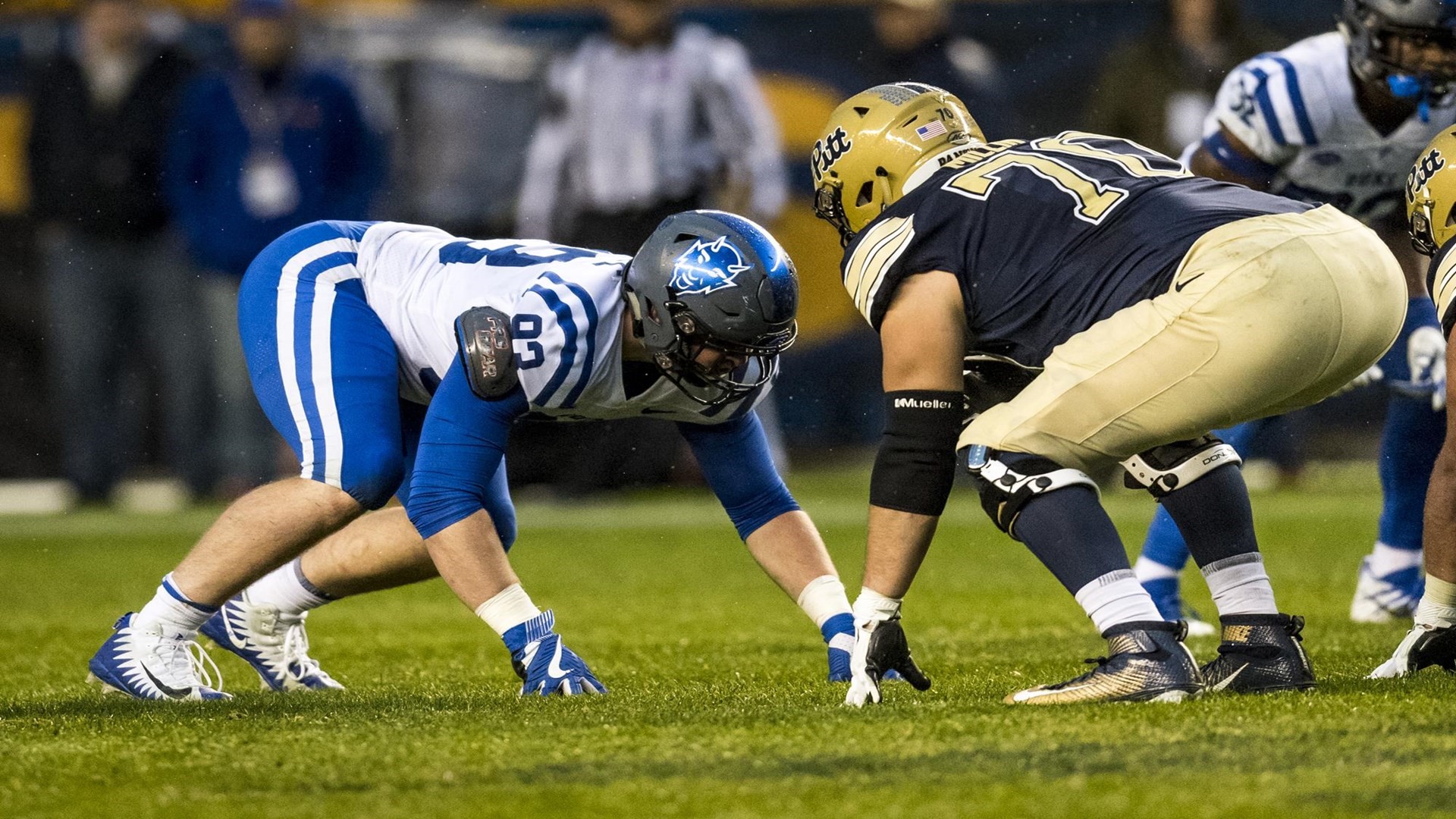 Duke defensive tackle Ben Frye checks in as a 6-foot-3, 255-pounder. If he played in another era, say alongside of College and Pro Football Hall of Famer Alan Page, he’d be a big guy. Page weighed 245.

This week’s opponent is the biggest of the three, Virginia at 313. The Blue Devils (0-2, 0-2 ACC) travel to Virginia for a 4 p.m. game in Charlottesville. The Cavaliers are playing their opener, having had last week’s Virginia Tech game postponed due to Covid-19 infections on the Hokies’ roster.

Frye, though, doesn’t prepare for opponents worrying about heights and weights; he studies names and scouting reports. It’s enough to work his way into the starting lineup as a redshirt junior with eight tackles and a half-tackle for a loss.

He’s in the lineup not because Duke lacks anyone bigger or better to play alongside senior Derrick Tangelo (6-2, 310), who also has eight tackles. Frye is scoring takedown points in practice and games.

His secret isn’t a tightly held such as Tom Brady’s training regimen to hold off Father Time. It’s as simple as wrestling — the traditional sport, not the bastardized pro version cable TV converted into a cash cow with Hollywood theatrics.

Real wrestling is one of the Greek’s ancient Olympic sports, second only to running among humans.

“He was a great wrestler in high school,” Duke coach David Cutcliffe said. “He’s got great hands and feet. He’s tenacious. He’s got a lot of fight in him. I love his spirit and attitude.”

Frye was an Ohio state runner-up and two-time all-state honoree while competing at Dublin Coffman.

“I’m obviously on the lighter side for defensive tackle,” Frye said. “But the same things I learned in wrestling you can use as a D-lineman – your hands, shedding blocks and finding angles. I’m always wrestling bigger dudes than me. It definitely helps me at the line of scrimmage.”

Three athletes in the pantheon of wrestling/football stars to know are Curly Culp, Reggie Williams and Stephen Neal.

Culp (6-1, 265) was the 1967 NCAA heavyweight champion at Arizona State and 14-year NFL defensive lineman. He was a six-time Pro Bowler and Super Bowl champion with the Kansas City Chiefs.

Williams (6-1, 228) went to Dartmouth College as a lightly recruited linebacker. He was enshrined into the College Football Hall of Fame and won an Ivy League heavyweight title prior to a 14-year NFL career (1976-89) with the Cincinnati Bengals.

As a rookie, he had to explain to some of his teammates there was a difference between the NCAA, FIFA’s world championship titles and TV crowns. In the 1999 NCAA final, he completed the first of back-to-back NCAA titles by defeating Brock Lesner, now one of pro wrestling’s bigger names. Neal has said when asked about entering pro wrestling, “I’m not an actor.”

So why don’t more football linemen take up wrestling for a techniques edge?

One reason is Americans sports are focused on one-sport specialization. The age old answer, high school wrestling coaches say, is they have a hard time getting star football linemen to compete in the winter. Their egos can’t handle being flipped by smaller opponents.

Frye has been doing that in what’s developing as a breakout season after being slowed early in his Duke career by a torn knee ligament that required surgery. He redshirted as a freshman in 2017, played in six games before his 2018 knee injury, and played in eight games a year ago. He finished 2019 with nine tackles, 1.5 for a loss and a half-sack. He’s close to topping all those numbers entering only his third start.

“(The Virginia game) comes down to a physical line of scrimmage,” Frye said. “I know they have an older O-line, but I think we have a good defensive line; the battle will be won up front. That’s the key to success.”

Frye, Tangelo and redshirt freshmen backup Dwayne Carter (6-3, 300) have been strong enough in the middle, an improvement over a year ago, defensive ends Victor Dikumeje and Chris Rumpf II, both NFL prospects, can focus on penetration from the outside. Carter actually tops Tangelo and Frye with 10 tackles. The Blue Devils have reduced their yards rushing per game from 181.6 a year ago to 131.0.

If Frye’s size disadvantage does catch up with him, Carter can relieve him to level the scales.

Next year he may be starting alongside Frye as long as they hold off what Cutcliffe’s considers a cast of promising young defensive linemen.

“I think we’ve got some really good young defensive linemen that we’re going to see a little bit more of as the season progresses. I’m excited about that position now and as it’s coming forward.”

Gilbert, a senior that missed all of 2019 and the final 11 games of 2018 with a hip injury, had surgery to remove a bone fragment from his foot. Blackwell, a second-year starter, suffered a torn meniscus in his knee.

Redshirt junior Leonard Johnson (6-1, 190) and redshirt sophomore Jeremiah Lewis (6-1, 190) are listed as starters on the updated depth chart. Johnson started 12 games with two interceptions a year ago while replacing Carter.

The backup to Johnson is starting safety Michael Carter II and to Lewis it is redshirt freshman Tony Lewis (6-2, 195). If Carter has to shift to cornerback, his listed backup is sophomore Jalen Alexander (5-11, 160).

Many schools don’t reveal injuries so close to a game. Cutcliffe has long been an advocate of the ACC and NCAA adopting a policy of teams releasing authentic injury reports.