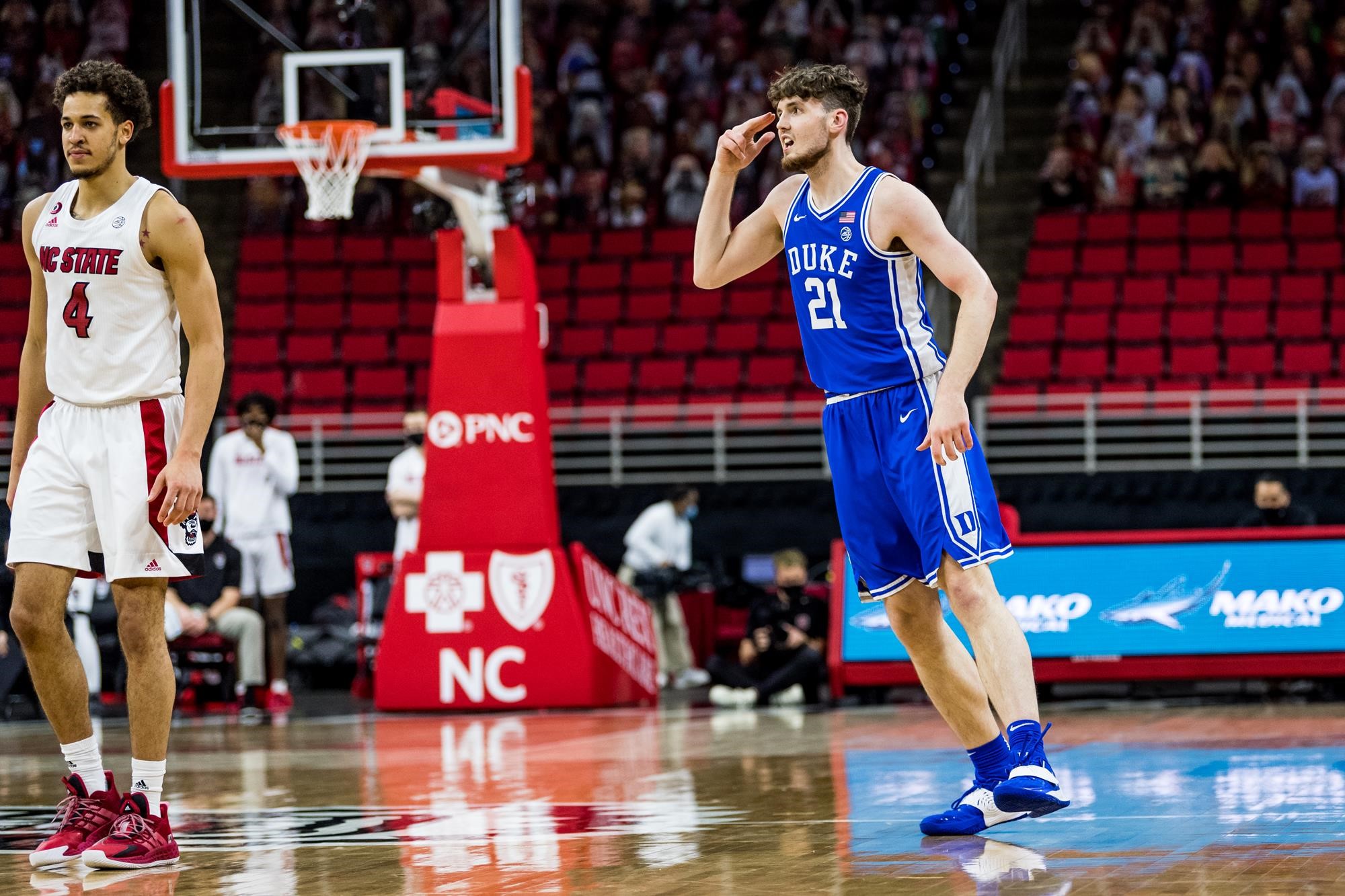 When Duke loses, a cloud hangs over the Blue Devils failing to extend their streak of 24 straight NCAA Tournaments. A Duke win replaces the cloud with expectations. It’s enough pressure for a team to start pressing and show up on game day forcing inexplicable plays trying to do too much.

But for all of Duke’s woes this year, the players haven’t suffered that pratfall.

The Blue Devils evened their records as they rolled over N.C. State 69-53 on Saturday afternoon at PNC Arena. Duke is now 8-8 overall and 6-6 in ACC play, while the Wolfpack dropped to 8-9 and 4-8 in the ACC.

“We’re taking it one day at a time,” said sophomore Matthew Hurt. “We don’t look at social media like that, with us not making the tournament; that’s not it right now. We’re focused on the next game and our next game is Wake Forest. We’re going to get ready for Wake forest and trying to improve every day. We just try to win game by game.”

Hurt led the Blue Devils with 24 points, hitting 6-of-7 from three-point range.

“He was quicker than he’s been in over a month, and that’s after a couple really hard defensive practices,” Duke coach Mike Krzyzewski said. “He seemed more alive today. He was quick and he got his shot off quick. He had a heck of a game. With this scoring game – it’s a lower scoring game – to get 24 points, 6-for-7 from three. But he got his shot off quicker. He just seemed bouncy.”

Krzyzewski emphasized defense in practice after allowing 90-plus points in their last two games, losses to North Carolina and Notre Dame.

N.C. State freshman guard Shakeel Moore led the Wolfpack with 13 points. D.J. Funderburke and Jericole Hellems added 11 each. N.C. State has lost four of five since losing Devin Daniels with a season-ending knee injury in a win over Wake Forest.

North Carolina gained a grim view of how far they are from Top 25 stature as the Tar Heels lost 60-48 to Virginia Saturday night in Charlottesville.

“A lot of them came on screens on the ball, and we didn’t communicate the way we’d like to communicate,” North Carolina coach Roy Williams said. “So, either a big guy or the point guard is guarding them out there instead of one guy chasing the point guard and the other guy guarding nobody, being caught in between. So, we did a very poor job of that. It’s hard to simulate that in practice. We don’t have a four and five man on the Blue (scout) team that can go out there and make all those shots like they did.”

Jaybron Harvey wants to build something at UNC