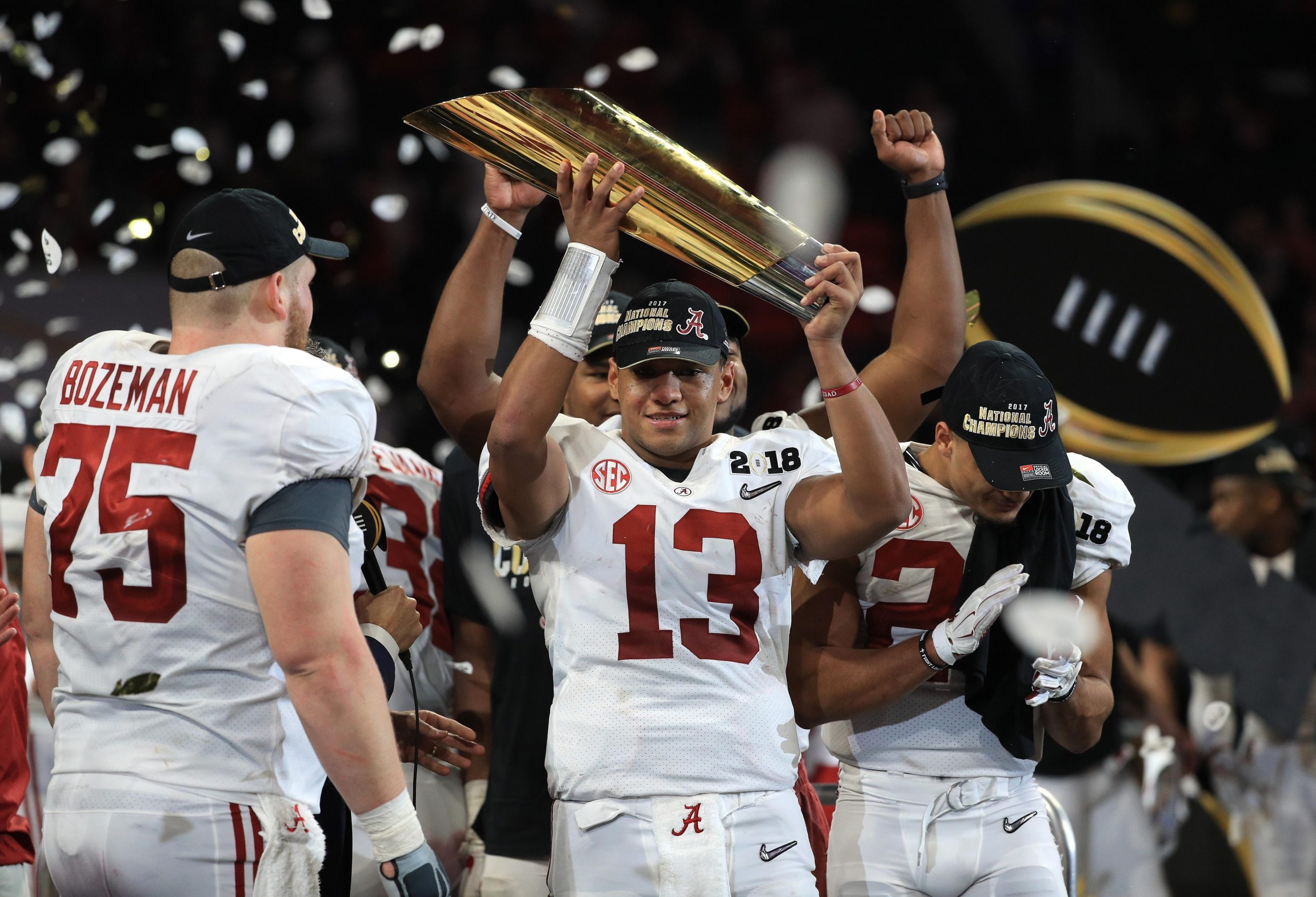 PHOTO: Tua Tagovailoa leaving Hawaii for Alabaster, Alabama, is just one of many examples of a handful of schools dominating recruiting rankings on their way to College Football Playoff berths.

Welcome to the annual Alabama-Clemson Invitational.

Ohio State has joined the two mainstays again, but depending on a particular year only two or three more schools with the top recruiting classes have the talent to qualify. That means Alabama, Clemson, Ohio State, Oklahoma in addition to either Notre Dame or one of two wild card SEC entries, LSU or Georgia.

There’s no longer a mystery to the College Football Playoff field, despite ESPN wanting us to think otherwise with its weekly TV show that ultimately is good for only generating corporate revenue. I didn’t watch a single episode this year. Did you? Surely you knew the first three picks were automatics. I was willing to wait to hear the news on the fourth team.

College football is broken. It’s been undone by an unexpected intersection of the Internet and social media funneling all the top players to the same half-dozen schools. They follow each other like lemmings with their only focus on who was in last year’s playoffs.

The four-team format unintentionally has exasperated the trend like an insider trading game on Wall Street without the nefarious element.

Not even representing a state with Trump sycophant Lindsey Graham as a U.S. Senator raises concern among recruits, Black and White. They’re oblivious to playing for fans in a a state that nearly elected an accused pedophile, Roy Moore, over Doug Jones, the only Alabamian to prosecute the KKK killers of “Four Little Girls” in the 1963 bombing of the 16th Street Baptist Church in Birmingham. Alabama citizens made up for it the next round, though, electing Tommy Tuberville, who has said he favors voting restrictions designed to disenfranchise African-Americans.

— Alabama won the SEC championship game for the fourth time in the last six years. The Crimson Tide is in the College Football Playoff semifinals for sixth time in seven seasons and fourth as the No. 1 seed. Alabama coach Nick Saban has 25 first-round draft picks every year.

The one year the Tide didn’t win the SEC West they received a mulligan, entering the 2017 field as essentially the SEC third-place team behind East champion Georgia and West champion Auburn.

— Clemson won the ACC championship final a playoff bid a sixth consecutive season. The Tigers missed only the inaugural tournament in the 2014, a year before Clemson’s nouveau riche recruiting muscle was flexed.

— Ohio State won the Big Ten championship for the fourth straight year and fifth in seven. The year the Buckeyes missed the title game in both 2015 and 2016, but in 2016 they received a mulligan as essentially the third-place team behind Big Ten East champion Penn State and Big Ten West champion Wisconsin. This year is the Buckeyes’ fourth playoff trip overall; the Big Ten has been shut out two of the seven years.

— Notre Dame is an independent – despite playing a COVID-19 season in the ACC this year – but it has managed to earn a playoff bid for the second time in three years. This time it’s as the ACC regular-season champion, but the loser to Clemson in the title game.

— The SEC wild cards have been LSU (2019) and Georgia (2017), two schools that also consistently finish atop the recruiting rankings, but their fans don’t have the edge of Nick Saban coaching their all-star roster.

The first three years, the CFP field had yet to devolve into the usual suspects. Florida State and Oregon advanced in 2014, Michigan State in 2015 and Washington in 2016.

So, what do the four repetitive conference champions we have now – Alabama, Clemson, Ohio State and Oklahoma – share in common? Coaches? Absolutely.

But that’s not the real reason college football is less balanced than at any other time in 151 years since Princeton edged Rutgers 6-4 in 1869.

But more significantly, you can draw a straight line from the top recruiting rankings to the CFP field. Players follow each other like lemmings to the same four or five schools finishing in the top five but not lower that the top 10. Saban is a great coach, to be sure. But better than Bear Bryant? Bryant never had the overwhelming talent edge on opponents that Saban enjoys.

It’s true recruits have always had favorite schools and tried to convince top players to pick the same school. But not like now in the Internet age. They know who the top recruits are in their class before their junior. They meet each other on spring and summer camp circuits. They keep in touch with group texts and social media.

Another factor, a big one, is regional pull means little to athletes these days. How else to explain the Tagovailoa family uprooting from Hawaii for Alabaster, Alabama? I talked to a Hawaii athletics department member last year when I covered Army at Hawaii. She was from Alabaster. She didn’t understand it, either.

Once Alabama, Clemson, Ohio State and Oklahoma had a foothold in the brave new world of recruiting, they’ve been hard to knock off their top spots.

The recruiting funnel to five or six schools is reflected in the Heisman Trophy voting. The finalists last year were Joe Burrow, LSU; Jalen Hurts, Oklahoma by way of Alabama; and Justin Fields, Ohio State by way of Georgia.

The 2017 finalists were an aberration: Baker Mayfield, Oklahoma by way of Texas Tech; Bryce Love, Stanford; and Lamar Jackson, Louisville. Mayfield doesn’t win the Heisman at Texas Tech without the talent surrounding him at Oklahoma. Love and Jackson, two dynamic athletics, are refreshing breaks from the status quo. Their prodigious numbers were too bright to be overshadowed.

The 2014 team might have marked the end of an era – 2017 notwithstanding – with Marcus Mariota, Oregon; Melvin Gordon, Wisconsin; and Amari Cooper, Alabama.

Over the years the NCAA has done what it could to foster competitive balance in college football. That was the reason it limited schools from appearing on regional and national television once a year until the rules were struck down by court rulings in 1984.

In 1973, college football limited scholarships to 105 on a roster. Coaches such as Michigan’s Bo Schembechler decried it as the end of major college football, but the rule designed for balance served its purpose.

NCAA rules also prevented coaches such as Alabama’s Bear Bryant, with an unlimited budget, from notoriously signing players just so they won’t play for Auburn, Tennessee or Mississippi. The NCAA also had to pass a rule against athletic dormitories after Bryant had a special one built for his program (all football excesses begin in the SEC).

The college limit now 85, in part for competitive balance and also due to Title IX requiring schools to balance male and female athletic scholarships totals. Not every school had to eliminate wrestling with 85 as a the limit.

But there is no rule for the NCAA to deal with social media. Something will ultimately disrupt the balance of power, but for now college football has been reduced to tournament for the newly redefined Power 5.

During Sunday’s ESPN CFP wrapup, Clemson coach Dabo Swinney was a guest. He lauded his team for overcoming losses to the NFL draft and quarterback Trevor Lawrence missing time due to COVID-19.

What he didn’t mention is Clemson has backups better than starters among his rivals. Other schools might breaking into the Top 10 recruiting classees, but finishing in the Top 10 year after year is a solid foundation tough to match with one year of peaking.

Oregon had a class come together in the 2014 CFP, Michigan State in 2015 and Washington in 2016, but they didn’t have back-to-back-to-back classes to sustain the talent edge that year.

But for now, expect the same four to five to six teams in the running for the 2021 College Football Playoff. Just follow the recruiting rankings.