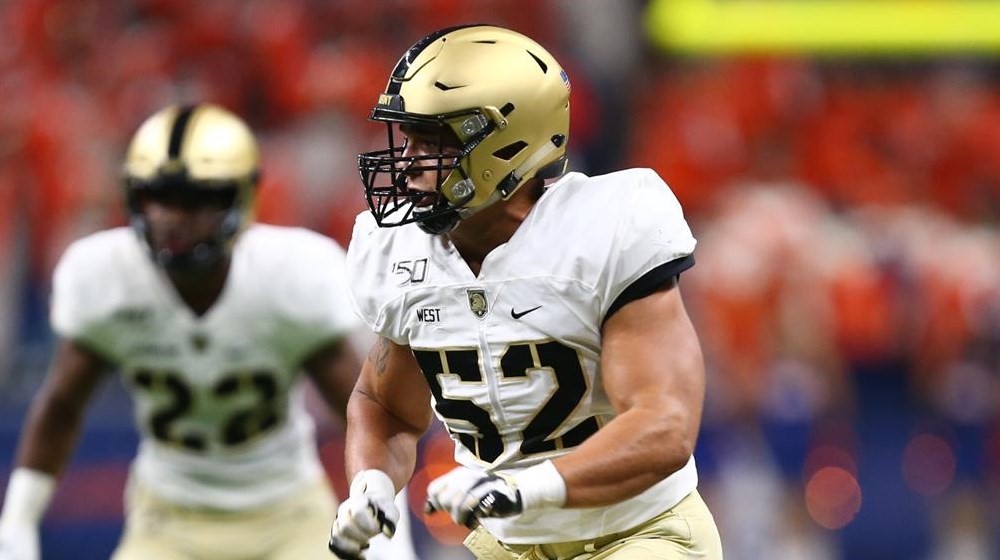 San Diego high school football’s vast talent pool has formed over the years select clubs at the next levels.

The four Heisman Trophy winners have been the most recognized, Marcus Allen, Lincoln and USC; the late Rashaan Salaam, La Jolla Country Day and Colorado; Ricky Williams, Patrick Henry and Texas; and Reggie Bush, Helix and USC. Bush had to return his trophy for NCAA violations, but three or four trophies, one word still applies. Exclusive.

Another club is the Pro Football Hall of Fame. Five years ago, the late Junior Seau, Oceanside, joined Allen as the only other San Diego prep alumnus enshrined. Elite.

Well, another choice club – this one requiring more than football skill — added only its second member at the start of Army’s fall camp, Oceanside’s Amadeo West. The West Point senior defensive end was named a team captain. Reverence.

“To be elected by your teammates to a leadership position at the most prestigious leadership school in the world is special,” said Army football coach Jeff Monken. “Let me tell you, there isn’t a guy on this team that doesn’t respect him. And he’s earned it by the way he treats people and the relationships he’s built.”

There is added stature to earning the captain’s role at an institution founded 218 years ago to develop leaders. Among San Diegans at the three service academies, Army, Navy and Air Force. Morse alumnus Gervy Alota started the club as a Navy team captain at Annapolis. He was a senior safety in the 1997 season, which included a homecoming game at San Diego State.

Accepting an academy appointment includes five years military service during an endless war on terrorism. Only 0.6 percent of the nation’s population volunteers to serve in the military.

Let that sink in.

“I’m very fortunate to be recognized by my peers,” West said. “It’s a great honor, but ultimately my responsibility as a team captain is to represent this team to the best standard I can with every action. I hope to do so. I don’t think I could have imagined being a team captain when I came here. My goal was just to contribute to this team and to be the best person I could be.”

Alota remained in the Navy beyond his five-year hitch and is now a Captain based in his hometown. On July 10 he took command of the USS John P. Murtha, an amphibious transport dock ship. His recent assignments were as Deputy Director for Surface and Mine Warfighting Development Center Sea Combat Division and as Deputy Executive Assistant for the Vice Chief of Naval Operations.

Although the COVID-19 pandemic remains a threat to college football, Army is scheduled to play an 11-game schedule, with its opener Sept. 5 against Middle Tennessee at Michie Stadium.

“I’m not surprised,” said Oceanside athletic director Brad Hollingsworth. “He played here with some other talented kids, but I always felt he had the upside and the grades. We’ll make sure kids know about him as a role model. It’s hard for him to come around here (with his academy commitments), but we’ll put your story on our website.”

He spent 2015 at the Army prep school prior to his West Point admission and was off to a promising start his freshman year in 2016, playing in five games. But then an injury plague hit.

West suffered torn knee ligaments in 2017 fall camp. He was making rehab progress toward 2018 spring football until he injured his Achilles tendon.

That sidelined him the first half of 2018, but upon returning to the field he started slowly. Frustrated, he called home after the Eastern Michigan game, which he considered the worst performance of his career. His mother, Maria Lonedico, encouraged him to keep working. That’s was enough for him.

“My mom has worked tirelessly to honor and me and my sister (Lucia, a 2017 Oceanside grad) for us to be the people we are,” West said. “I wouldn’t be the leader I am without her. I’m very fortunate.”

West began making plays. He earned his first start in the 2018 Army-Navy Game, recording a season-high six tackles. But his play of the day was without a stop. It was a teamwork effort in the decisive fourth quarter.

West tied up two blockers on the left side of Navy’s offensive line, leaving star outside linebacker Kenneth Brinson free to blitz. Brinson recorded a strip-sack and fumble recovery that set up the game-winning score in a 17-10 victory. West played well again in Army’s 70-14 win over Houston in the Armed Forces Bowl. Army finished 10-2, and West felt poised for a big 2019 season.

But three games into a highly anticipated season, which included a near-upset of Michigan in the second game before the Black Knights settled for an overtime loss, West’s season ended. He suffered a torn bicep a week later in a win at UT San Antonio.

“It definitely was my most reflective injury,” West said. “I learned the most about myself in terms of life after football, because I didn’t know if I’d play again. You have to find your own identity. You’re not just a football player.

West, a 6-foot-2, 245-pounder back at defensive end after playing outside linebacker last year, received a waiver to return for a fifth football season when the injury prevented him from completing his “combatives training” courses.

“I just hope he can stay healthy this year,” Monken said. “He’s had such a struggle with injuries. After last year’s injury, my heart broke for him. He’s an emotional guy loved by his teammates. I know he’ll be a productive player. I know he’ll play hard. I know we’ll get a lot out of him. He’ll make everybody else on the field better.”

Without recording a tackle in 2020, West has secured his place in an exclusive San Diego club.