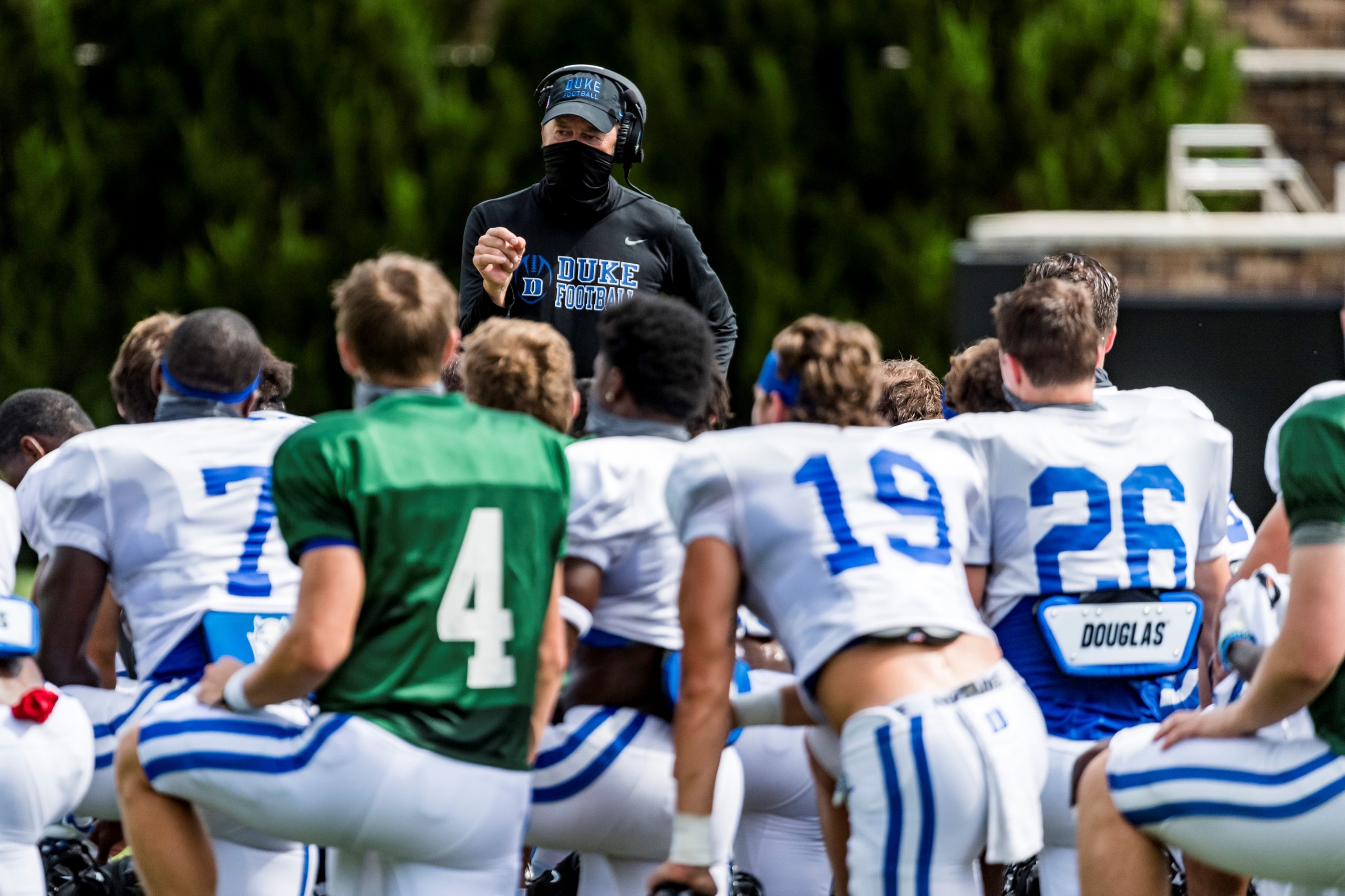 Kirk Herbstreit needs to reacquaint himself with Duke coach David Cutcliffe and his players.

If any team had reason to be ready to wave the white flag — as ESPN’s Herbstreit characterized Michigan regarding its upcoming annual game with Ohio State — it’s the Blue Devils. They’re frustrating season has dropped to 2-7 overall and 1-7 in ACC play following last week’s 56-33 loss at Georgia Tech.

But Duke is eager to play its final two games, although it had the option of not accepting the ACC’s reshuffled plan that added to the Blue Devils’ schedule a Dec. 12 trip to Florida State.

“Well, I can’t say enough about the character of this team, of this program,” said Cutcliffe in his weekly virtual media call.

Duke opened the season with optimism, playing Notre Dame into the fourth quarter in South Bend before falling 27-13. The game was closer than the score suggests against a team likely to end up in the College Football Playoff.

But not much has gone right since then.

The COVID-19 pandemic that has altered preparations everywhere but impacted some schools more than others. Duke was one of the last campuses to open for athletes to return in the summer. Then, as the season unfolded, the Blue Devils have been plagued by injuries, particularly in the secondary. The season continued with bad bounces of the ball and COVID-19 outbreaks at other schools resulting in postponed or canceled games.

When the Blue Devils returned from Georgia Tech, they expecting to play their scheduled Saturday home date against Florida Stat as a season finale. But the ACC rescheduled No. 10-ranked Miami (7-1, 6-1 ACC) instead of Florida State. Duke and the Hurricanes meet at 8 p.m. Saturday at Wallace Wade Stadium.

Miami has been off since Nov. 14 due to a COVID-19 outbreak that included head coach Manny Diaz. With only one ACC loss, the Hurricanes need two more games to round out the ACC race that qualifies the first- and second-place teams into the conference championship game on Dec. 19 in Charlotte.

One day after the change to Miami, the ACC announced it added Florida State (2-6, 1-6 ACC) back to the schedule. The Blue Devils will travel for a Dec. 12 game in Tallahassee.

Cutcliffe said his players, seniors through the freshmen classes, have bonded and maintained their enthusiasm.

“These young men – I tell people all the time we lead the country in great parents and their value systems are in place. So, from senior down to true freshman, it’s been inspirational as a coach. It reminds me of why I got into coaching. That’s to hopefully mentor young people and to be around great young people.

“Nobody enjoys getting beat particularly me, I’ve never been a good loser, but I will say this this has been an inspirational year of football for us here. Nobody has run away from any part of it. I told our staff the same thing yesterday. I’m also very proud of this staff and the work they’ve put in and the leadership they’ve displayed for these players. I could not say that strongly enough.”

Miami arrives in Durham with plenty of motivation to continue playing as a Top 10 team hoping for a backdoor entry to the ACC title game. Second-ranked Notre Dame (9-0, 8-0 ACC) has already clinched a berth in the ACC title game. The Irish hold the tiebreaker over No. 3 Clemson (8-1, 7-1 ACC) with its 47-40 double-overtime win over the Tigers.

Clemson finished the regular season Saturday at Virginia Tech (4-5, 4-4 ACC) and with a win can clinch its ACC title berth. The Tigers hold the tiebreaker over Miami with its 42-17 victory against the Hurricanes.

Cutcliffe added another comment about how his freshmen class has coped with such an unusual year. Social distancing has been more effectively enforced on Duke’s campus than other schools. Duke hasn’t been the school responsible for any postponed or canceled games.

“I want people to think about this,” said Cutcliffe, mentioning the range of emotions a freshmen experiences leaving for college in the summer until now. “These guys are so excited. They’re getting ready to start college. I can barely remember going off to college but that’s an exciting time to get ready to play college football.

“They come in here in mid-July, really unprepared not knowing what to expect. No real rigid workouts with us before. Then they start camp, but they go nowhere. They don’t really go to college. They go to class virtually. They’re not meeting new people. They’re living in a room by themselves. They don’t even have a college roommate. So, what I’m telling people and people need to understand, this has been a unique challenge for young people.”

One of the problems with modern college football is the season has become focused on the four teams that make the playoffs. It’s one reason the top recruits follow each other like lemmings to the same campuses in Tuscaloosa, Clemson and Columbus.

That mindset had something to do with Herbstreit being out of touch with the rest of college football while raising his white flag comment.