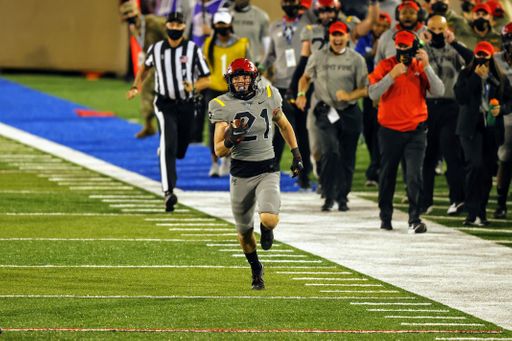 I first brought this subject up with Air Force coach Troy Calhoun before October’s Navy game, long before the COVID-19 postponement of Air Force-Army Nov. 7 date rescheduled in a winner-take-all game for the Commander-in-Chief’s Trophy.

My suggestion was Air Force-Army deserves a special day instead of buried in the regular season. Maybe a “kickoff” August game to serve as a bookend to the historic Army-Navy Game that has its own December stage as the final college football regular season game.

Calhoun said in an October virtual call before the Navy game he agreed. He reiterated the idea on Tuesday when he met with the media through a virtual call as Air Force (3-2) meets Army (8-2) 3 p.m. ET Saturday at West Point.

A C-i-C game has never been played after the Army-Navy Game, but since Air Force and Army have both defeated Navy – Air Force won 40-7 in October and Army won last week 15-0 in the 121st Army-Navy Game — that raises the unprecedented circumstance of playing for the Trophy.

“In a lot of ways, hopefully we won’t do this way again, playing at this time,” Calhoun said. “But I’ll tell you what is neat, down the horizon maybe there are other ways to share this game nationally, too.”

Calhoun suggested rotating at neutral sites some years while still maintaining the traditional home-and-home other seasons.

The Air Force-Navy or Air Force-Army games could be played for 100 years and they’ll never rival the drama and pageantry of the Army-Navy Game. But what a national audience needs to appreciate with a bookend game is both the Navy and Army players says the competition and hitting against Air Force is just as intense.

The academies are represented by players that have volunteered for a five-year military commitment during an endless war on terrorism.

“There is a way to balance it,” Calhoun said. “Primarily, you want to play this game where it’s home and home. But once in a while if you did it two years somewhere each squad played in Chicago, DFW (Dallas-Fort Worth), Houston, Atlanta –some where the they may be so somewhat centrally located – that would be a neat deal.

“You think of the number of graduates we have in those four areas I named and even more so the number of service members that are within five hours or so.”

Army coach Jeff Monken also commented on the rivalry and the unique date at his Tuesday session with the media.

Air Force-Army won’t have the stage to themselves with conference championship games and final postponed conferences games taking place, but there is more focus than their usual mid-season meetings.

“It’s a source of pride for everybody that plays for it,” Monken said. “I’m certain of that. All three schools that play for it covet that trophy. It’s the most important goal that we have as a program and I’m sure that is shared by our counterparts. It’s a big game and we’re excited for this opportunity to play.

“We didn’t know that as the season went along if we were going to have a chance to do that. We’re fortunate to be here and excited that we’ll have an opportunity to compete for it.”

The Air Force Academy wasn’t established until 1954, and the Falcons’ first football season wasn’t until 1957. West Point and Annapolis, of course, have a much longer history dating. Army and Navy first played football in 1890.

Air Force’s first game against Army was in 1959 and Navy in 1960. The Falcons played one of the two in alternate years. The Commander-in-Chief’s Trophy was established in 1972, with Army sweeping Air Force and Navy to claim the first one presented by President Richard M. Nixon.

Since Air Force’s season opener was against Navy, both of the Falcons’ C-i-C games have been unique. Air Force, as a Mountain West Conference member, had all but its Navy and Army games postponed to the spring. The MWC, similar to the Big Ten, announced it August it would play a spring season due to the pandemic before reversing its decision.

The Falcons, despite the late satart, were ready for Navy, beating the Midshipmen 40-7 at Falcon Stadium. Junior starting free safety Corvan Taylor intercepted a pass at the Falcons’ 13-yard line and returned it 62 to set up Air Force’s final points, a touchdown late in the fourth quarter.

Air Force starting junior free safety Corvan Taylor said the C-i-C is the goal every year, but this year’s circumstances have everyone’s attention this time of year. Now comes the bookend C-i-C game – for Air Force – on Saturday.

“It (excitement) is at an all-time high,” said Taylor, a 6-foot-2, 205-pounder from Gilbert, Arizona. “We’re super excited, especially with school over. We’re able to focus on beating Army.”

Calhoun knew more than the let on in the Dec. 15 virtual call. A day later the Lockheed Martin Commander’s Classic was announced. Army and Air Force have scheduled a two-year series at Global Life Field, the new home of baseball’s Texas Rangers in Arlington, Texas.

Air Force is the home team for the Nov. 6, 2021 game as it would be if the normal home-and-home rotation took place in Colorado Springs. Army will serve as the home team Nov. 5, 2022 at Globe Life Field.

“We are honored to have Air Force and Army play the inaugural football game at Globe Life Field,” said Texas Rangers Executive Vice President of Sports & Entertainment Sean Decker. “Honoring our military heroes is very important to the Texas Rangers, and we expect the environment and other activities surrounding this great matchup will make for a very exciting weekend in Arlington.

“I want to thank Lockheed Martin for its title sponsorship of the Commanders’ Classic. Lockheed Martin embodies our nation’s commitment to our Armed Forces, and it is the ideal relationship for this storied matchup. I also want to recognize the efforts of our partner LST Marketing for its assistance in making this event a reality.

Lockheed Martin also sponsors the Armed Forces Bowl at Amon G. Carter Stadium in Fort Worth on the TCU campus.

Ol’ Roy is bringing Maui to the North Carolina mountains