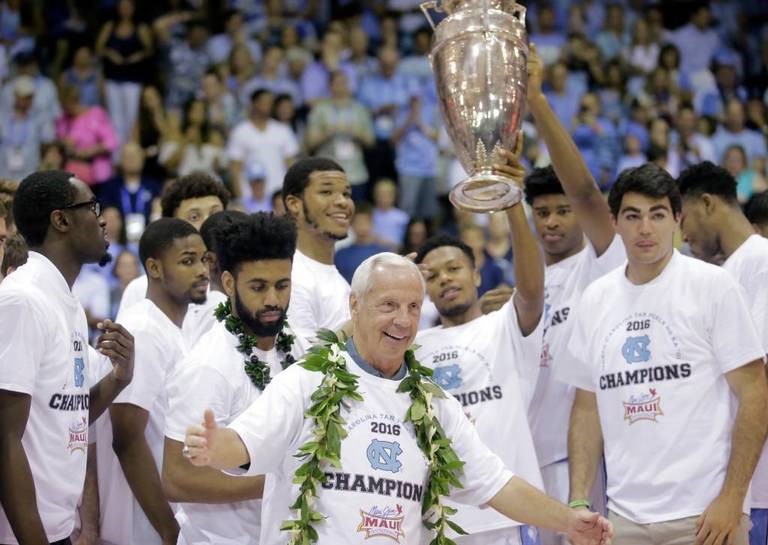 Roy Williams is taking North Carolina on another trip to Maui, but the Tar Heels are riding a bus to Asheville in western North Carolina’s mountains rather than boarding a plane for paradise in the middle of the Pacific Ocean.

But you won’t be able to tell the Camping World Maui Invitational court’s location by the coaching shots on the bench. Williams plans to wear a Hawaiian shirt, a Maui custom at the Lahaina Civic Center, for at least one of the three games played at Harrah’s Cherokee Center.

“That’s the most important question I’ve heard today,” Williams said during a Sunday virtual interview. “I’ll probably wear a coaching shirt and at least one Hawaiian shirt as well. It makes me think of those good times we’ve had in Hawaii.”

Williams’ North Carolina teams have won three of four Maui trips with a 13-1 record (he’s also 5-1 at Kansas with one title in two trips to Maui).

The No. 16-ranked Tar Heels (1-0) open the eight-team, three-game Maui Invitational at 7 p.m. on Monday against UNLV (0-1). They’ll face either Alabama or Stanford, depending on the results, the second day before Wednesday’s third and final day. On the other side of the bracket are Davidson, Indiana, Providence and Texas.

College football has been more unpredictable than usual with the COVID-19 pandemic altering preparations – both physical and mental. Some teams have handled it better than others. One difference was football opened with conference schedules, meaning Power 5 vs. Power 5.

But even though college basketball teams have opened their seasons against mid-majors, there still have some been some early upsets and near-upsets. Fourth-ranked Virginia lost to unranked San Francisco, 61-60; No. 22 UCLA fell to unranked San Diego State, 73-58; and No. 8 Illinois escaped Ohio, 77-75.

“They’ve been sitting around not going to class. They’re doing online classes in the gym, they practice in the gym, they lift weights down there they never see the other students. It’s nowhere near what a typical freshman year is like. It’s something we as coaches have been concerned about very year.”

Brooks only scored six points, but he pulled down 11 rebounds. Bacot finished with 12 points and eight rebounds.

“He’s got to get playing the game without fouling,” Williams said. “I’d like for him to play more in certain games. I know he’s going to be sitting with me because the officials called what are silly fouls on him. His first foul was completely unnecessary. In the post area you’re going to have fouls, but you can’t have a foul 35 feet from feet basket for bumping somebody. We got to get him away from those things. He has a tremendous ability to rebound the ball and dominate inside.”

The games in Asheville are a homecoming for Williams. He played at T.C. Anderson High and had his first coaching job in Asheville at Owen High.