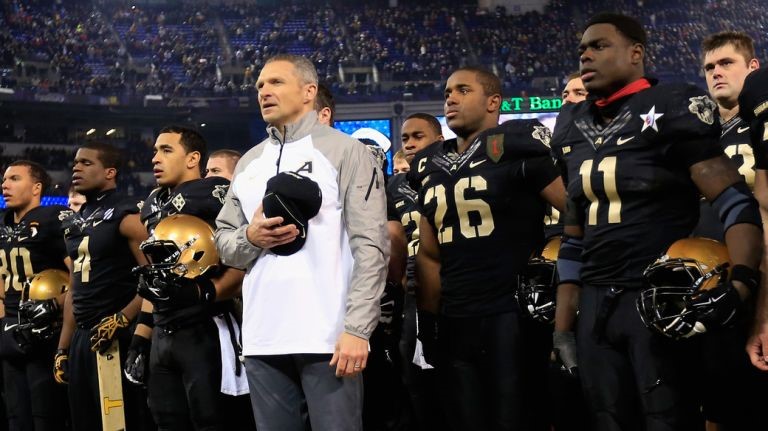 PHOTO: Army coach Jeff Monken with his Black Knights during the singing of the alma mater.

This year’s Army-Air Force game might end up with a singular stage it deserves similar to the historic Army-Navy Game reserved for the final Saturday of the regular season, but Army coach Jeff Monken doesn’t like how the circumstances are playing out.

The Air Force-Army game that was scheduled for last Saturday at West Point was postponed when Air Force announced a COVID-19 outbreak and was unable to travel. Monken was upset last week Air Force waited until Thursday to inform Army it couldn’t play .

He was still frustrated Tuesday during his weekly media session as the Black Knights (6-1) prepared to play Saturday at Tulane. He believes Air Force should have informed Army sooner so the school could have found a substitute opponent or relied on rosters bigger than most college teams to play the game.

The postponement interrupts the Commander-in-Chief’s Trophy rivalry. Air Force had already defeated Navy in October and can clinch the Trophy and the accompanying trip to the White House with a victory. If Army wins, the Black Knights try to clinch the Trophy against Navy on Dec. 12 at West Point. The Army-Navy Game was moved from Philadelphia due to the COVID-19 pandemic.

“We’ve got a huge roster and so do they,” Monken said. “This game is for the Commander-in-Chief’s Trophy. It’s to have a trip to the White House. It’s a source of pride for the academies, for the respective branches.  If you can’t play, I get it, but at least share the information that’s protocol, that’s required, so we know what’s going on.’’

The three academies play a round-robin series with the winner invited to the White House. The playing groups are athletes the coaches recruited, but many others on the teams are essentially “walk-ons” that want to be part of the program. Unlike walk-ons at civilian colleges, all of the Army and Air Force Cadets and the Navy Midshipmen are on scholarship as their training to become future officers.

Monken says Army has about 160. He added Air Force has about 230 based on information each school must supply regarding COVID-19 testing.

“Frankly, I think there’s intent to deceive in a lot of areas coming out of that camp at times,’’ he said. “The things that they say to our prospects, the inaccuracies about the Army. If we’re going to be about the military, then let’s be about the military, and not tell a young man that he’s making a poor decision because he wants to serve his country in one way different than another.”

Monken added his frustration with Air Force dates to his days as a Navy assistant coach. He believes Air Forces uses negative recruiting.

“I’m upset in general with them pretty much 365 days a year. It’s not just this. It’s multiple things and it’s not unique to me. I coached at the Naval Academy and same stuff was happening when I was an assistant there. So it’s nothing new. Over years and years of having to deal with the same stuff, sometimes just enough is enough.’’

The only Saturday both schools have available the rest of December is Dec. 19, but that’s an academic conflict with finals. Army already has secured a berth in the Independence Bowl on Dec. 26 in Shreveport.

I’ve written in the past that Air Force’s games against Army and Navy deserve more attention than they receive while lost in the middle of full slate of Saturday games.  Perhaps the opening weekend the season reserved for Air Force playing Army and Navy in alternate years provides an attractive date.

What better way to recognize the Army, Navy and Air Force men and women for volunteering to serve their countries during an endless war on terrorism?

If Army defeats Navy, Air Force-Army will have more attention than it has gained in the past. But when can it be played?

“Oh, I think there’s a lot of things that could be worked out,’’ Monken said. “We can do it next Wednesday as far as I’m concerned. We want to play the game.’’

Johnson’s DB teammates showing him path to the NFL