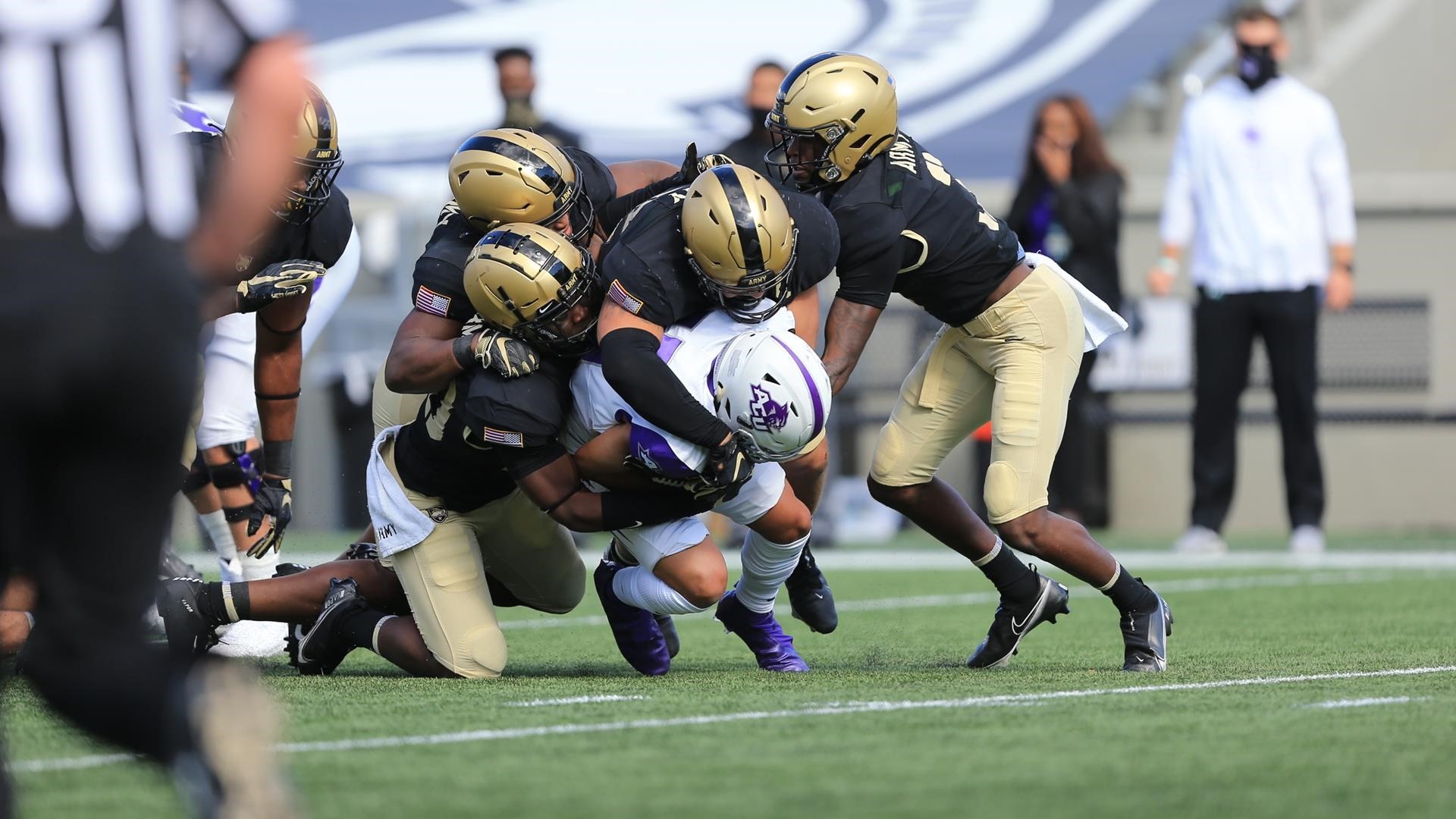 Army football annals overflow with overachieving seniors that played backup and special teams roles until they seized their opportunity as a first-year starter. Jon Rhattigan is this year’s example.

The senior linebacker that entered 2020 with six career tackles leads the Black Knights through four game with 28, 11 unassisted. His four tackles for a loss have totaled 20 yards; included are 1.5 sacks for 14 yards.

“I’m really excited for Jon and happy with the way he’s playing,” Army head coach Jeff Monken said. “He’s making a lot of plays, a lot of tackles. He’s very physical. He’s been a tremendous special teams guy for us in years past.

“He was able to make his way into the starting role after playing behind Cole Christiansen and Arik Smith the last couple of years. He’s a first-time starter as a senior. I think he’s really taking advantage of the opportunity and playing really, really hard and really well.”

Rhattigan makes his fifth start after not making the two-deep depth chart the past three years as the Black Knights (3-1) play host to The Citadel (0-3), a Football Championship Subdivision member, at 1:30 p.m. Saturday at Michie Stadium.

The 6-foot-1, 245-pounder from Naperville (Ill.) Neuqua Valley knows he’s one in a long line of senior first-year starters. And he says he won’t be the last.

“It’s something that is instilled in you in this program, just being tough,” Rhattigan said. “I’ve had a great bunch of linebackers in front of me. I have worked hard for three years. I’ve done my best to learn from the guys in front and stay ready when my times comes. Thankfully I have.

“It’s just humility and giving a constant effort. Even though I was not a starting guy, I think a lot of guys buy into that in our program. It might be a surprise to people what I’ve done this year, but there will be more guys that do it in the future.”

The academies don’t redshirt football players, so when Rhattigan’s academics gained direct admission, he didn’t have that added year to develop physically that Cadets gained at the Army prep school.

As a freshman in 2017, he was limited to the scout team. In 2018, he didn’t see the field until the rout of Houston in the Armed Forces Bowl. He wasn’t on two-deep depth chart as a junior year while limited to special teams.

The clock was ticking on his eligibility, but that didn’t frustrate him.

“You’ve got to have humility – that’s something we value heavily in this program,” Rhattigan said. “I was going to do my role and do it to the best of my ability. If that was on special teams I could make an impact, then I was going to do it 100 percent. I go as hard as I can to help my team win. I took my role and did the best I could. I’m doing the same thing this year with a new defensive coordinator (Nate Woody) and new assistants (inside linebackers coach Will Shiel). I wanted to show them I was a special teams guy, but I was also a skilled linebacker. You find your role and you go 100 percent.”

The COVID-19 shutdown sent the Cadets home without spring football, but Rhattigan stepped up his individual workouts. He emphasized improving his quickness with change-of-direction drills and adding strength.

“That was something Cole had done with success as a  linebacker,” Rhattigan said. “He was strong and quick.”

Coming out of high school, Rhattigan had recruiting interest from Mid-American Conference member Ball State and Ivy League schools. But when Army pursued him, he saw an Ivy League education at a school playing a Football Bowl Subdivision schedule.

“Once I took my official visit and met the guys, I was sold,” Rhattigan said. “I committed the next week.”

He’s not from a military family, but both his grandfathers, Thomas Rhattigan and Dick Tallman, were in the Army long before the era of the all-volunteer military established in the 1970s. He remembered seeing their uniforms and them telling him about their experiences.

“It’s great to serve our country,” he said. “Both my grandparents said that’s how they developed themselves; the foundation of who they were came from their life in the military. It’s a great opportunity to develop myself and become the best leader possible.”