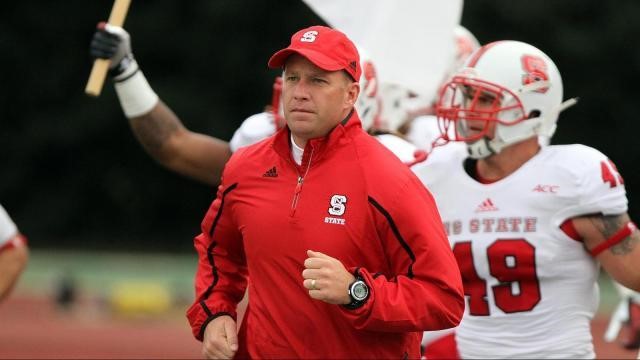 Sometimes the natural order of the universe resets man’s altered plans. That even applies to college football schedules in a modern world turned upside down by the COVID-19 pandemic.

N.C. State and Duke are meeting for the 83rd time but only the second game in N.C. State head coach Dave Doeren’s eight Raleigh seasons. And it’s the first time Doeren has hosted the Blue Devils at Carter-Finley Stadium.

“You go into every grocery store and you see N.C. State, Duke and UNC,” Doeren said. “You see it everywhere yet you don’t play them. To me it’s natural rivalry game — it makes sense geographically to play a team that close to you and in your own league. It’s a common sense.”

No one ever accused august college football leaders of overdoing common sense. The ACC’s expansion — 12 teams in 2005, 14 in 2013 and Notre Dame as a partial member — resulted in two divisions.

With N.C. State and Wake Forest in the Atlantic and Duke and North Carolina in the Coastal, the time-honored series among the four charter ACC members was cast aside.

This year’s pairing was a result of tearing up 2020 schedules. Notre Dame was included in a 15-team conference without divisions. Regions were taken into account; all four Tobacco state schools face each other.

Instead of eight ACC games, there are 10 conference opponents. The added conference games and regional priorities resulted in the Duke-N.C. State playing for first time since 2013 and first time in Carter-Finley since 2009.

Duke won both those games under 13th-year head coach David Cutcliffe. He’d also like to see the Blue Devils and Wolfpack play annually, but he’s not optimistic the conference will take geography into account anytime soon.

“Yeah, I think that’s a great thing,” he said. “But at the same time, it’s not really something that you can do from an ACC standpoint when you have 14 teams and two divisions. They’re not going to let us. We have Wake every year. We have North Carolina, which is in our division.

“I don’t think they’re going to let us both not have a travel opportunity. The rest of the league would probably throw their hands up on that one. I said this earlier today talking with someone, with the midst of what we’re in, we have no idea what next year is going to look like. We may be playing nine or 10 conference games every year. That may be what TV wants to see. So, in that environment, it would likely have a better chance of happening.”

With the season now more than a month old, Duke and N.C. State both experienced a turnaround following a loss to Virginia Tech.

Duke and N.C. State ranked about even in total defense in the middle of the conference. The Blue Devils are eighth at 416.6 yards per game, the Wolfpack 10th at 447. But Duke’s trouble with turnovers has limited the offense to only 21.6 in points (14th) compared to N.C. State’s 34.2 (seventh).