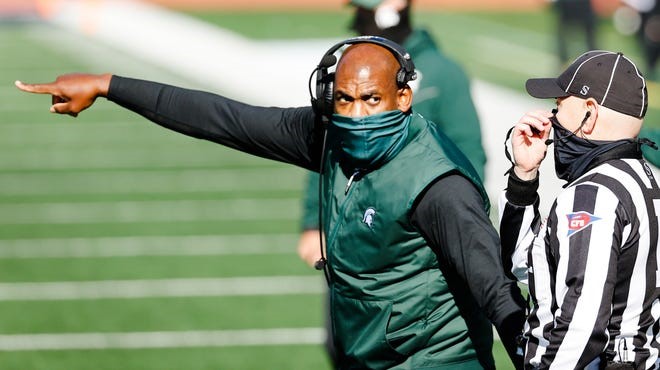 Mel Tucker conjured up a little Nick Saban magic, matching his mentor with a win in their first game against Michigan. And, like Saban, Tucker’s multi-sport quarterback was a gamer.

Rocky Lombardi, a champion high school wrestler, dug down with some wrestler tenacity — real wrestling, not the fake stuff on TV that dopes pay to watch.

The 6-foot-4, 225-pounder plowed two yards on a fourth-and-2 sneak. The first down allowed the Michigan State to run out the final seconds without taking another snap.

In 1995, Tony Banks, who played in the Minnesota Twins’ minor league organization before he returned to football, completed a fourth-down sideline pass for a first down to keep alive a game-winning 88-yard touchdown drive.

For all those that shot from the hip last week: Here’s the address to send your apologies: Mel Tucker, head coach, Michigan conqueror, Duffy Daugherty Building, 771 Chestnut Road, East Lansing, 48224.

A low-point in Michigan State football history was the over-the-top criticism of Tucker following the Spartans’ season-opening loss last week at home to Rutgers.

Dismaying, yes. The end of the season, ridiculous. But, sadly, in this American age of Trump divisive rallies, the racial overtones offered with comparisons to Bobby Williams, Michigan State’s African-American coach that was fired in 2002, were shameful.

They were embarrassing for any school, but even more so for a program College Football Hall of Fame coach Duffy Daugherty guided. He led college football integration with players on his 1960s Underground Railroad teams opportunities for Black assistant coaches, hiring Sherman Lewis in 1969 and Jimmy Raye in 1972.

Even if Michigan State had not won the game, Tucker showed he is firmly in charge of the program. A coach with less respect from his players wouldn’t have been able to rally his troops with such a complete effort. Michigan State’s performance was more than mustering in-game rivalry spirit.

The Spartans improved from coughing the ball seven times a week ago to a clean game – no fumbles, no interceptions.

The game plan exploited Michigan’s weakness against the deep ball. Lombardi was 17-of-32 for 323 yards with three touchdowns and no picks. There were long balls of 53 yards to Jalen Nailor and 50 to Ricky White.

Tucker had the right people on the field, regardless of class. White, a true freshman wide receiver from Marietta, Georgia, scored the first touchdown on a 30-yard grab in the end zone. He caught eight balls for 196 yards and a touchdown.

The running game remains far from reliable, but there was improvement with key gains despite only a 3.3 per carry average (38 for 126).

The fair question about this team after the Rutgers debacle was it’s talent level. Not its head coach or its direction he has established under trying circumstances.

Kids imitate what they see TV. That was repeated once again when Michigan State redshirt cornerback Shakur Brown was flagged for a stupid taunting penalty.

He made a strong tackle, fundamentally and physically, while wrapping up and putting down the ball carrier on his back. The second-and-10 screen pass was for no gain. Instead of preparing for third-and-10 with Michigan out of field goal range, he stood over his fallen opponent like a TV wrestler posturing. The referees correctly threw a flag, walking off 15 yards for a Wolverines’ first down at the Spartans’ 26.

But after the flag, the first person emphatically in Brown’s face was Tucker. There is wondering whether the coach will look the other way if his players are caught imitating what they see on TV – the NFL or fake wrestling.

Stupid unsportsmanlike penalties were always a problem with George Perles-coached teams. Perles admitted in his biography that he would tell the offending player while the camera was on them he had to act like he was scolding him, but he actually was telling the guilty party he liked his aggressiveness.

He had left the program a year ago after he fallen down the depth chart. He announced he was entering the NCAA transfer portal, but he never completed the move. He admitted he looked in the mirror after he accepted criticism from his family when they questioned his discipline and commitment.

Tucker, in one of his first acts since he was hired in February, granted Heyward’s wish to return to the program.

The 6-0, 23-pounder, a son of the late Craig “Ironhead” Heyward, an 11-year NFL veteran, scored two touchdowns on a 2-yard pass and a 13-yard screen. On the latter he picked his way through defenders between the right hashmarks and sideline to find the end zone.

The play finished an 18-play, 92-yard drive for a two-score lead (27-17) with 5:11 left in the game. It also overcame a hole when a clipping penalty pushed the Spartans back to a first-and-goal from the 18-yard line. Heyward gained five yards on fist down and the TD reception on second down.

But that’s not all.

When Michigan scored to trim the deficit to a long field goal with 37 seconds remaining, Heyward was on the “hands team.” He smothered the bouncing onside kick attempt. As the ball came his way, he quickly pulled it tight to his stomach before it could take an awkward bounce away from him.

Oct. 24, My MSUings on Rutgers loss

If they had the Internet when I was a college kid writing with a “State News” typewriter on the third floor of the Student Services Building, my MSUings notes would have been #MSUings.