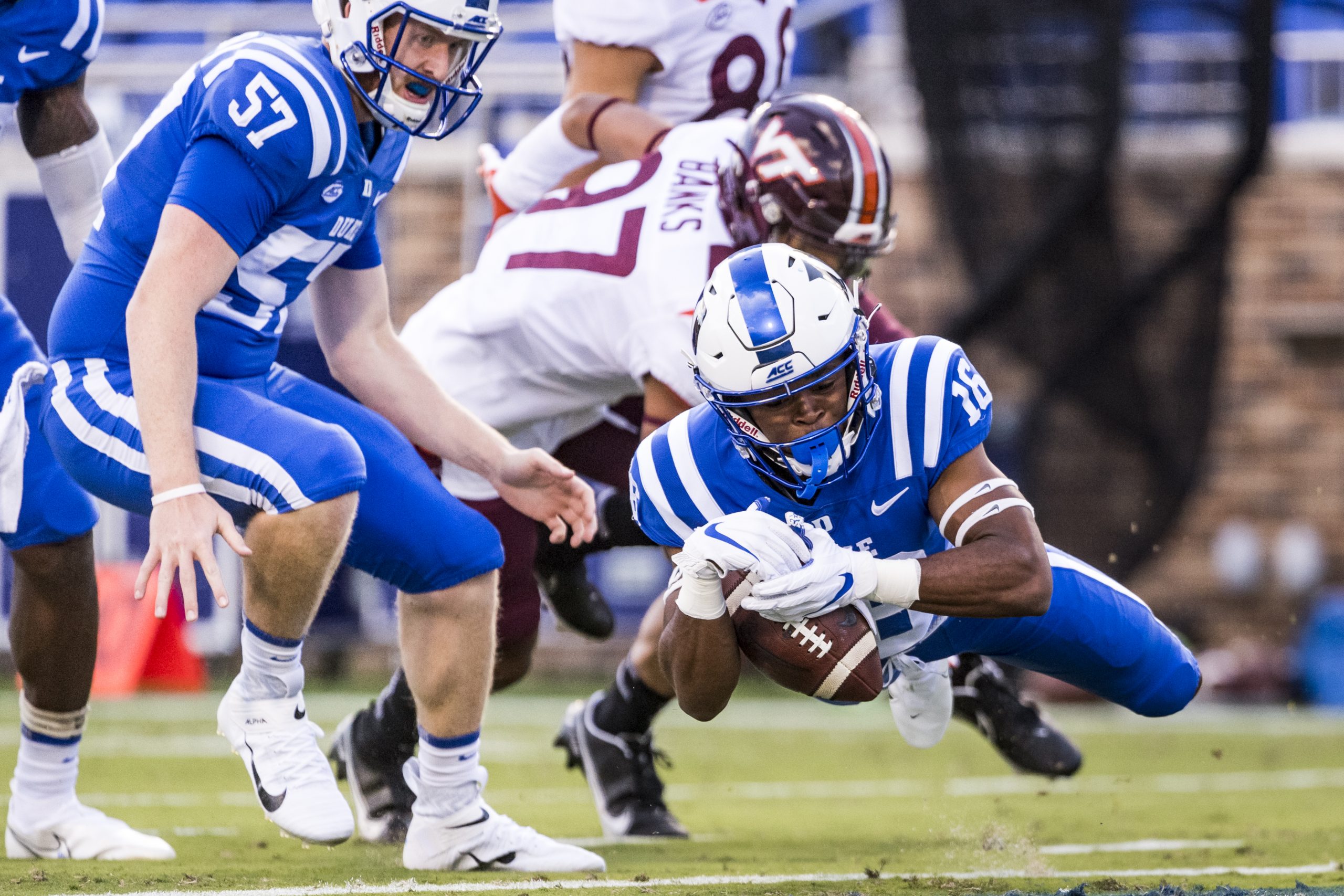 Duke Football takes on the Virginia Tech Hokies at the Brooks Field at Wallace Wade Stadium on October 3, 2020 at Durham, North Carolina.

The oblong ball seems to bounce a team’s way in a winning football season. In a frustrating losing season with wins left on the field, it bounces away.

Duke’s struggling football team appeared to finally have the ball bounce its way in the first four minutes of Saturday’s ACC home game against Virginia Tech. On the Blue Devils’ first punt, Virginia Tech punt returner Tayvion Robinson fumbled the descending ball and turned backward as it skipped away from him.

A group of players fell to the ground in the scramble, include Duke’s Jaylen Stinson at the 20-yard line. But the ball kept eluding everyone’s grasp as it bounced toward the goal line. Stinson jumped to his feet and ran for the ball on an arc to get around the pileup.

The angle gave him a perfect launch point to scoop the elusive prize like a baseball Gold Glove shortstop running behind second base. Stinson controlled the ball as he crossed the goal line and fell to the turf fully extended for Duke’s sudden 7-0 lead.

“We have a term for that — treat the ground like a hot stove. As soon as you hit the ground, get up and you go make something happen.”

“Just a great effort,” Duke head coach David Cutcliffe said Monday on a Zoom call. “A mentality that is not going to be denied. We have a term for that — treat the ground like a hot stove. As soon as you hit the ground, get up and you go make something happen. Our team has had intermittent great moments of spirit.”

Alas, intermittent wasn’t enough as the Blue Devils fell to 0-4, losing 38-31 to the Hokies.

The mishandled punt off the foot of redshirt freshman Porter Wilson was a high and came down 43-yards from the line of scrimmage. The coverage team was on the ball as it came loose. Wilson is averaging 43.6 yards per punt with nine of 23 inside the 20-yard line and eight fair catches.

“Our punt team is performing at an extremely high level,” Cutcliffe said. “I’m not talking about just the snapper and punter (senior John Taylor). I’m talking about everybody involved with the punt team.”

Stinson had originally committed to Purdue until he flipped to the Blue Devils. He was a consensus three-star recruit. In addition to a three-time all-area selection, he was a 2019 state champion in the javelin.

“Jaylen is an exciting young player,” Cutcliffe said. “He’s full of energy. Our freshmen are leading the way in so many ways. I’m excited about that. We’ve got to put 22 people out there – really the 33 with whatever specials teams unit – that are playing with that energy. I’m anxious to see if we can get to that level and get that level of execution. Great play by him.”