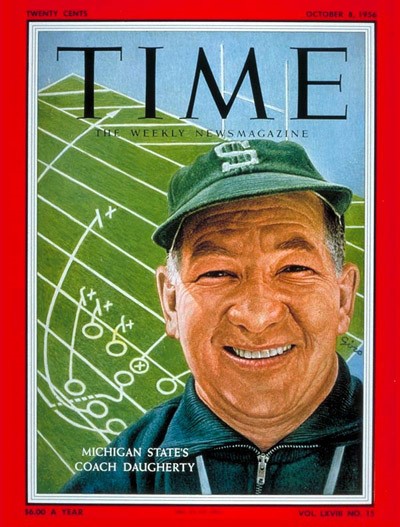 President Barack Obama three years ago you presented North Carolina basketball coach Dean Smith with the Presidential Medal of Freedom. The White House ceremony was a moment for the basketball nation to applaud.

That resume and time frame is matched, if not surpassed, by another trailblazing coach from his time at Michigan State. However, Duffy Daugherty, the Spartans’ College Football Hall of Fame coach from 1954 to 1972, predated ESPN and cable TV that benefitted Smith’s legacy growing beyond the confines of Tobacco Road.

Daugherty won back-to-back national titles in 1965 and 1966, multiple national coach-of-the-year awards and, most significantly, no major college coach did more to lead the integration of college football in the Civil Rights era. He changed the face of college football, his teams influenced other schools and sports. His teams helped open doors for Charlie Scott and other black athletes in the South.

Daugherty’s significance remains relevant. There is still progress to be made to bridge America’s racial gulfs, but his career reminds us “how far we’ve come against impossible odds.” Those were your words in July in a similar context at the Dallas police memorial.

Michigan State’s national championship rosters had unheard of numbers of 20 black players and 11 black starters. They were Daugherty’s Underground Railroad teams fueled by black high school coaches in the segregated South. They trusted him and sent him players such as College Football Hall of Famers Bubba Smith of Beaumont, Tx., George Webster of Anderson, S.C., and Gene Washington of La Porte, Tx.

Daugherty was a national figure on Smith’s level. In 1956, Daugherty was on the cover of “Time.” In those days, Time publisher Henry Luce considered a “Time” cover a coveted honor in American culture.

Neither man sought attention for their trailblazing. They did it because it was the right thing to do, even though they met push back from those opposed to integration or the growing pace of it. As Martin Luther King said when he spoke at Michigan State in 1965, “Time is neutral, and the time is always right to do right.

One difference, though, was Daugherty’s time preceded the era of cable TV that overlapped Smith’s career. Another is Smith’s story of one coach and one player easily wraps with a bow atop to pass on. Daugherty’s story has more folds to package. It doesn’t pass on as easily.

Nevertheless, the example of Daugherty’s teams both cracked open doors for black athletes in the segregated South and pushed opener wider doors at schools with a long history of integration yet only a handful of black athletes.

— In 1960, national champion Minnesota had only five black players.

— In 1966, national champion Notre Dame had only one black player, Alan Page. The Spartans lined up 20 black players against the Irish in the 1966 Game of the Century that ended in a 10-10 tie.

— In 1973, Notre Dame won its next national title with 13 black players. Notre Dame historically recruited the South and thus limited its recruitment of black athletes, but Notre Dame coach Ara Parseghian, hired in 1964, dismissed that practice.

Daugherty’s Underground Railroad teams, with the help of southern black high school coaches laying the tracks by sending him players, had shown the way to the Trojans, the Irish and the rest of the nation.

Kentucky was the first Southeastern Conference school to recruit Black football players in 1967. Alabama waited until 1971 to play two black payers on its roster. Georgia, LSU and Mississippi were the last holdouts in 1972. Georgia had three black players and LSU and Mississippi one each.

Those were baby steps compared to Daugherty. Among the black and white recruits in Daugherty’s final 1972 recruiting class, there were six black players from the South, including future coaching pioneer Tyrone Willingham of Jacksonville, N.C. That total outnumbered entire SEC rosters.

Daugherty broke barriers in many ways.

Michigan State’s 1966 quarterback was Jimmy Raye of Fayetteville, N.C. He was the South’s first black quarterback to win a national title. The Spartans were co-national champions with Notre Dame as named by the National Football Foundation’s MacArthur Bowl.

His team captains were Webster and Clinton Jones, a pair of two-time All-Americans. They were the first two black team captains in college football as voted by teammates, without a white player sharing the role.

Daugherty’s impact is still felt. At the 2015 College Football Hall of Fame enshrinement, Jones of Cleveland, Ohio, joined Webster, Smith and Washington in the Hall. They are the first four black seniors from the same class named to the College Football Hall of Fame. Only three other schools have recorded such a grand slam with four players from the same class; the most recent until the Spartans was Boston College in 1940.

Sports stories from the Civil Rights era depicted in film primarily tell the story of racism and the abuse pioneering athletes endured, particularly in the South. They deserve to be told to educate the public, but such stories can overshadow the progress at other places. Michigan State’s Underground Railroad was a story of how integration should play out in a just society.

Jones, the first African-American voted Mr. MSU in the spring of 1965, described Michigan State’s campus as an “oasis” from “things boiling over in the country with civil unrest. He said the only slight he felt in four years on a predominantly white campus was when the woman voted Miss MSU, Anne Lawrenz, refused to dance with him as was the tradition at the MSU Ball.

Daugherty is a figure of Dean Smith and Smithsonian significance.

Among the displays featured at the recently opened Smithsonian National Museum of African-American History and Culture in Washington, D.C., are photos and biographical information of Sherman Lewis and Jimmy Raye for their pioneering college and NFL coaching careers as assistants and offensive coordinators. Lewis also was Daugherty’s first All-American on his Underground Railroad. The halfback from Louisville, Ky., finished third in the 1963 Heisman Trophy voting.

Daugherty’s career was in collaboration with Michigan State president John Hannah, the first chairman of the Civil Rights Commission. Hannah brought Ernest Green of the Little Rock Nine to Michigan State on a scholarship. Green described Michigan State as “a launching pad” for black students.

This year marked the 50th anniversary of the 1966 Game of the Century matching Michigan State and Notre Dame. Memories have brought Daugherty’s name to life again, but his ground-breaking career is fading unfairly into history without proper recognition.

Presenting Daugherty with the Medal of Freedom can right this oversight. As David Maraniss, a Pulitzer Prize winning journalist and biographer, has noted, “History writes people out of the story. It’s our job write them back in.”

In 1963, President Kennedy reintroduced the Medal of Freedom as the nation’s highest civilian honor. Kennedy was a football fan and the right President at the right time for the Civil Rights movement to take root under Martin Luther King.

Duffy Daugherty was more than a successful football coach. His teams represented the America that MLK envisioned and his career the ideals that JFK expected in a Medal of Freedom recipient.