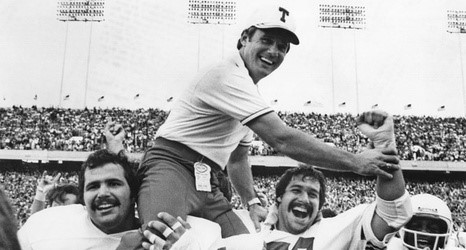 Some of the highest praise in the coaching profession for Jimmy Raye is offered by former Texas coach Fred Akers, an unlikely source considering their backgrounds.

They grew up on opposite sides of segregation as athletes and later as young coaches, but their paths did cross in 1976. Akers was Wyoming’s head coach and Raye served in an offensive coordinator role. The 1976 Cowboys shared the Western Athletic Conference title with BYU.

“I’ll tell you right now, Jimmy Raye would have been a great head coach,” Akers said. “He was dedicated, and he told it like it is. He was a coach who could lead and inspire young men. He was a perfectionist who left nothing undone. You can’t find a better coach than Jimmy Raye.”

THE PATHS THAT BROUGHT THEM TO WYOMING’S SNOWY AND LARAMIE AND SNOWY MOUNTAIN RANGES WERE LONG AND TWISTING.

Akers, 76, grew up in segregated Blytheville, Ark., and played college football at all-white University of Arkansas. He began his coaching career at the high school level in the segregated state of Texas. The University of Texas was still segregated when he joined Darrell Royal’s staff in 1966 and remained so until 1970.

Raye, 68, was a victim of Jim Crow laws growing up in Fayetteville, N.C., where he played at all-Black E.E. Smith. He escaped segregation on Michigan State head coach Duffy Daugherty’s famed Underground Railroad. He made history as the first Black quarterback from the South to win a national title in 1966. He spent two seasons playing in the NFL before he launched his coaching career at Michigan State.

How, you might wonder, could two Akers and Raye cross paths? The answer was easy — but only if you understood the ubiquitous Daugherty was a coach with friends everywhere. Akers first met Daugherty at clinics and struck up an instant relationship.

“I talked with Duffy a lot in my career,” Akers said. “Whether he knew it or not, I considered hima mentor. We exchanged a lot of ideas we thought would make our teams better. Duffy always put on a good clinic. It was a strong point for him. He was a unique individual.”

BUT THAT’S ONLY HALF OF THE STORY.

Raye worked for Daugherty in 1971 and 1972. Then Daugherty retired, and Denny Stolz succeeded him; Raye was retained on Stolz’ staff from 1973 to 1975 until Stolz was fired after the 1975 season. Out of work, Raye had his eye on a warm-weather job.

“I told Duffy I was thinking of taking a job at San Jose State,” said Raye, “but he told me, ‘No, you’re not. You’re going to Wyoming.’

“I said, ‘Why would I want to go to Wyoming?’ He told me, ‘Because Fred Akers is the head coach there. Frank Broyles and Darryl Royal will retire soon, and Fred Akers will be the new head coach at Arkansas or Texas in a year or two.’ “

Raye left for Laramie reluctantly. But Duffy, who kept track of his former players until his death in 1987, was proven right again. Sure enough, Royal retired following the 1976 season and Akers succeeded him in 1977.

“Wyoming turned out to be one of my greatest experiences in coaching,” Raye said. “I was concerned about taking my family to a city with only one other Black family, but we really enjoyed Laramie. My wife was involved in civic activities. I used to drop my kids off at school and wondered what I had done to them with my selfish coaching desires sending them to a school where no other students looked like them. But my kids enjoyed the school. They didn’t really want to go to Texas.”

Raye went through Texas’ recruiting season and spring football — he was looking forward to coaching Earl Campbell, who was about to become the 1977 Heisman Trophy winner — before he suddenly found himself with an offer from new San Francisco 49ers head coach Ken Meyer. Raye impressed Meyer when they were both speakers at a spring clinic in San Antonio.

THE TIMING OF THE DEPARTURE WOULD HAVE ANGERED SOME HEAD COACHES, BUT AKERS UNDERSTOOD; HE CONTINUES TO HOLD RAYE IN HIGH-ESTEEM.

One reason was Raye had an immediate recruiting impact. Black high school coaches in the Houston area had been angered by Royal’s comment in 1963 that he could win national titles without Black players. They remained wary of Royal. Texas was one of the final schools in the South to integrate with its first Black player in 1970.

“I’ll bet you people in Houston still remember Jimmy Raye and how he recruited for the University of Texas,” said Akers.

Raye’s recruiting effort in the Houston received an assist from Willie Ray Smith Sr., a famed high school coach at Beaumont Pollard. He was the father of College Football Hall of Famer Bubba Smith, Raye’s teammate and close friend on the Spartans’ 1965 and 1966 national championship teams.

“Jimmy wouldn’t recruit anyone who wasn’t a team player or a standup guy,” Akers said.

Akers, mentioning his wife Diana and Raye’s wife Edwena, added something else Raye shared with other successful coaches was a wife supportive of a career with long hours.

“What an asset she was to Jimmy,” Akers said. “She was just like the support I’ve had from my wife in my career. Edwena was a beautiful lady inside and out.”

In another life-comes-full-circle moment, Raye will be on campus for Michigan State’s homecoming game Saturday against Wyoming. Raye will receive an MSU Distinguished Alumnus Award Saturday night.

The first time Michigan State and Wyoming played was in 1976, when Akers, Raye was on the Cowboys sideline with Akers. Wyoming had the Spartans on the ropes in the first half until quarterback Eddie Smith came off the bench to rally Michigan State to a 21-10 victory.

“Jimmy had a very keen mind,” Akers said. “There wasn’t much he couldn’t do with a football team. And he was a heck of a competitor. I remember him as a player at Michigan State. He was such a competitor he could not help but lead. I consider him one of my all-time friends and associates.”