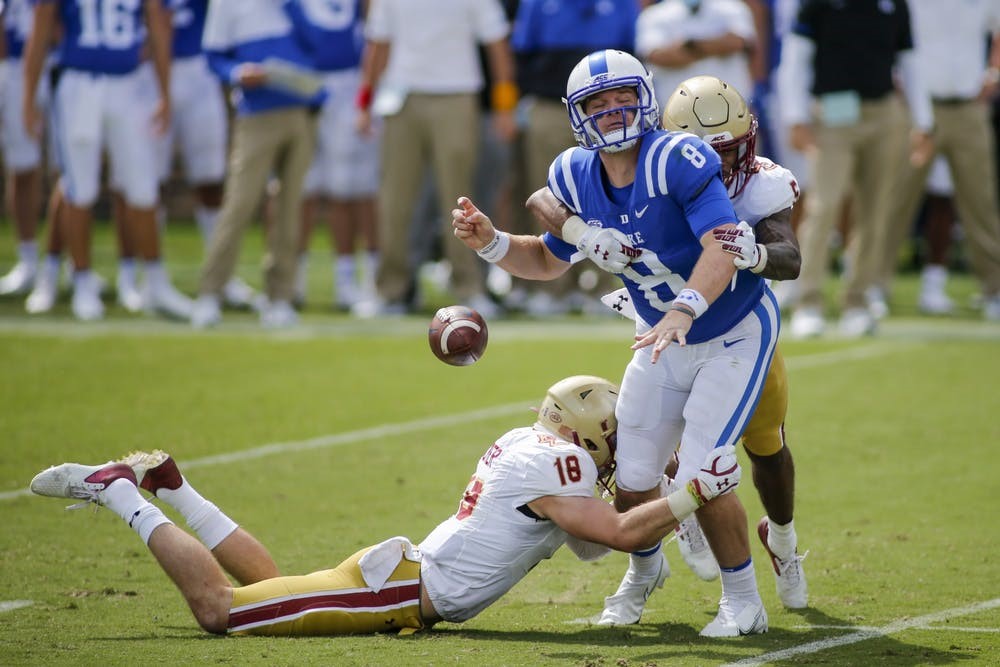 When Duke coach David Cutcliffe retires and writes his book on his football life, he needs to include a chapter for people in their mid-60s with advice on workout and diet routines to maintain energy and work ethic.

Cutcliffe, who turned 66 last week, pointed his finger at himself when explaining how the Blue Devils (0-2, 0-2 ACC) took a step backward with a 26-6 loss to Boston College (1-0, 1-0 ACC) Saturday at Wallace Wade Stadium.

Then he explained the need to add to his check list this week to prepare Duke’s game plan to face Virginia (0-0) on Saturday in Charlottesville.

“I think we have to first of all address myself,” Cutcliffe said. “I really asked my coaches to be very critical to anything they felt and see.”

Cutcliffe took over this season play-calling duties, his forte as the offensive coordinator at Tennessee that led to him becoming a head coach at Ole Miss and Duke. In the promising 27-13 loss at Notre Dame, the Blue Devils consistently moved the ball with 332 total yards.

“You have to get in a rhythm and be comfortable with it,” Cutcliffe said. “I felt good for the most part in South Bend. Today, with some of things we worked on all week, we had to push to the side to respond better. We have to adjust and change on the run better. I’ve got to get better, plain and simple. We can and will. And then we have to take care of the ball.”

Duke finished with 351 total yards, but there were too many three-and-out drives (two to start the game, three overall), turnovers (five, with two fumbles inside the Boston College 5-yard line), penalties (four for 56 yards), a missed 35-yard field goal attempt and an errant PAT wasted scoring opportunities.

The score was 7-6 at halftime until Boston College scored 13 points in the third quarter and 16 unanswered points for the second half.

“No time to punch a panic button, but we’ve got to respond,” Cutcliffe said. “Players expect some sort of response to put our offense back on track. To do things that we believe in – all of us. A belief system is critical in offensive football.”

Boston College played its first game of the season under new coach Jeff Hafley, Ohio State’s defensive coordinator last year. The Eagles were picked sixth in the seven-team ACC Atlantic Division (based on prior to COVID-19 disrupting the season) by Phil Steele Magazine. But Hafley, who had man-to-man talent at Ohio State, threw a zone defense at quarterback Chase Brice and his young receivers. The receivers and Brice weren’t on the same page with patterns and throws.

“They played more zone than we anticipated,” Cutcliffe said. “You don’t have a game to study going into this game. That’s hard on the players. We’ll face the same thing next week. We’ve got to be mentally tougher than that. We’ve got to go in with a great game plan. It’s got to be about duke. It’s not about BC and it’s not about Virginia. We’ve got to trust who we are and what we do.”

Virginia has a veteran coach in Bronco Mendenall – fifth season in Charlottesville, 16th overall – but the Cavaliers are playing their opener. The Virginia-Virginia Tech game scheduled for last week was postponed to Dec. 12 due to COVID-19 infections at Virginia Tech.

“We’re two games in, it’s 2020, there’s 10 conference games,” Cutcliffe said. “Nobody’s going to run from the hard work. We have to stay together in the toughest of times.”