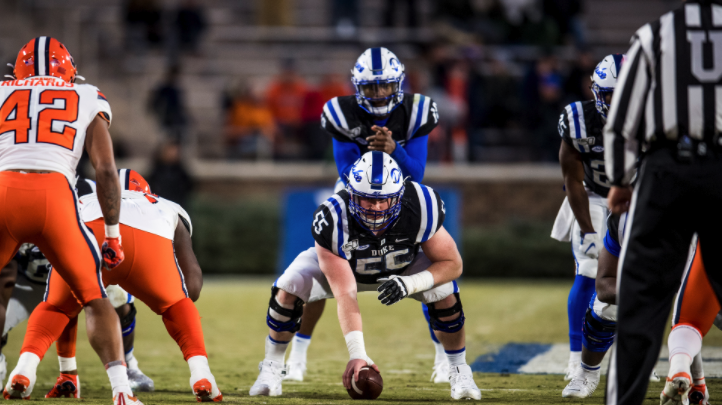 Chase Brice knows the look and presence of a ranked team’s offensive line. He played behind one the last two years as a Clemson backup on a 2018 national championship team and 2019 national runner-up.

He’s aware Duke lacked such physicality to matchup in the trenches a year ago in losses to ranked foes Alabama in the opener 42-3 and Notre Dame 38-7 in the ninth week. Improving the O-line has been a Blue Devils head coach David Cutcliffe point of emphasis.

Brice, making his first Duke start as a grad transfer, can benefit or find himself on the run in the 2020 season opener against No. 10-ranked Notre Dame at 2:30 p.m. Saturday in South Bend, Indiana.

It depends on how much improvement Duke demonstrates with a reshuffled lineup and a new offensive line coach, Greg Frey, who has previously coached at Florida State and Michigan.

“I think coach coach Frey has done a tremendous job getting the guys ready with things he’s done in the past that he can also add onto our offense with what Coach Cut likes to do,” Brice said Wednesday in a Zoom call. “The guys are physical and they’re playing fast and their communicating well. They’re not playing hesitant. That is something Frey has tried to instill in them.

Duke’s starting five linemen are a mix of returning starters, a graduate transfer with starting experience and a backup with one career start that won the nod in competition with more depth than the Blue Devils have had in the past.

At center, redshirt junior Will Taylor (6-3, 305) starts in place of redshirt senior Jack Wohlabaugh, who suffered a season-ending knee injury. Taylor started three games a year ago when Wohlabaugh’s ankle injury ended his season. At left guard, Maurice McIntrye (6-2, 330), who played in 12 games and started one a year ago, earned the starting job. Rakavius Chambers (6-4, 335), a starting right guard last year, is listed as a backup to Monk.

Taylor’s move from backup to starter is actually a reunion for him and his twin brother John (6-2, 210), the long-snapper, with Brice. They were not only teammates at Grayson High in Georgia, their friendships date to T-ball youth leagues.

“When they committed out of high school, I was super excited for them,” Brice said. “Duke was one of my picks before I committed (to Clemson). When I thought about transferring, I texted them first to see their thoughts and how they enjoyed Duke and get their insights. When I came on my visit, I stayed with them and got to hang out with the other O-line guys and their friends. We rekindled our friendship. I hate that Jack is out, but it’s the next man up mentality. Will has worked hard. He has done a tremendous job.”

Although this is Brice’s first start since high school, the snaps he’s taken aren’t limited to mop-up duty. He led a 10-point, fourth-quarter comeback to beat Syracuse in 2018 when starter Trevor Lawrence was knocked out of the game in the second quarter. Brice led a game-winning 13-play, 94-yard drive for the winning TD, 27-23. He was 7-of-13 for 83 yards. The win preserved an unbeaten record on the way to a 15-0 season and national title.

In 25 games over two seasons, he was 82-of-136 (60 percent) for 1,023 yards and nine touchdowns with four interceptions. Brice also has experience against Notre Dame in the 2018 CFP semifinals with mop-up duty in a 30-3 victory.

Notre Dame coach Brian Kelly has a good feel for what he’s facing at center if not for the O-line. Brice was a 4-star recruit.

“Chase was instrumental Clemson’s big win when they lost Trevor to get the victory over Syracuse,” he said. “He’s a really good player. I like their backs. I think they possess great depth with (Deon) Jackson and (Mateo) Durant. They are backs that can make big plays. The guy that concerns me is (Damond) Philyaw-Johnson with his speed. The tight end (Noah Grey) is a guy they’re going to get the ball to.”

But to make plays Brice will need the threat of a running game the Blue Devils lacked last year and a time to find open receivers.