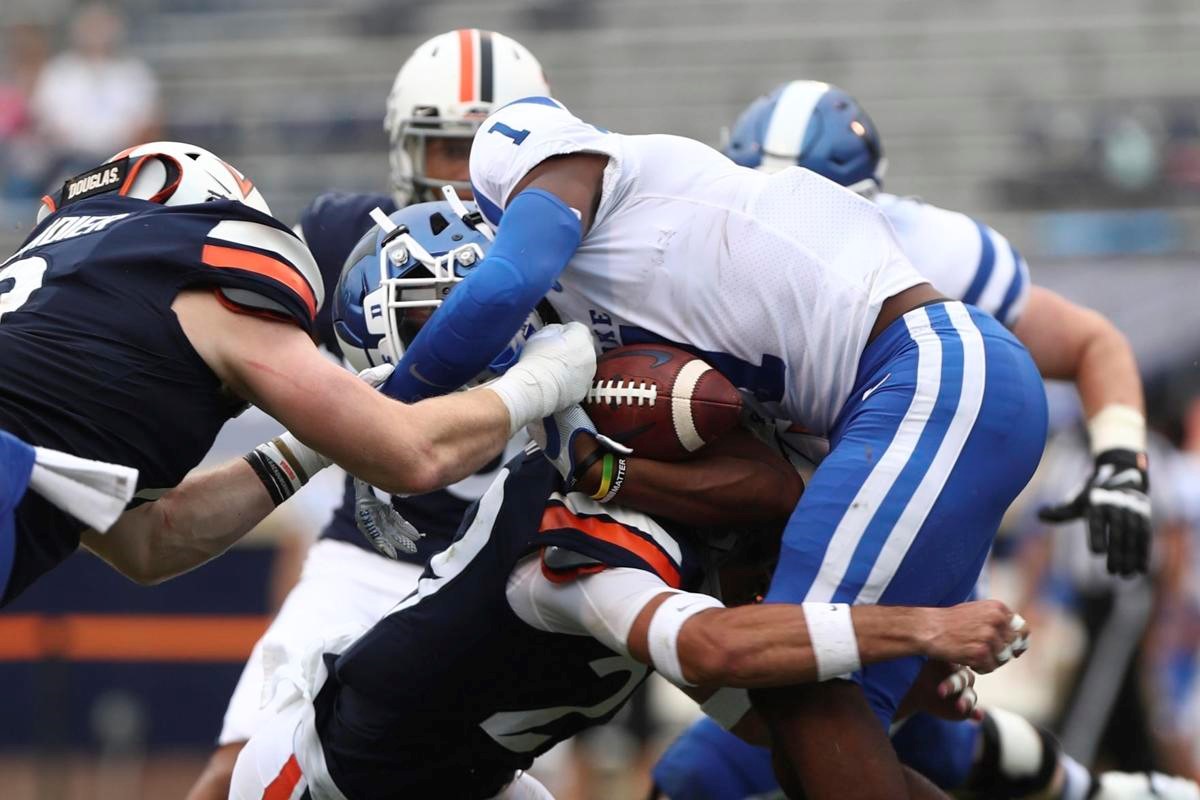 PHOTO: Duke’s Jontavis Robertson is gang-tackled after a 4-yard reception.

Duke’s promising season-opening loss to Notre Dame now seems like it was played in an alternative universe. In a COVID-19 Twilight Zone college football season, that’s not unusual, but it is cause for alarm for a lost season.

Duke dropping to 0-3 in three ACC games with Saturday’s 38-20 loss at Virginia has the Blue Devils almost a third of the way through their pandemic-revised 11-game schedule. Duke turned the ball over seven times, five interceptions and two fumbles.

“I do have concerns that in all three games, we have not played well late,” Duke coach David Cutcliffe said. “I do have concerns there, when it looks like there is some fatigue and you’re trying to play catch up in a conditioning mode. The bigger concern is taking care of the football on offense; 12 turnovers in two games gives you no chance to win. And we had our moments. We took the lead in the second half and could finish the work.”

Promising Clemson transfer quarterback Chase Brice struggled, finishing 16-of-36 for 246 yards with two touchdowns and four interceptions. He was under pressure all day and finished with 26 yards in losses for a net minus-23. Virginia forced five sacks for 22 yards.

He scoring passes connected with tight ends both times, hitting backup Jake Marwede with a 55-yard up the middle of the field for a 10-0 first-quarter lead and starter Noah Gray with an 8-yarder in the end zone to trim the third quarterback deficit to 20-17.

Next up is a 4 p.m. home game on Saturday against Virginia Tech (1-0), which opened up with an ACC win last Saturday night over N.C. State, 45-24, despite playing without dressing 23 players due to COVID. It was Virginia Tech’s first game after COVID infections postponed its opener against Virginia.

Duke, similar to the 26-6 loss at home two weeks ago to Boston College, was inconsistent throughout and let a close contest get away in the second half. BC outscored the Blue Devils 16-0 in the third quarter.

At Virginia, Duke came from behind to lead 20-17 lead in the third period, but the Cavaliers scored 21 unanswered points in the fourth.

In the 27-13 loss at Notre Dame, the Irish needed a 10-0 fourth-quarter to pull away in a game that was tight until the final four minutes.

The Blue Devils look like a team that is pressing with mistakes and inconsistency after have their season flip on them so suddenly and dramatically.

“Well, I think that’s certainly part of what we’re all battling,” Cutcliffe said. “Their stress levels have been high since they’ve been back. Their stress levels were high when they were home. These guys were away 129 days in a row with no organized workout. So, certainly I’m looking like that. I want them to have fun at practice with hard work. It can be fun. I want the to play free. I want them to take the field feeling confidence and prepared, and that’s my job.”

Cutcliffe pulled Brice, a redshirt junior, late in the game after his fourth interception at the Virginia 37-yard line with 9:12 remaining and the Blue Devils trailing 31-20.

Reshirt sophomore Gunnar Holmberg, who entered 6:32 left, fumbled a handoff exchange on fourth-and-1 for a 14-yard loss that gave Virginia the ball at the Blue Devils’ 10-yard line. The Cavs one play later with Taulapapa for Honolulu Punahou, President Obama’s alma mater, taking transport tickets with passengers on his back.

Redshirt junior Chris Katrenick took his turn with 5:03 remaining. He completed passes of 28 and 12 yards, but the Blue Devils gave the ball back on a fourth-and-16 from the Virginia 40 that gained only a yard when Katrenick’s pass protection broke down.

“We work all three quarterbacks every week,” Cutcliffe said. “We certainly will always be looking at that position just like any other position. But I don’t need to create anything just yet. Let’s see where we are and exactly what happened.”