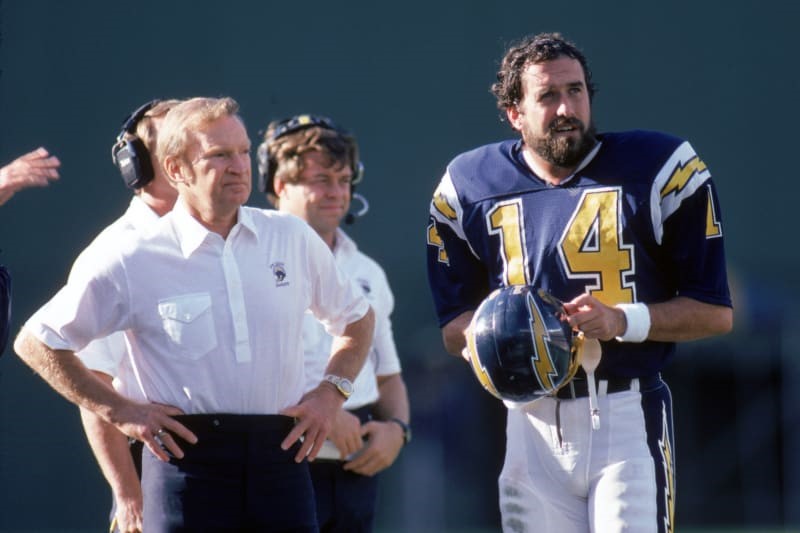 PHOTO: Don Coryell and Dan Fouts in their Air Coryell years changing the game of football.

“All three of us are in all Hall of the Fame because of Don Coryell,” said Madden, chocking up. “Something is missing.”

Madden’s eminent coaching and television voice shot through Fouts like a thunder bolt — or an Air Coryell lightning bolt pass. Coryell is the reason, they readily acknowledge, they own a gold jacket that the Pro Football Hall of Fame awards to inductees each summer in Canton, Ohio.

The Hall voters gather Saturday prior to Super Bowl LIII in Atlanta, and Fouts passionately hopes Coryell is elected this time. The coach that passed away at age 85 is again a finalist, an indication that respect is growing with perspective for his innovative passing offense over 14 years as an NFL head coach.

Coryell turned losing franchises, the Cardinals and Chargers, into division champions at a time when the Cardinals competed with Roger Staubach’s Super Bowl Cowboys in the NFC East and the Chargers against the Super Bowl Raiders and Super Bowl Broncos in the AFC West.

More significantly than the titles, though, Air Coryell began to push forward football 40-plus years ago to the 21st century’s modern game. His 1970s and 1980s teams posted unheard of numbers that are no longer uncommon. Many of his players benefitted with their first Pro Bowl trips.

In 1979, Air Coryell’s seismic statistical shift was Fouts’ 4,082 yards passing. The 4,000-barrier previously hadn’t been crossed other than Joe Namath’s 4,007 with the 1967 Jets in the old American Football League.

At the start of the 1980 season, some NFL pundits wondered if Air Coryell could repeat those numbers. They cautioned with defenses having an off-season to adjust, averaging 250 yards over 16 games to equal 4,000 was too much to ask.

What was once shocking is part of the game.

But Fouts believes the best example of Coryell changing the game in a copycat league was best illustrated by his dramatic influence on Don Shula, a Hall-of-Fame coach. Shula and the Dolphins won back-to-back Super Bowls with Hall of Fame QB Bob Griese completing 6-of-7 passes for 73 yards in Super Bowl VIII and 8-of-11 for 88 in Super Bowl VII.

“If Coryell can convince Don Shula to throw the ball,” Fouts added, “that says it all.”

Coryell’s fingerprints can still be lifted from the Super Bowl 32 years after his final game, in 1986. In the Super Bowl LII, Tom Brady threw for 505 yards and Nick Foles 373.

An unwritten criterion for a quarterback to earn a gold jacket was an NFL title or Super Bowl championship, and Fouts agrees that should be a primary box to check. But recent Hall classes demonstrate standards have evolved from a 26-team league in 1970 to one that now numbers 32.

Chipping away at that block began with Fouts as the first QB elected without a title in the Class of 1993. Warren Moon was the second in the Class of 2006. Marino entered sans a Super Bowl ring in 2005.

Fouts believes such a perception change was applied to coaches with George Allen’s induction in 2002. He never won a Super Bowl with the Redskins (1971-77) or with the Rams (1966-70). His lone conference title season finished with a Super Bowl loss to Shula’s Dolphins.

“There are coaches that have won a Super Bowl that don’t belong in the Hall of Fame,” Fouts said. “But they haven’t pushed the game forward like Coryell’s offense or Allen with defense and special teams. You cannot write the history of pro football without Don Coryell or George Allen.”

The Raiders edged the Chargers with a fluke tipped pass Raymond Chester took 65 yards for a touchdown. They lost to the Bengals in a game known as the Freezer Bowl. The temperature in Cincinnati was a minus-9 degrees, with 27 mph wind and a wind-chill report that was minus-59 under the former index.

But rather than excuses for two title games, Fouts blames the Chargers’ front office. He says it didn’t allow Coryell control of his personnel or coaches, explaining the front office fired defensive coordinator Jackie Simpson following the 1980 season.

Simpson’s 1980 unit was ranked sixth in the NFL in total defense (293.2 yards a game). That season the Chargers’ defensive line of Fred Dean, Gary Johnson, Louie Kelcher and Leroy Jones – known as the Bruise Brothers — led the league in sacks with 60. Dean, Johnson and Kelcher started in the Pro Bowl – the only time one team featured three defensive linemen as starters.

“That was at a time when the Pro Bowl meant something to players,” Fouts added.

Fouts noted that Pardee lasted only one year and then the scheme and personnel adjustments began anew under Tom Bass.

Coryell’s candidacy has been hurt by the thought Hall-of-Fame coaches Sid Gillman and Bill Walsh preceded him as fathers of the modern passing game.

“Don was equally if not more impactful,” Fouts said. “Walsh was my offensive coordinator with the Chargers (in 1976). When Coryell came to the Chargers we discussed Walsh’s weakside passing game that came to be known as the West Coast offense.

“Air Coryell combined Don’s vertical game with Bill’s horizontal game. That led to three straight 4,000-yard seasons. It’s a copycat league, so Don’s willingness to add Walsh’s style is a credit – not a mark against him. Don used the whole field.”

Fouts believes defensive strategies that pulled a linebacker for a fifth (nickel) or sixth (dime) defensive back were directly related to Air Coryell.

“He influenced offense and defensive football,” he said. “If you are going to have three or four receivers out there, you better have an answer for it on the other side of the ball.”

Fouts, laughing, says Steelers Hall-of-Fame linebacker Jack Lambert, who once said of quarterbacks “it might be a good idea to put dresses on all of them,” remains angry over nickels and dimes to this day.

“Whenever I see him at events, he greets me the same way,” Fouts said. “We were both at a card show when my agent and I walked into a bar. Jack was already there. He saw me, stood up in front of everybody and said, “F— you, Fouts!”

Another shocking Air Coryell statistic that has turned routine is receivers gaining 1,000 yards.

“I love Charlie Joiner, but without Don Coryell he is not in the Hall of Fame,” Fouts said. “Kellen Winslow is not. Madden, Gibbs and I aren’t. If John Jefferson had remained with the Chargers (he was traded after the 1980 season in a contract dispute) or Wes Chandler had joined us earlier in his career, one of them would be a Hall of Famer.”

Fouts added the simplicity of Coryell’s offense, built around his system of digit routes he designed at San Diego State to help junior college recruits quickly learn the offense, aided a smooth transition from Jefferson to Chandler.

One unintended consequence of prolific passing games has been the diva wide receiver. Ironically, Air Coryell was anti-diva.

“We could have had divas, but Air Coryell, without a primary target, wouldn’t allow it,” Fouts said. “Our system required all the receivers to run routes hard because the defense’s response determined where I went with the ball. I had an idea who my target was, but I didn’t know for sure until the snap.

“It’s not like today when you see receivers casually run out routes when they know they’re not the primary target. That wouldn’t fly with Don – or Dan.”

On NFL.com, a page on the history of rule changes states the league pleads guilty to alterations designed to promote scoring and excitement.

The page doesn’t mention Air Coryell, but as a byproduct of the offensive style, fans have accepted rules that promote throwing the ball, limit hits on the quarterback and more recent safety rules vital to the game’s future.

Fouts adds Coryell was quick to exploit the new rule with motion.

“We had John Jefferson and Kellen Winslow crossing the line of scrimmage with a full head of steam,” he said. “Try bumping them once they’re five yards down the field.”

Fouts, who was drafted out of Oregon five years before Coryell joined the Chargers, adds the College Football Hall of Fame got it right when Coryell was enshrined in the Class of 1999. He remains the only coach with 100 wins in college and the NFL.

Gibbs and played and coached under Don at SDSU and with the Chargers before he was the Redskins’ head coach.

Fouts also cited Coryell’s fearlessness. He wasn’t afraid to throw the ball out of the end zone to loosen up the defense. And in the Chargers’ epic 1981 overtime playoff win against at Miami, Fouts completed a crucial fourth-and-one pass to Winslow.

The time-honored phrase “seven degrees of separation” applies to a long list of names connecting Coryell to those that achieved the Hall of Fame or simply fame.

“Don belongs in the Pro Football Hall of Fame,” Fouts said. “If my words aren’t enough to convince you, listen to John Madden.”