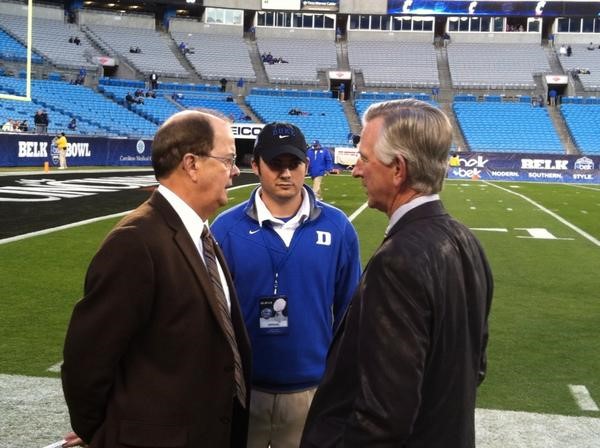 David Cutcliffe described himself as a “basket case” on a long ago Friday night. It was the day before his 2003 Ole Miss team he coached faced visiting Alabama at Vaught-Hemingway Stadium in Oxford, Ms.

At the time Cutcliffe, now in his ninth year as Duke’s head coach, had Ole Miss off to a 2-0 start in SEC play. But it wasn’t Alabama that had Cutcliffe’s nerves jangling.

“I would go to the games and be a basket case,” said David Cutcliffe, speaking as the father. “That was harder than playing Alabama the next day.”

On Friday nights, “the father” was just another helpless fan watching plays good or bad take place. But on Saturdays, “the coach” was reassured by having his own game plan to follow and the decisions that he would make to adjust to plays.

Cutcliffe, 61, is about to run the range of similar emotions now that the 2016 season has arrived, although for a different reason and from a longer distance.

Chris Cutcliffe, 29, has followed his Dad into the coaching profession as the new head coach at Oxford this season. He was promoted after five years as an assistant coach and math teacher at his alma mater.

Said “the father” of tuning into Oxford games over the Internet: “It’s harder for me to listen to his games on Friday than to coach on Saturday. My palms are sweating on Friday.”

The apple doesn’t fall far from the tree.

“It’s the same for me,” Chris said. “I get more nervous watching Duke games on TV than I do at our games. You’re so invested in the Duke game, but you’re only a spectator. It’s so different.”

On the surface, Chris has followed his father into football, but there is more depth to his motivation than the thrill of competition or the X’s and O’s chess game on grass.

Chris’ mother Karen was a first-grade teacher in addition to his father climbing the ladder from high school coaching and teaching at Birmingham (Ala.) Banks, his alma mater, to the college ranks.

“I remember being a kid at the mall with my mom and one of her old students saw her,” Chris said. “She ran up to her, hugged her and thanked her. That always stood out for me. I saw the same thing from my father’s players. They always came back to campus to spend time with him.

“I always thought that was the neat part of sports. I knew from an early age I wanted to work with young people and hopefully have an impact on their lives like my Mom and Dad.”

Chris’ youth around the game with his father includes playing catch after practice with the likes of a Tennessee quarterback that went on to some fame, Peyton Manning. Same with when his father was the head coach at Ole Miss and the quarterback was named Eli Manning.

Chris later graduated from Tennessee and earned a Masters’ degree at Duke. He was a team manager at Tennessee and part of the football staff at Duke, learning the trade alongside his father.

“It was a great experience working with my Dad, but I wanted to show everyone I kept the job by working hard,” Chris said. “I wanted to earn everything I got. I took pride in that. That’s how I still look at it.”

Now, Chris works alongside his Oxford mentors that are still teaching on campus. He even convinced one of his Oxford coaches to return to football program as one of his assistants.

In that long ago 2003 season, Chris led Oxford to a state runner-up finish in the Mississippi High School Activities Association s 4A division. That same year David led Ole Miss to a 10-3 season that included sharing the SEC West title with LSU, which went on to win the national title under Nick Saban.

That’s a lot of victories and too many jangling nerves.

But many years later, Chris also is passing on the lessons of life through football. Father and son are only unnerved when they helplessly follow each other’s team.