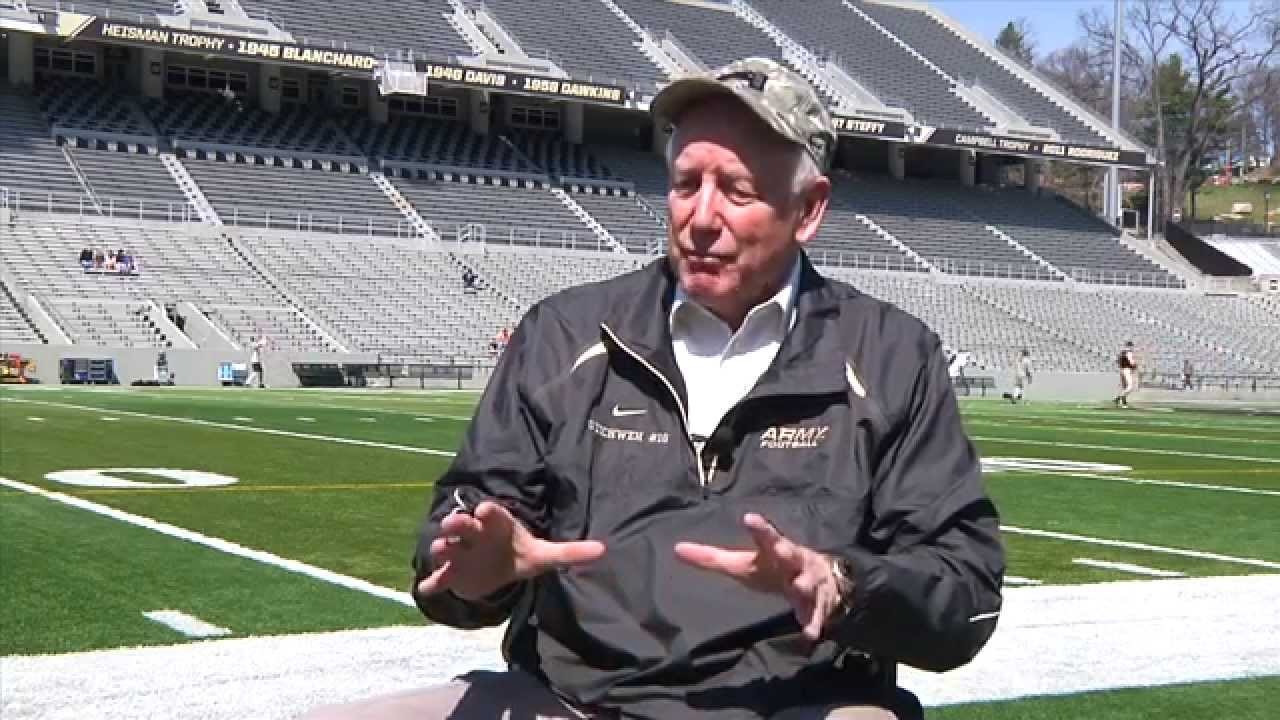 History links Army football’s 1964 and 2016 wins over Navy as two of the more emotional triumphs in the rivalry’s 117 meetings. Although separated by a half-century-plus, Rollie Stichweh enjoyed a hand in both victories.

First, he was West Point’s senior quarterback directing the Black Knights’ 11-8 victory. Army’s only touchdown was Stichweh’s 5-yard pass to tight end Sam Champi. The win avenged a haunting 21-15 loss in 1963 to the No. 2-ranked Midshipmen and quarterback Roger Staubach, the Heisman Trophy winner.

Stichweh (STICH-way) earned the seat from volunteer hours served on ad hoc committees along with Army 1958 Heisman Trophy winner Pete Dawkins and others. They examined why the Black Knights had fallen behind service academy rivals Navy and Air Force.

They offered recommendations, and the work has been rewarded with the 2016 victory. It ended a 14-year losing streak to Navy and propelled the Black Knights (8-5) to their first winning season, first bowl trip and first bowl victory since 2010.

“I had the opportunity to go down in the locker room and observe the joy and the relief on the faces of the young men, head coach Jeff Monken and his assistant coaches,” Stichweh said. “It was a great day for everyone. It’s a day they can build on for recruiting.”

Army’s 1964 victory ended only a five-game losing streak to Navy, but try telling Stichweh and his teammates it was “only” five. A sixth straight loss at the time would have been the longest.

Navy took a 21-7 lead with 10 minutes to play, but Stichweh not led a drive to trim the deficit to 21-15 after a two-point conversion, he recovered the onside kick. Army advanced to the 2-yard line but time expired before the final snap.

A year later, Army’s revenge gave Stichweh a 1-1 split with Staubach as his rival quarterback.

“The 64 game was a big deal for us,” Stichweh said. “I’m very proud of our team that we sucked it up and came back and to beat Roger head-to-head in the rematch.”

The victory remains tied to the 1963 Army-Navy Game played under the shroud of national mourning. It was just 15 days after President John F. Kennedy’s assassination in Dallas.

In the pre-Super Bowl days, no football contest captivated America’s attention more than the Army-Navy Game. It was expected to be canceled, but First Lady Jacqueline Kennedy and the President’s brother, Attorney General Bobby Kennedy, said the President would have wanted it played. President Kennedy loved college football and had attended the 1961 and 1962 games. The coin he was scheduled to flip at the 1963 game has been used at recent Army-Navy Games.

Staging the iconic game accompanied by the drama that unfolded has been credited with helping the nation heal.

Both games were played before 102,000 fans in Philadelphia’s cavernous stadium – Municipal Stadium in 1963 and renamed John F. Kennedy Stadium in 1964 (the Wells Fargo Center stands on the site).

By the 1964 rematch, the Staubach-Stichweh rivalry had grown into an enduring friendship. Stichweh and Staubach were paired together during the Cadet-Midshipmen exchange between West Point and Annapolis that takes place during their junior years.

“We really got to know each other,” Stichweh said. “We found we had common interests and views.”

When Stichweh visited Annapolis, he was seated with Staubach at Bancroft Hall. A Midshipmen, following tradition, attempted a prank of dumping a bowl of mashed potatoes on Stichweh’s head, but Staubach quietly alerted him. Stichweh thwarted the Midshipmen, grabbing his arm.

As college athletes, the academy legends were considered equals by no less than Staubach and the legendary Sports Illustrated writer Dan Jenkins.

In an Oct. 5, 1964 SI article written by Jenkins, he suggested Stichweh as a candidate to succeed Staubach as the Heisman winner. Staubach had won the award as a junior.

“… the West Point first classman might be this season’s Roger Staubach since, apparently, Navy’s Staubach is not.”

Notre Dame quarterback John Huarte won the 1964 Heisman, but a SI feature by Dan Jenkins, an sportswriter icon, is lofty praise to have on your athletic resume with or without the bronze stiff-arm trophy.

Staubach made his opinion clear when Stichweh was up for the Army Sports Hall of Fame in 2012 with a letter of endorsement.

“I think Rollie Stichweh, besides being a terrific person, was one of the best football players and athletes I ever saw – without a doubt he could have been an outstanding pro.

“Rollie deserves to be inducted to the Army Hall of Fame, not only for his outstanding character and Army football record, but also his service Vietnam, exceptional business career, West Point Association of Graduate Leadership positions and distinguished community service.”

Staubach rearranged his plans to serve at the presenter at Stichweh’s West Point enshrinement. A Navy man presenting an Army Hall-of-Famer had not happened prior to or since then.

Stichweh’s 1964 season included noteworthy praise from Texas coach Darrell Royal. Army traveled to Texas to face the defending national champion and No. 1-ranked Longhorns. Texas won 17-6, but Royal, a College Football Hall of Fame coach, called Stichweh “the best back in the country.”

Following their senior seasons, Stichweh and Staubach played together in two college all-star games. Staubach was drafted by the Dallas Cowboys, who patiently waited for him to fulfill his military commitment. He played 11 NFL years and is in both the College and Pro Football Halls of fame.

Stichweh drew interest from the New York Giants and Oakland Raiders, but an opportunity to sign never developed. He was sent to Fort Bragg, N.C., to train with the 82nd Airborne as Vietnam heated up.

“I give Navy credit – the Navy really supported Roger,” Stichweh said. “He was able to go to training camps with the Dallas Cowboys. The Navy has gotten a good return on its investment. He’s been a Navy ambassador for 50 years.”

Stichweh’s Vietnam tour overlapped the 1968 Tet Offensive. He was twice decorated for valor while serving with the elite 173rd Airborne Brigade in the Central Highlands jungle along the Ho Chi Minh Trail.

“The priority at the time was doing your part and honoring your commitment,” Stichweh said. “When we were recruited out of high school, at that time no one had heard of Vietnam. But four years later it was hot. It’s disappointing on one hand to not have an opportunity to play at the pro level, but you can’t dwell on it.”

Stichweh retired as a captain and went onto a successful career as a business executive with a worldwide firm, Willis Towers Watson. Since then he has kept busy supporting non-profit causes such as Camp Dudley for boys and Norwalk Hospital in Connecticut. And, of course, he devotes time to West Point and the football program when called upon.

He has a lifetime of experiences, and they are linked together by two unforgettable Army triumphs.