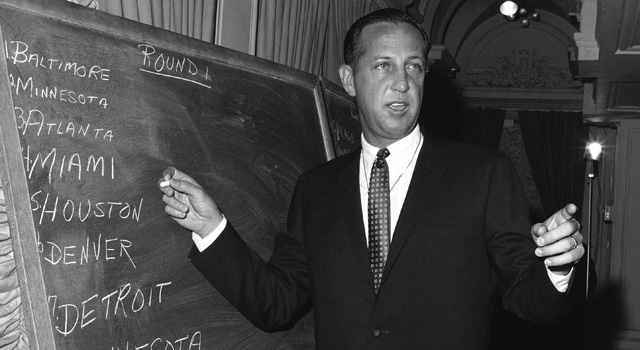 A half-century ago the NFL Draft was so simple NFL commissioner Pete Rozelle stood at a chalkboard in a New York hotel ballroom. He scrawled names in chalk as they were called out.

The anticipation hovering over the draft was not about who would go where. It was relief — to the owners, not the players — that athletes were taken by only one team. The 1967 draft was the first since the NFL-AFL merger that ended bidding wars for talent between 16 NFL franchises and 10 AFL teams.

Today we’re inundated with draft coverage. We have live coverage on two networks, ESPN and NFL Network. Mock drafts have been drawn and redrawn since the day the previous draft ended. There is a TV green room for the top picks, their families and agents. Instant analysis is offered on the live coverage.

Daugherty recruited three of them out of the segregated South, Smith, Beaumont, Tex.; Webster, Anderson, S.C.; and Washington, La Porte, Tex. Jones was from Cleveland, Ohio. All four were two-time All-Americans now enshrined in the College Football Hall of Fame. Long-time pro football writers say Smith and Webster would be in the Pro Football Hall of Fame if not for knee injuries early in their career taking a toll.

In today’s electronic world, TV seeks “feel good” stories, but in the 1960s the media avoided race in sports. As a consequence, many stories about Michigan State athletes and other pioneers were overlooked. Six of the top eight choices were African American players. The other two were Syracuse’s Floyd Little (Denver Broncos) and UCLA’s Mel Farr (Detroit Lions) as the sixth and seventh picks.

The game was changing.

Just one year earlier, in the NFL draft with 16 teams and the AFL with 10 teams there were only four black athlete first-round picks overall among 26 teams. That was reflective of how few Black players were on college rosters, with the exception of Michigan State.

Daugherty’s teams broke the unwritten limitations of a half-dozen or fewer black athletes on a college roster, East to West, North to segregated South. Michigan State’s back-to-back national championship teams in 1965 (United Press International) and 1966 (National Football Foundation co-champions with Notre Dame) were far ahead of the nation. The 1966 Spartans listed 20 black athletes with 11 starters.

In 1962, the Associated Press reported Michigan State’s 17 black players was the most in major college football history. The difference was profound when compared to other 1960s national championship teams. Minnesota won the 1960 national title with five black players, USC won in 1962 with five, Notre Dame in 1966 had one and USC had seven on its 1967 national championship team. But by USC’s next national title in 1972, the Trojans had 23, Notre Dame 13 on its next title roster in 1973.

USC was not the model of integration as portrayed in misleading articles and documentaries surrounding the 1970 USC-Alabama. Those myths including outright fiction were crafted 20 years after the game was played.

Duffy Daugherty showed the way in the 1960s.

As late as 1967, much of college football — the SEC, ACC and defunct Southwest Conference — was still all-white. Kentucky was the first SEC team to integrate in the fall of 1967. Maryland integrated the ACC in 1963. SMU and Baylor in the Southwest Conference in 1966. Alabama dominates today’s draft, but the Crimson Tide didn’t dress its first black player until the 1971 season.

Of the 26 first-round picks in the 1967 draft, 16 were white, 10 black. In other words, after Michigan State’s four picks in the top eight, there were only six other black players chosen in the first round representing the rest of college football.

In the 1966 NFL draft, among 16 first-round picks there were 14 white players and only two black athletes (Dick Leftridge of West Virginia and Francis Peay of Missouri). In the 10-team AFL, there were three white players that had been named in the NFL draft. Of the remaining seven picks, five were white and two black (Karl Singer of Purdue and Aaron Brown of Minnesota).

In the 1965 NFL draft, Gale Sayers of Kansas and Clancy Williams of Washington State were the only two black players chosen among 16 first-round picks. In the eight-team AFL, there was only one black player, Jerry Rush of Michigan State.

The increase by 1967 was the trend toward Michigan State leading the way to offer more opportunities.

The 2020 draft was an extreme contrast. Among the 32 first-round picks of the 2020 NFL Draft, 29 were black. They were two white quarterbacks (Joe Burrow and Justin Herbert) and one Samoan quarterback (Tua Tagovailoa).

As for media coverage, forget a 1967 green room for players to huddle with family and agents and hangers-on before a player was chosen.

Listen to how Washington, who unlike today’s prospects leave school to train for NFL combine and workouts, learned the Vikings took him while he was still on campus earning his degree.

“The draft was going on, and I just happened to be in the football office,” Washington recalled. “One of the assistants called out to me, ‘Gene, you’ve got a phone call.’ ”

Keep in mind in those days the phone was wired to the wall.

“The guy says, ‘Congratulations, Gene. You’ve been drafted by the Minnesota Vikings in the first round. And Gene, you will be playing for Bud Grant. Bud is coming down from Winnipeg in the Canadian Football League to coach the Vikings.”

But the guy on the other end didn’t identify himself.

“I said, ‘Who are you?’ The guy says, ‘My name is Sid Hartman from the Minneapolis Star-Tribune.’ I told him, ‘That’s great news and I’m glad you shared it with me.’ After a while I hung up, and about a week later I got my first call from someone at the Vikings. That’s all the fanfare we got back in those days.”

The 1967 NFL Draft seems quaint by today’s standards, but Smith would have been perfect for the modern TV show. After Smith’s playing career was cut short of the Pro Football Hall of Fame path he was by a knee injury, he gained further fame as a pitchman with Dick Butkus for Miller Lite commercials. He also played Moses Hightower on the Police Academy movies.