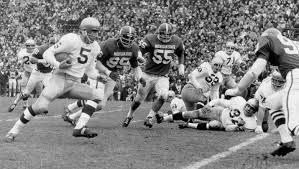 — “Duffy Daugherty was such a wonderful human being,” Hanratty said. “No one can ever turn me against Michigan State. When I told Ara I was coming to Notre Dame, I knew I had to call Duffy. I’m thinking, ‘This is going to be horrible’ because you hear all these stories about coaches jumping on kids.” — Terry Hanratty

A premise presented in the 1992 book on the Notre Dame-Michigan State Game of the Century played on Nov. 19, 1966 is summed up by the title of the late Mike Celizic’s work: “The Biggest Game of the Them All.”

Even bigger than the Super Bowl.

“Yes, yes – by far,” said Terry Hanratty, an authority on the subject as Notre Dame’s quarterback in the Game of the Century and a veteran of Super Bowls IX and X with the Pittsburgh Steelers.

“It was a ridiculously big game. None of us at the time had any clue that 20, 30, 40 and now 50 years later we’d be meeting people that tell us exactly where they were for the Michigan State game.”

That day Spartan Stadium overflowed with 80,011 fans packed into 76,000 seats. Michigan State quarterback Jimmy Raye says of the number of people he has met that told him they were at the game: “I think I’ve met all 80,011.”

A half-century has elapsed since the controversial 10-10 tie, so context for the 50th anniversary game on Sept. 17 matching the Spartans at Notre Dame is needed for many fans.

Hanratty, of course, is speaking of a time before the Super Bowl matured into a quasi-national holiday. The Game of the Century was the pre-Super Bowl eara. Super Bowl I, played two months laster on Jan. 15, 1967, failed to sell out.

A qualifier he points to was economic impact weather had on the his Game of the Century and Super Bowl experiences. The temperature was 33 degrees for the Game of the Century, but it deterred no one. Super Bowl IX was played on a rainy, 46-degree day at outdoor Tulane Stadium (the SuperDome had yet to open).

“It was bad weather, and you could get tickets for $5 outside the gate,” Hanratty said. “You would never see that today.”

Hanratty, though, chuckles at Pittsburgh teammate Lynn Swann’s expense over how he cashed in on the Super Bowl IX tickets before the team left for New Orleans.

A travel agency in Pittsburgh was buying all the tickets it could for junkets,” he said. “They were paying $150 for a ticket. The players got four free tickets and you could buy 20 more. Then you could flip them for $150. That was a good deal in those days. I took it to the max. I talked to Lynn Swann. I said, ‘Swannie, did you sell your tickets?’ He said, ‘No, if I can get $150 here, I’ll get $300 down there.’

“Well it turned cold and rained. I asked Swann, ‘Do you still have those tickets?’ He fans them out in front of me. I had a salt shaker behind my back and I put salt on his tickets. I said, ‘They taste better with salt on them.’ ”

Jerry Markbreit, one of the NFL’s most recognized officials before he retired, backs up Hanratty. Markbreit had been a college ref that worked the Notre Dame-Michigan State game. He said he had never experienced a football atmosphere with the energy vibrating throughout East Lansing until he joined the NFL and worked Super Bowls.

The Game of the Century drew a then-record TV rating 22 share. Catholic churches altered their service times so fans could get home in time for the kickoff. It was the first game to use new satellite technology so it could be broadcast live in Hawaii.

Rocky Bleier, Hanratty’s teammate at Notre Dame and with the Steelers for their first two Super Bowls and two more in XIII and XIV, disagrees with Hanratty, saying the Super Bowls were bigger. Nevertheless, putting the Game of the Century and Super Bowl in a discussion is telling.

Add the juniors and sophomores to the seniors (freshmen were ineligible for the varsity until 1972) and playing that day were 10 first-round draft picks, 42 overall draft picks, 33 pro players and 25 with All-American honors.

“I still say they are the two best teams to ever play each other,” Hanratty said. “You look at the amount of talent that was on both sides of the field.”

A season-long buildup of unbeaten teams ranked No. 1 and No. 2 multiplied exponentially each week they won. With the late November date, it grew into a quasi-national championship prior to the eras of Bowl Championship Series and College Football Playoffs.

Adding magnitude was neither team would play in a bowl game. The Notre Dame administration’s ban on bowl participation remained in place until the 1969 season. The Big Ten’s exclusive contract with the Rose Bowl and its no-repeat rule prevented the Spartans from returning to Pasadena after their 1965 UPI national championship season.

Michigan State began the 1966 season ranked No. 1, but at midseason Notre Dame took over as No. 1 and the Spartans replaced them at No. 2. The AP and UPI poll voters dinged Michigan State for an 11-8 win at Ohio State in monsoon-like conditions. The same day Notre Dame beat Duke at home, 64-0.

Michigan State’s season was complete with the 10-10 tie, but Notre Dame had one more game. The Irish traveled to Los Angeles and routed USC, 51-0. The AP and UPI voters named Notre Dame national champion. The National Football Foundation’s MacArthur Bowl, citing the tie on the field and identical 9-0-1 records, named the Irish and Spartans co-national champions.

Hanratty played only two series before he exited for the day with a separated shoulder compliments of 6-foot-7, 285-pound defensive end Bubba Smith. It was a painful hit then, but Hanratty and the College Football Hall of Famer, passed away in 2011 at age 66, later became friends. Smith’s legend lives on.

Hanratty ran a quarterback draw when he was wrapped up by two-time All-American and College Football Hall-of-Famer George Webster. But Hanratty was still upright as Smith, pursuing like a freight train, drove his shoulder into the turf.

“It was a good hit,” Hanratty said. “There wasn’t anything cheap about it. It was a good, hard football play.”

Hanratty stayed in the game for the third-down pass play, but his injury forced a feeble ball. On his way to the locker room to be examined, Notre Dame head coach Parseghian asked why he ran a quarterback draw; he sent in a halfback draw for Bleier. But Hanratty said he heard quarterback draw relayed in the huddle.

“I thought it was strange because we hadn’t run that play in a few weeks,” Hanratty said. “So I take my 15 steps and all of the sudden there is a sea of green. I l look out of the corner of my eye, and here comes Bubba.”

If Hanratty was going to be knocked out of The Biggest Game of Them All, at least it was at the hands of two College Football Hall-of-Famers.

Coley O’Brien replaced Hanratty and rallied the Irish from a 10-0 deficit to a 10-7 halftime score and the 10-10 tie in the era prior to tiebreaker rules. One of Smith’s post-game comments was that the Spartans had prepared for Hanratty in the pocket and were crossed up by the smaller O’Brien’s mobility. Hanratty is still trying to set the record straight on that one.

“Bubba was full of s—,” he said with a laugh. “No one scrambled as much as me. In the pros I stayed in the pocket. College, I roamed.”

Hanratty speaks warmly of Smith despite that painful hit. They became friends in their NFL playing days and both were pitchmen for the popular Miller Lite beer commercial series that set advertising industry standards.

“Bubba was a really good person,” Hanratty said. “He had a great sense of humor.”

Smith and Pro Football Hall of Famer Dick Butkus were featured in many of the Miller Lite commercials and nationwide appearances. Smith didn’t drink, but he Miller’s challenge to Budweiser’s dominance of the domestic beer market drove him.

Until Smith suddenly dropped out of the Miller Lite campaign based on his experience as Michigan State’s 1985 homecoming grand marshal.

As he rode through the parade in the back of a car, he loved that on one side of the street older fans reenacted a chant from his playing days at Spartan Stadium: “Kill, Bubba, kill!” But he was disturbed students on the other side of the street chanted the Miller Lite commercial chorus: “Tastes great! Less filling!”

“Bubba turned down a lot of money when he stopped doing those commercials,” Hanratty said. “That’s admirable stuff.”

Then he added dryly, “Dick Butkus was pissed.”

Hanratty, 68, feels linked to the Spartans a through much more than the game.

“Duffy Daugherty was such a wonderful human being,” Hanratty said. “No one can ever turn me against Michigan State. When I told Ara I was coming to Notre Dame, I knew I had to call Duffy. I’m thinking, ‘This is going to be horrible’ because you hear all these stories about coaches jumping on kids.”

Michigan State’s Clinton Jones, a College Football Hall-of-Famer and two-time All-American halfback in 1965 and 1966, has such a story. Ohio State head coach Woody Hayes cussed him out  on the phone when Jones told him he was committed to the Spartans.

“I told Duffy,” Hanratty said, “and he went on for 20 minutes about what great school Notre Dame was and what a great guy Ara was. He made that very difficult call for a 17-year-old kid special. I’ll always have a fondness for Michigan State because of Duffy.”

“There were classy guys on both sides of the field,” Hanratty said. “Once the whistle blew after the game, everybody liked everybody. Good thing the game ended in a tie or we’d all be forgotten by now.”

Duke’s Three Amigos proving to be a balanced combination