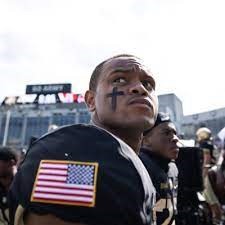 Visit my wesbite homepage, TomShanahan.Report
Tom Shanahan is an author and college football integration historian. The Football Writers Association of American awarded him first place for his story on segregation the 1962 Rose Bowl.

My “West Point Football Report” provides features on Army’s football players. Your subscription fee through Substack and Stripe will be donated, 100 percent, to the Wounded Warriors Project my 501-(c)(3), Books for Sparty. Click here

Tom Shanahan is an author and college football integration historian. The Football Writers Association of American awarded him first place for his story on segregation the 1962 Rose Bowl.

Army West Point senior defensive back D’Andre Tobias finished one of the final practices of his career on a chilly Wednesday night alongside the Hudson River.

Although the backup defensive back has been healthier this season in an otherwise injury-marred career, a 3-6 record has tempered the team’s satisfaction with 2022. Remaining upbeat this late in the season isn’t helped by darkness arriving an hour sooner from rolling back daylight savings time. A late autumn wind whips off the river. On Tuesday, an early snowfall arrived on campus.

But the long day isn’t done.

He needs to hustle to make it to dinner in time. There is homework before taps at 11:30 and lights out at midnight. The next day, at 6 a.m., the routine starts over. There is formation, breakfast and the first classes at 7:35 a.m.

If that’s not enough to handle, on this early Wednesday evening, Tobias is asked to complete another task. He’s scheduled to participate in a 7 p.m. Zoom call with the media to discuss Senior Day. Army plays its final home game against Connecticut (5-5) Saturday at Michie Stadium.

Tobias takes his seat behind a table. A wide smile breaks out. His trademark smile’s shine on this busy night was equal to the wattage boosted by preseason optimism when he met in late August with the media.

After all, a civilian colleges coast to coast, it’s safe to say regret occupies the mind of many backup seniors at places such as 3-7 Nebraska, 3-7 Texas A&M or 3-7 Arizona State. Their career didn’t turn out as hoped as a wide-eyed freshman.

But regret is the last thing on Tobias’ mind.

He may not have fully understood it when he reported as a freshman for Beast Barracks (boot camp), but the Cadets who endure the four-year challenges realize they’re at West Point for a bigger purpose. He’s one of only 19 seniors out of a recruiting class of 50-some prospects who made it all the way through their football career.

“West point pushes you,” Tobias explained. “It’s very rigorous handling classes – physical education classes as well — football, going to treatment and watching film. It’s been a bumpy road. I’ve battled injuries along with maintaining my position in the Corps (student body) and other things I was doing in a leadership role.

“It’s challenge in many ways , every single day, but it has made me a better man. Even in the low times I learned from that. I’ve appreciated that about everything. I’m very excited about my last year. My time here flew by. I’m excited for the next chapter of my life.”

“Senior Day has been special at every school I been at, but I’m not sure every day I come to work I don’t get a little bit of a feeling that, ‘Hey, look where I’m at. Look who I get to work with.’ These guys are awesome.

“I don’t have the vocabulary to effectively to use to reflect just how much I care about what these guys do for me, our coaching staff, our alumni and for our county … everything. It’s amazing to see the work ethic they have from the minute they get up in the morning until they go to bed. I was talking to a player who got only two or three hours sleep because of homework and making sure he was taking care of everything in the classroom. And then he comes to practice gives great individual effort on the football field. It’s tremendous. It’s an unbelievable group of people who graduate from here every year.”

In 2022, Tobias has played a backup role to safety Marquel Broughton, a third-year starter and rare second-year team captain. But Broughton has been struggling with injuries in recent games, including missing last week’s 10-9 loss at Troy. He has eight tackles and one for a loss this season.

“D’Andre has given us critical reps in games this year,” Woody said. “He has fought through injuries in his career to come back and help us. He’s a smart, smart football player. He’s great to be around. He has an outstanding personality.”

Army’s defense started the year slowly in a 0-2 start. In the season opener at Coastal Carolina, the Chanticleers scored 24 points in the second half for 38-28 victory. In the home opener a week later, UT San Antonio scored 21 points in the second half to force overtime. Army took a 38-35 lead when it had the ball first in OT, but a UTSA touchdown sent the Roadrunners home with a victory.

“We would not have continued to progress on defense if it hadn’t been for (Tobias),” Woody said. “We need his reps in a ballgame game. It’s not always the starter who is the most important. You’ve got to have guys who can come in on packages and come in an get reps at certain points in the ball game. Sometimes that’s harder to do than starting.”

Army mathematically can still make a bowl game, but the Black Knights need to win their final three games and gain an exception from the NCAA. Teams can only count one victory over a Football Championship Subdivision member toward six-win bowl eligibility. Two of Army’s wins are over FCS schools Villanova and Colgate.

Tobias explained how the seniors are balancing a disappointing record as they prepare to take field at Michie for the final time.

“Wins and losses are always going to be there,” he said. “But the guys pushed themselves every day to be who we are. We’re never going sit back and regret how hard we worked, the guys we did it with and that we loved everybody while we did it. That’s the biggest thing.”