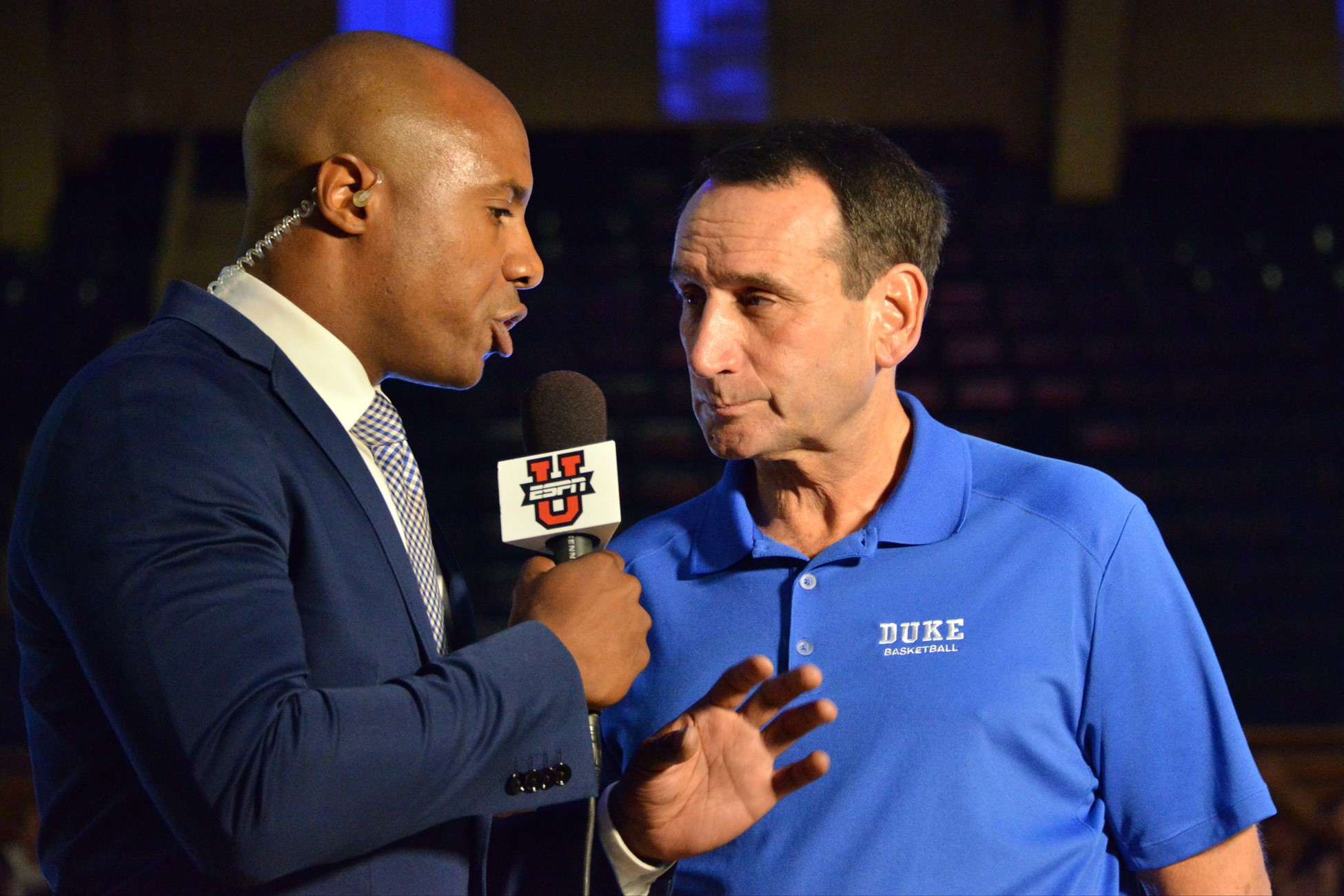 This must be some kind of inside joke between Jay Williams and Coach K.

Any thoughts that Mike Krzyzewski would pull a Tom Brady and reverse his retirement decision during the season were scoffed at for good reason. They’d still be dismissed as ludicrous if such a claim came from anybody but Williams, whose credentials are former Duke basketball player and respected media personality with his various ESPN platforms.

But that’s what Jay put out there a couple days ago when reports surfaced Duke assistant Nolan Smith planned to accept a job associate head coach under new Louisville head coach Kenny Payne. Because it came from Williams it gave people pause.

But it can’t be true.

Coach K is 75 years old and was exhausted by the end of his 42nd year as the Blue Devils head coach and 47th overall counting his five seasons at Army West Point, his alma mater. Every game he walks from the locker room across the court to the bench you can see his labored gait from back, hip and knee surgeries. You can hear the artificial parts clanging and grinding.

Late in the season, he had to leave the bench for the second half of Duke’s February 15 home game against Wake Forest. He was feeling light-headed in the first half. The assistant coaches and team trainers brought him water. When he didn’t return for the second half, the team released a statement he wasn’t feeling well, and he didn’t return to the game. Jon Scheyer, the head coach in waiting, guided the Blue Devils home to a 76-74 victory.

He had already missed a game Duke’s first game – coincidentally – at Wake Forest. A non-COVID illness kept him home for the bus trip to Winston-Salem that the Blue Devils won 76-64.

They went down as Coach K wins, but Scheyer was 2-0 docking the USS Duke on the two occasions he had to take the helm of the ship. By the time Duke won twice without Krzyzewski the assistants could joke they didn’t need Coach K.

Krzyzewski put too much time into a succession plan to suddenly reverse course. When he announced in June he was retiring at the end of the season and Scheyer was the choice to succeed him, he explained he was acting on his U.S. Army background. Most fans know he played and coached at Army, but they overlook he served his obligatory four-year stint as a Lieutenant upon graduation with a promotion to Captain. He followed the planning that goes with a change of command in the Army.

At the end of the regular season, excerpts from Ian O’Connor’s new book, “Coach K” reported Krzyzewski and Duke president Vincent Price were at odds over his successor. Price wanted Tommy Amaker, a former Duke player and successful coach at Harvard. Amaker also is an African American, which would check a box that that has remained blank for Duke’s two major sports, football and basketball. Nothing wrong with Price bringing up that reason to hire Amaker.

But Coach K wanted an assistant coach sitting alongside him all year – not Amaker arriving at the end of the season. The Army succession plan also allowed Scheyer to recruit over the 2021 summer so that the incoming fall of 2022 players knew who their coach was by the time they arrived on campus.

Mike Krzyzewski, throughout his career, has been all that his good about his mentor, Bobby Knight, and none of what is bad about Knight. Coach K played for Knight at Army and spent a year as a graduate assistant on Army’s staff in 1974-75 prior to gaining the Army job on Knight’s recommendation.

Oh, we saw a little glimpse of Bobby Knight in him when North Carolina beat the Blue Devils in his final game coaching at Cameron. Coach K came out on the court and departed from the script when he said harshly the loss was “unacceptable.”

But after the Tar Heels handed Coach K his final loss in the Final Four semifinal game, he was his old self. The inner-Coach Knight was kept at bay.

“I’ve been blessed to be in the arena,” Krzyzewski said in his final press conference after the game in New Orleans. “And when you’re in the arena, you’re either going to come out feeling great or you’re going to feel agony, but you always will feel great about being in the arena. And I’m sure that that’s the thing when I’ll look back that I’ll miss. I won’t be in the arena anymore. But, damn, I was in the arena for a long time. And these kids made my last time in the arena an amazing one.”

That doesn’t sound like a guy contemplating a farewell tour as a 76-year-old coach.

Jay, you must be chuckling about sneaking in one last inside jab on Coach K.

College football integration lore, in the form of traffic, has been steered to a fairytale exit