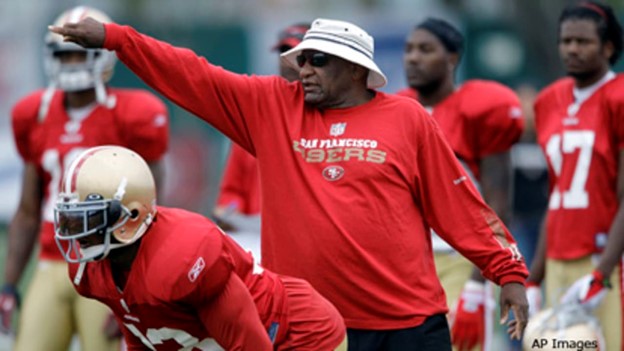 The Pro Football Hall of Fame announced Jimmy Raye has been named among the five assistant coach recipients of the Hall’s inaugural Awards of Excellence. Raye was a ground-breaking Black quarterback and assistant coach for Duffy Daugherty at Michigan State who continued his trailblazing in the National Football League.

The others honored in the assistant coaches’ category are the late Alex Gibbs, Denver Broncos offensive line coach; Ernie Zampese, an Air Coryell offensive coordinator with the San Diego Chargers and other teams; Terry Robiskie; and Fritz Shurmer. They will be honored at the Pro Football Hall of Fame in Canton on Thursday, June 30.

“They’ve honored commissioners and owners in the past, but this is the first time for this category of assistant coaches, public relations people, athletic trainers and equipment manager, so I’m very humbled to be a part of this group as an inaugural class,” Raye said. “It’s something I didn’t expect, and I’ll always cherish. A lot of it goes to my (late) wife, Edwina, for all the years of her sticking by me while I was coaching through all the ups and downs. I’m honored to be one of the recipients.”

When Raye was coaching in college, it was difficult for African Americans to break into the NFL. When the San Francisco 49ers hired Raye in 1977, there were only seven other Black assistant coaches in a 28-team league. His football knowledge soon carried him up the ladder. He was the second coordinator in NFL history when Los Angeles Rams coach John Robinson hired him as his offensive coordinator in 1983.

Robinson said it was an easy decision once he interviewed Raye. He was looking for NFL experience to go with his largely USC staff he was bringing with him across town.

“He had an encyclopedic knowledge of the NFL,” Robinson said in an interview years later. “We would talk about trying something and he’d say, ‘Well, Detroit did that in 1978 … or he’d say, ‘If we try this, they’ll cover it this way.’ These days you can call everything up on a computer, but in those days, it was mostly in a coach’s mind how a team would react. He was a very smart guy and knew the ins and outs of every team.”

Raye was one of the pioneering Black assistant coaches Tony Dungy named when he was inducted into the Pro Football Hall of Fame, in 2016.

Raye, in all, was an assistant coach 34 years. He also has served as president of the NFL assistant coaches and served the NFL office as a senior advisor.

Raye, a two-year starter in 1966 and 1967, was the South’s first Black quarterback to win a national title. He was enshrined in Michigan State’s Hall of Fame in 2018. Raye led the Spartans in the 1966 Game of the Century that ended in a 10-10 tie. The National Football Foundation named Michigan State and Notre Dame co-champions. He also played frequently as a sophomore backup in 1965 to All-American senior Steve Juday. The 1965 Spartans won the United Press International and NFF national titles and shared the Football Writers Association national crown with Alabama.

“These 20 outstanding assistant coaches, athletic trainers, equipment managers and public relations personnel not only helped to determine results on the field, but they also helped to promote the game’s growth, safety and popularity over several decades of devotion to their teams and to the National Football League,” said Jim Porter, the Pro Football Hall of Fame president.