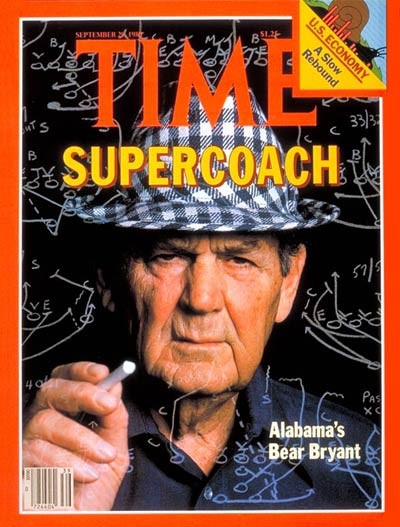 Michigan State’s 1960s teams opened doors as the sport’s first fully integrated rosters, influencing opportunities for the first Black athletes at southern schools. They endured abuse traveling down that path, but their leadership ultimately allowed USC’s Black players to compete without incident at Alabama. They were spared the indignities of segregated South.

Somehow, though, all the work of the true 1960s pioneers have been overshadowed by myths and fiction involving the Sept. 12,1970 USC-Alabama game at Legion Field in Birmingham.

The evidence to accept the 1970 USC-Alabama deserves credit for shifting integration attitudes in the South over the true 1960s pioneers is equal to believing Alabama coach Bear Bryant mounted Traveler, USC’s white horse, and rode onto Legion Field to inform Alabama’s bigoted fans it was time to let him recruit Black athletes (without saying anything about permitting their parents to vote).

There is only conjecture, yet the myth, which first spread in the 1990s, continues to be told and celebrated by a gullible media regurgitating the same story, including HBO, Showtime and ESPN.

The linchpin to the whole mythical night – the story of Bryant escorting USC fullback Sam Cunningham, an African-American, into the Alabama locker room to show his players what “a football player looked like” has been debunked as fiction. Cunningham admitted in 2003 the locker-room scene never happened.

So, how can it be the true pioneers remain in the shadows?

Spivey, a Distinguished Professor of Miami’s College of Arts and Sciences, researched and wrote papers in the 1980s. He labeled “Black Historiography” as Black athletes writing unwritten history from World War II through the 1960s. The mainstream media avoided avoid race in sports and the consequence was unrecorded milestones.

It has been my experience, through freelance pitches, major media platforms fear challenging the established legend of Bear Bryant. Editors are content – even one that told me Bear Bryant gets too much credit — with revisionist history that has gilded Bryant’s image, no matter the gaping holes in the tale.

Syracuse’s Ernie Davis’ milestone was covered, of course, as the first African-American to win college’s most prestigious prize in 1961, but that was an exception.

But college football lore has overlooked Jimmy Raye as the South’s first Black quarterback to win a national title as a 1965 backup and 1966 starter. The College Football Hall of Fame and National Football Foundation recognized the milestone in 2015 following the publication of “Raye of Light, Jimmy Raye, Duffy Daugherty, the 1965-66 Michigan State Spartans and the integration of college football.” The milestone had been overlooked in real time and unrecognized for a half-century.

There are many more examples of Black athletes in college football and other sports.

James Brown of CBS Sports reported broadcast a feature over the weekend on the Pittsburgh Pirates fielding Major League Baseball’s first all-Black/all-Latino lineup on Sept. 1, 1971. The moment had gone unrecognized.

The Associated Press reported in 1962 Michigan State’s 17 Black athletes was the most in college football history, but it was a regional story. USC gained a reputation as a model of integration through the 1970 USC-Alabama myths, although the Trojans were one of the schools that followed the unwritten quota widely followed of a half-dozen or so Black athletes.

“People today don’t realize the price and pain that was paid by an individual to break barriers in segregation,” said LeVias, a College Football Hall of Famer and six-year NFL veteran.

Among the stories in the shadows along with Jimmy Raye:

— Hill endured cheap shots on the field. In a game at Clemson, the ticket attendants wouldn’t admit his mother until the Clemson president Robert Edwards came down to the game and invited her watch the game from his booth in the press box. But other ACC schools began to follow Maryland.

— LeVias, who also was a victim of cheap shots and played before Texas fans waving nooses in Southwest Conference games, was the first Black player to score a touchdown in an SEC stadium when the Mustangs visited Auburn in 1968. LeVias scored a touchdown and two-point conversion in SMU’s 37-28 win. This was two years before Cunningham and USC visited Legion Field.

— McClain was the first Black SEC player to score a touchdown when he scored six as a sophomore in 1968.

— McClain and Tennessee All-American linebacker Jackie Walker, an African-American, embarrassed Alabama 41-14 in 1969 at Legion Field. Walker, an African-American, sparked the rout with an interception return for a touchdown. Tennessee’s rout should have shocked Alabama’s fans into accepting Black athletes – a year before USC arrived at Legion Field.

— Kentucky’s Wilbur Hackett was the first Black captain in the SEC in any sport as a junior in 1969.

Black Historiography created the vacuum for the 1970 USC-Alabama myths to fill the room and spread unchallenged. Bryant’s apologists and USC’s mythmakers obfuscated the facts to absolve Bryant and USC for their lack of 1960s leadership.

Their underlying passions to hold up Bryant as a crusader in the face of overlooked evidence are worthy of a chapter of analysis in Robin DiAngelo’s New York Times bestselling 2018 book, White Fragility.

DiAngelo explains a pillar of “White Fragility” is not wanting to know. Bryant’s apologists don’t want to know he dragged his feet on integration long after his campus desegregated in 1963. USC’s aggrandizers don’t want to know USC was accused in the 1960s of limiting its Black players to the unwritten quota of a half-dozen or so.

Word had leaked that Bryant was working behind the scenes with his World War II Navy buddy, Admiral Tom Hamilton, the commissioner of the Athletic Association of Western Universities (the forerunner to today’s Pac-12). They wanted Bryant’s unbeaten and No. 1-ranked team to replace the Big Ten representative as the Rose Bowl’s traditional opponent of the AAWU champion.

UCLA’s Black players, led by Kermit Washington, threatened to boycott. He reasoned if a team with Black athletes can’t play in Alabama, then Alabama shouldn’t be able to play in Pasadena, UCLA’s backyard.

Murray, interviewing Bryant in his hotel room with other sportswriters a day before the Georgia Tech-Alabama game at Legion Field in Birmingham, asked Bryant for his reaction.

“I would have nothing to say about that,” he said. “Neither will the university, I’m sure.”

Does that sound like a Branch Rickey’s heart Bryant claimed he had at Kentucky when he wanted to be the Branch Rickey of college football?

Halberstam concluded, “…the Bear was very late to the dance, especially because people are always talking about football coaches as leaders. In this case, he did not lead very well. We know that he was a divided man on this, and we know that he was slow, much too slow to act, so here we have the real test of a man in conflict with himself…”

But Halberstam was too late. Not even a journalism giant can knock a southern football god from a pedestal cemented with revisionist history.

Michigan State president John Hannah, following the 1947 season, ruled the school would no longer hold out Black athletes, although it remains a fair question to wonder why Hannah didn’t act sooner.

Hannah, president from 1941 to 1969, was a driving force that placed Michigan State on the right side of history. That was true throughout the campus – not just with his football program under Munn (1947-53) and Daugherty (1954-72), a Munn assistant at Syracuse and Michigan State.

Daugherty, recruiting his home state of Pennsylvania, landed Willie Thrower out of New Kensington, Pennsylvania. Thrower went on to become the NFL’s first Black quarterback with the Chicago Bears, in 1953.

Daugherty took it to another level when he provided opportunity for 44 African-American players from the segregated South between 1959 and 1972. The recruits represented 10 of 13 states – all but Alabama, Maryland and Tennessee. Most weren’t stars, but the graduation rate was 68 percent in an era long before academic support systems were part of athletic departments.

By the 1964 season, Daugherty took the Spartans on a road trip to all-white North Carolina. The game marked the first time a fully integrated team played in the South at the height of the Civil Rights movement.

Daugherty scheduling a game in the South has been another example of Black Historiography. It also presents another contradiction to the 1970 USC-Alabama myth.

Alabama author Keith Dunnavant makes an unsubstantiated claim Bryant had been searching for a northern school to play in Alabama, but such schools wouldn’t travel due to the ghastly 1963 TV images of Birmingham police unleashing fire hoses and attack dogs on peaceful Civil Rights protestors. Dunnavant names only Boston College and without substantiation.

The storyline has Bryant rely on his old friend, McKay. This overlooks Daugherty also was good friends with Bryant – not to mention McKay.

Another college football history chapter Daugherty wrote was launching the wave of Polynesian players that permeated all levels of the sport. Fullback Bob Apisa of Honolulu was the first Samoan All-American player as a two-time pick, 1965 and 1966.

The Hawaiian Express was born on Michigan State’s 1947 road game at Hawaii. Daugherty struck up a friendship with Hawaii coach Tommy Kaulukukui, a football legend on the islands dating to his playing days at the school. Hawaii wasn’t a Division I program until 1974, so Kaulukukui recommended players to Daugherty.

William Kaae was Michigan State’s first Hawaiian in 1955. In the 1965 season, Look magazine featured a story on Apisa and his Hapa (Hawaiian slang for mixed ethnicities) teammates, Dick Kenney (Irish/Hawaiian) and Charlie Wedemeyer (German/Hawaiian). They were pictured with Sparty, the iconic statue on campus.

In today’s sports world, the true 1960 pioneers wouldn’t have been overlooked.

In the 2020 football season, Vanderbilt kicker Sarah Fuller was the first woman to score in a Power 5 conference game. The ball through the uprights was sent to the College Football Hall of Fame. LeVias’ historic football was lost to history.

Similarly, in the recently completed Tokyo Olympic, news stories on Tamya Mensah-Stock winning a wrestling gold medal included recognition she was the first Black woman to do so.

Pioneers in the SEC remain bothered by HBO, Showtime and ESPN films celebrated the 1970 USC-Alabama myths. Do the producers and editors of those films know Tennessee’s integrated roster routed Alabama a year before USC?

“There is more fiction in those 1970 USC-Alabama stories than anything,” McClain said. “You’d think that’s when the SEC began recruiting Black athletes. I was almost out of school by 1970.”

Kentucky’s Wilbur Hackett, the first Black captain in the SEC in any sport, also feels slighted.

“I was very disappointed with the way they portrayed Bryant,” said Hackett of the HBO film that otherwise highlighted his pioneering role. “I have the utmost respect for him as a football coach, but what they showed was totally wrong. They wrote it as if Bear Bryant desegregated the Southeastern Conference.”

Bear Bryant was the face used by USC of Troy to launch a thousand myths.

I’ve have researched college football integration since 2012 when I began to work on this book published in 2014:

I will put my research on Michigan State’s leading role and the 1970 USC-Alabama game’s myths and fiction up against anybody, anytime, anywhere.