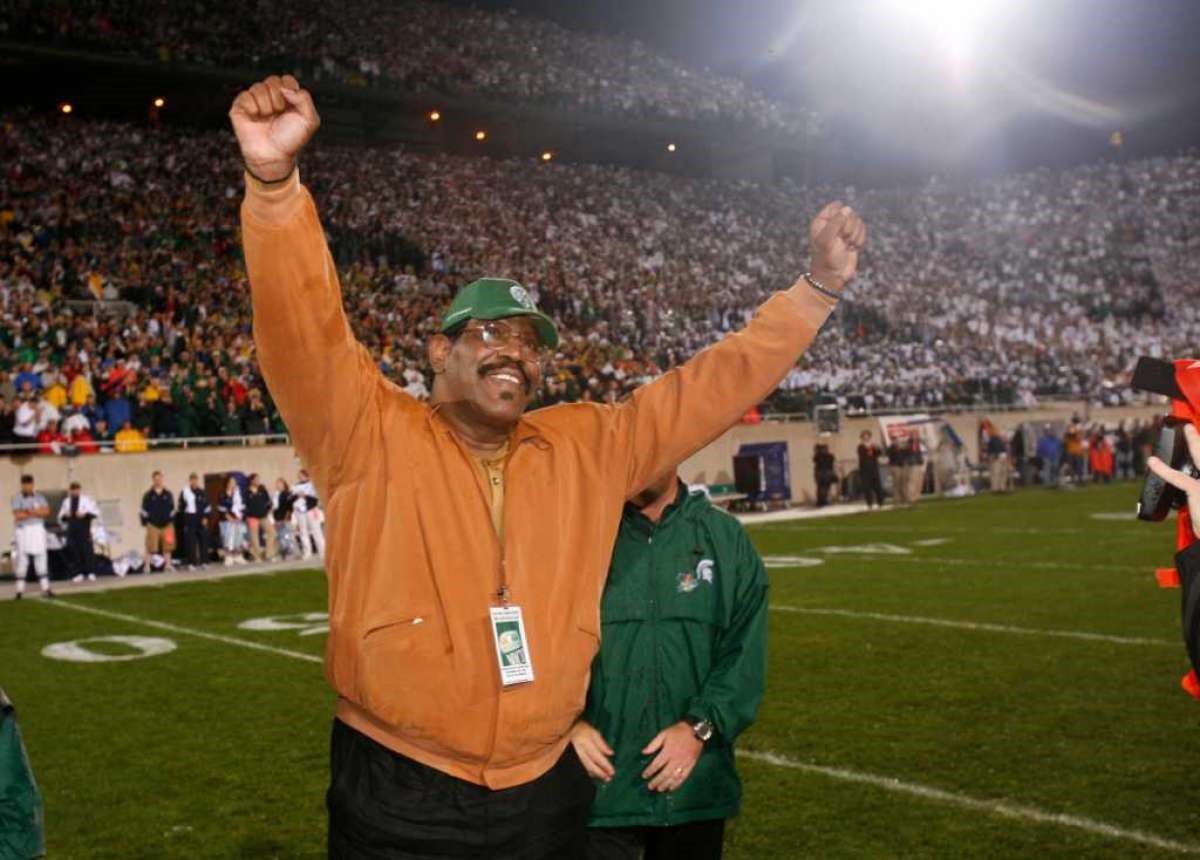 PHOTO; Bubba Smith acknowledges the Spartan Stadium crowd upon having his No. 95 jersey retired in 2006.

Bubba Smith, Michigan State’s inimitable legend, loved telling stores. He especially liked to cast himself as caught in the middle, humorously bewildered by those around him.

In media vernacular, the College Football Hall of Famer turned actor best known for his role in six Police Academy movies and as a popular Miller Lite beer pitchman was good copy.

On the 10th anniversary of his death, Aug. 3, 2011 – he collapsed at age 66 while taking a shower at his Los Angeles home — remembering Smith’s persona raises a question in the brave new world of college sports:

What would the two-time All-American defensive end be worth in today’s Name, Image and Likeness market?

Whatever checks today’s athletes are cashing since the NCAA opened the door to NIL deals, Bubba likely could have topped it in 1966 dollars.

He physically blocked out the sun as a 6-foot-7, 285-pounder with the speed of a skill position athlete. A crowd favorite, his persona overshadowed a star-laden roster. Spartan Stadium’s 76,000 fans chanted, “Kill, Bubba, kill!”

It was playful endearment of a loveable character.

Where else in 1960s America could a crowd of white people urge a very large Black man to “kill” other players – predominantly white in an era that Michigan State featured college football’s first fully integrated rosters – without the chant expressed alarmingly?

Smith arrived at Michigan State from segregated Beaumont, Texas. Prior to his senior year, his hometown American Football League’s Houston Oilers bought Smith an Oldsmobile 98 to get a jump on the bidding war with NFL teams. When Smith showed up on campus with his new wheels, there were rumors a booster paid for it. Daugherty told Smith to return the car.

But with Smith’s marketability, his father, Willie Ray Smith Sr., a high school teacher and legendary coach in segregated Texas, secured a loan from a bank in Beaumont. Bubba bought a Buick Rivera. He was soon known for driving his car around campus with “Bubba” written on the doors. He parked anywhere, including president John Hannah’s reserved campus spot.

“My friends and I used to get on our bikes and ride around campus to see if we could find Bubba’s car,” said Gary Ganakas, who grew up near campus in East Lansing before he later played basketball for the Spartans under his father, Gus Ganakas.

Bubba’s Buick was at the center of his funniest story – one that landed him in jail on the eve of the Game of the Century against Notre Dame, Nov. 19, 1966 at Spartan Stadium. As Smith left Wonders Hall for the Friday night team meal at the Kellogg Center, Smith told quarterback Jimmy Raye, who lived in neighboring Wilson Hall, “Come on, Raye. Let’s profile.”

Smith envisioned himself as a one-man parade as they drove down Grand River Ave., the street separating campus from East Lansing’s business district. The sidewalks were jammed with fans reveling in the upcoming game. Referee Jerry Markbreit, who went on to a long NFL career, worked the Game of the Century. He said it was the most electric football atmosphere he ever saw in his career, including Super Bowls.

The fans on the sidewalk quickly recognized Bubba’s car.

Bubba, enjoying the moment, waved regally as he slowed his speed to a crawl.

But as he turned down Harrison Road toward the Kellogg Center, he was pulled over by an East Lansing policeman. He told Smith he was under arrest for 300 parking tickets and to follow him to the police station.

“You don’t know who I am? Bubba asked.

“I know exactly who you are,” was the reply.

As Smith was led away inside the police station, he told Raye to, “Call Biggie. Tell him they got me.”

Biggie Munn was Michigan State’s athletic director. Raye reached Munn and Biggie shouted back into the phone, “That son of a bitch!”

Raye wasn’t sure then or now if Munn meant Smith or the policeman.

Here’s where Smith’s storytelling takes over with his own spin. He described Munn coming down to the police station and undressing the police chief, “Do you like your job?” Smith said he chimed in, “You tell ‘em, Biggie!”

Not even Bubba’s father was spared as the target of a good story. In 1992, Willie Ray Smith was honored at a Beaumont Lions Club banquet for his 33-year career with 235 wins and two Black state titles. The Lions Club still annually awards the Willie Ray Smith Award to the area’s top offensive and defensive high school players. The Beaumont Unified School District renamed a middle school, “Willie Ray Smith Magnet Middle School.”

Willie Ray had walked with a limp since his teen-age years, and Bubba decided the banquet was a good time to explain the injured leg. Bubba blamed the limp on a gunshot wound his father suffered as an innocent bystander when Clyde Barrow – of Bonnie and Clyde – engaged in a car chase shootout with Denton, Texas, police. It’s true Barrow tried to break out a partner from Denton jail, but Willie Ray wasn’t a victim.

“He told me he got shot by a guy over a girl,” said Garland Boyette, who played high school football for Smith in the late 1950s and later at Grambling State and in the NFL with St. Louis Cardinals and Houston Oilers.

Bubba was the first pick of the 1967 NFL draft by the Baltimore Colts, but by then the AFL and NFL merged, preventing him from taking advantage of a bidding war. He was to too late for bidding wars and too early for NIL.

But just imagine the NIL attention he’d be drumming up. And the stories he’d be telling.

Ten years ago, Bubba Smith’s teammates gathered for his funeral. It was then they realized the clock was ticking on their lives and telling the story of Michigan State’s pioneering teams highlighted by back-to-back 1965 and 1966 national championships. Duffy Daugherty’s 1960s teams were college football’s first fully integrated rosters, changing the sport’s landscape.

That night, teammates approached two-time All-American fullback Bob Apisa, who had a career in Hollywood as a stunt man and actor in small roles. They told him had to head up making a film. He produced “Men of Sparta,” released in 2015 at the Traverse City Film Festival.

At the same funeral, Maya Washington, College Football Hall of Famer Gene Washington’s daughter, began to realize the influence Bubba and his father had on Gene escaping segregation at Michigan State and what it meant to the future of the family. Willie Ray Sr. and Bubba told Michigan State coach Duffy Daugherty while recruiting Bubba to take Gene, too. Gene played at rival Baytown Carver.

Maya, with her own Hollywood background, produced “On the Banks of the Red Cedar,” released in 2016 and shown as several film festivals.

My book with Jimmy Raye, “Raye of Light: Jimmy Raye, Duffy Daugherty, the 1965-66 Michigan State Spartans and the integration of college football,” was published in 2014.

They have contributed to expanding awareness that Michigan State was on the right side of history, but the final step to reach a larger audience belongs to Michigan State’s administration. It needs to educate its own administrators, athletic department, alumni and students.

There are still people at MSU who believe the fictional myth Alabama coach Bear Bryant sent Daugherty his Black players from the South. There is no truth to those stories.

Unlike any other college coach, Daugherty had a vast network throughout the South of southern Black high school coaches sending him players like College Football Hall of Famers Bubba Smith, George Webster of Anderson, S.C., and Gene Washington of La Porte, Texas.

I tell MSU people that to believe the Bear Bryant stories is to accept Bryant as a crusader and Daugherty as a passive bystander. Nothing could be further from the truth. Daugherty was the crusader. Bryant continued to coach all-white teams until 1971, eight years after his campus desegregated.

I wish I had a nickel for every time someone, old or young, contacted me upon reading Raye of Light and commented, “I never knew any of this.”

In 2013, a marker was placed outside Jenison Fieldhouse that recognizes, “The Game of Change.” It was 1963 NCAA Mideast Regional basketball game matching segregated Mississippi State against eventual NCAA champion Loyola Chicago with four Black starters. The game has nothing to do with Michigan State’s history leading college sports integration other than MSU coincidentally was the regional host.

Meanwhile, there is no marker or statue on campus recognizing Michigan State’s pioneering teams under Daugherty as a College Football Hall of Fame coach, Smith as the most famous Spartan, George Webster as the greatest Spartan and Jimmy Raye of Fayetteville, N.C., as the South’s first Black quarterback to win a national title.