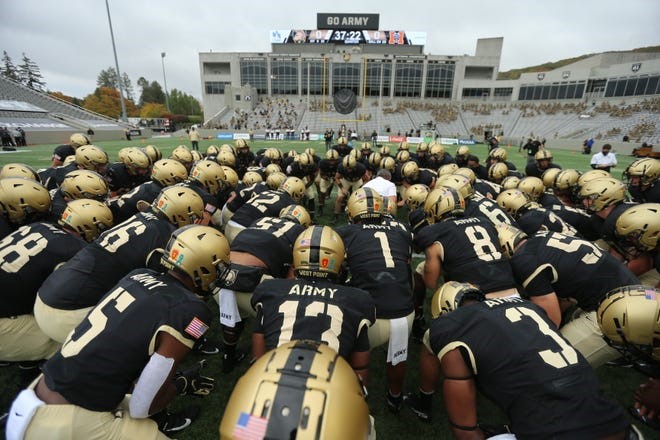 Another kind of awareness, racial, was an additional quality that Army West Point’s players gained as a result of the COVID-19 pandemic shutdown.

The players relied on virtual group phone calls to remain connected upon West Point closing nine months ago at the start of COVID-19 pandemic. At first, they were casual conversations from hometowns that span America – geographically, socio-economically, racially and politically.

It wasn’t long, though, before more recent current events overtook their talks. The social justice movement that swept the nation last spring and summer added to an already turbulent 2020.

Academy athletes seemingly learn everything about each other, especially by their senior year. They’ve lived concentrated time together on campus. Their days include challenging academics, military training that began with boot camp the summer before enrolling and, of course, the typical team bonding inherent with the practice field, meeting rooms and locker room.

Army players like to say football practice is the easiest part of their day.

But they discovered in a multi-cultural society there always is more to understand, even in the diverse military that can be described as more merit-based than the rest of America. I had a chance to ask five players about their team conversations while writing features on them over the course of the season.

“I’m from California, and I didn’t know what was happening in Alabama and Georgia,” said senior offensive tackle J.B. Hunter of Oceanside located in suburban San Diego. “I would have never met these guys if I hadn’t come to this institution. I’m very grateful for that. It’s created understanding in other aspects. When I become a platoon leader, it’s going to help me understand people.”

Army’s seniors have led the Black Knights to a 7-2 record as they play their final games this month.

The 121st Army-Navy Game kicks off at 3 p.m. Saturday when the Midshipmen (3-6, 3-4 AAC) face the Black Knights at West Point’s Michie Stadium instead of Philadelphia due to the pandemic. Army meets Air Force (3-2, 2-2 MWC) on Dec. 19 in a game rescheduled from Nov. 7 when Air Force was unable to travel due COVID-19 protocols. Army also has a berth in the Independence Bowl on Dec. 26 in Shreveport, Louisiana, against a Pac-12 opponent.

The Cadets are prohibited by policy from making political statements, but they were comfortable explaining awareness gained they say will make them better future officers. Their five-year military commitment is in exchange for an elite education, a chance to play Division I football and the economic security of a guaranteed job.

“Those conversation have been nothing but beneficial for each person,” said Mike Johnson, a team captain and senior offensive guard from Hinsdale, Illinois. “Also, it has been a moment for our team to bond. It helps we can see where everyone is coming from and the struggles they faced before coming to West Point. It brings us closer. There is nothing more you want to do than help your brother out. I think it’s been a great help to our team.”

As the spring virtual conversations progressed, Army coach Jeff Monken recognized the value. He added the talks to their team structure once the players returned to campus in the summer.

“I credit our coaching staff,” said junior safety Cedrick Cunningham, an African-American from Cassett, S.C. “The coaches and our team as a whole took an interest in this and they made it more formal when we got back here. We’re still having those conversations to this day.”

Cunningham shared stories of growing up Black, particularly in the South, that Hunter and Johnson referenced. They learned about subtle racism in addition to overt and systemic.

“This summer when we came back we had a lot of talks about things that are going on in our country,” Cunningham said. “Our guys that didn’t have any experience in that realm or had never seen anything of that nature, they had a lot of questions. I think, for me, it was great seeing that people were willing to learn and share about our sides of stories. We honed in on listening to each other and talking to each other and understanding each other. That made us stronger as a brotherhood.”

“It’s been eye-opening to hear my brothers share their stories and hardships and what their families have had to go through,” he said. “Growing up I didn’t really see it as much, so to hear these stories from people I love and care hits close home. It’s been very impactful, and I’m very thankful we’ve had to the chance to talk about as much as we have.

“We are the future, and I feel grateful to be in this position with the guys I’m playing with. They have taught me so much about myself, about themselves and our country. I’ve grown so much as a person.”

Another African-American senior commenting on their talks is Jordan Blackman, a Southern Californian from Lake View Terrace.

“I think the beauty of it all has been having empathy for one another,” Blackman said. “It’s treating people with respect whatever you look like and your background. We’ve done a great job sticking together and having respect for your brothers.

America is on an ever-evolving path and reckoning from the shackles of slavery followed by segregation and the Jim Crow South. It’s not a straight line of progress, as President Barack Obama has explained, but it is forward momentum.

Army Col. (Ret.) Herman Bulls, West Point Class of 1978, has lived much of the progress. He grew up in segregated Alabama, but once the state’s public schools fully desegregated in the 1968-69 school year, he became Coffee High’s first Black starting quarterback in the fall of 1973.

Then-Army coach Homer Smith recruited him at a time there were still few African-American Cadets at West Point. His recruiter was Gary Steele, Army’s first Black football letterman (1966-68). Bulls is now a Fortune 500 executive and vice-chairman at Jones Lang Lasalle in Washington, D.C.

“Forty years ago, many of the discussions about race taking place today did not occur, even at West Point,” Bulls said. “The aftermath of the Civil Rights movement of the 60s and the unpopular Vietnam War had a chilling effect on having authentic discussions. I think today’s Cadets are having the opportunity to have frank discussions and learning about one another’s feelings and experiences. This is a great foundation for producing empathetic and resourceful leaders for our Army.”

Awareness on the field has always been an indispensable quality for athletes to play together as a unit, and Hunter added they’ve learned another awareness quality.

“It’s been great to learn more about everyone, to know where people come from and their different backgrounds,” he said. “You learn about how things are right or wrong from different perspectives. You get an in-depth look on everyone’s outlook. It has brought the team so much closer, we’re so much more aware.”