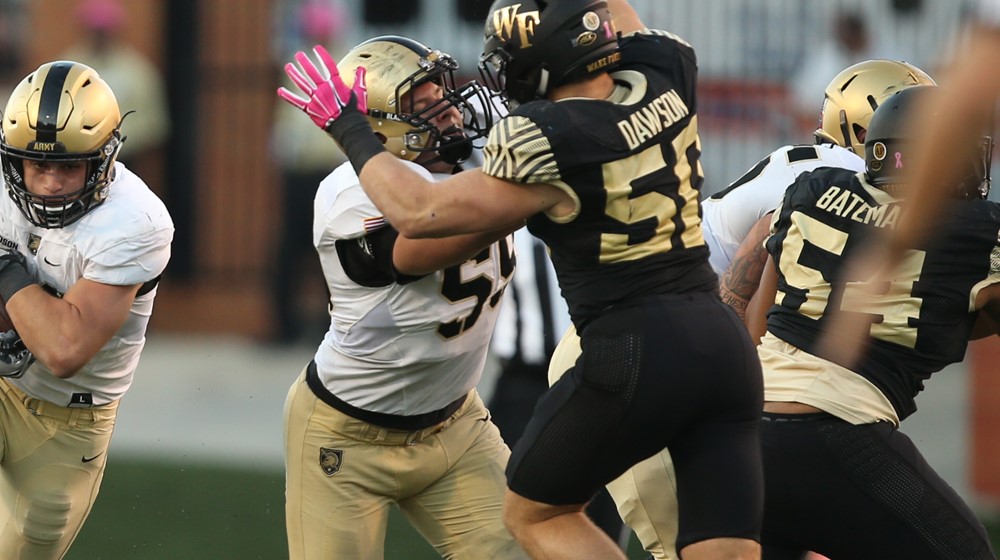 Army offensive guard Mike Johnson suffered torn knee ligaments his sophomore year, resulting in a rehab process that came with the good and the bad to get back on the field. Although he gained a rare academy fifth year this fall, the extra semester came with an emotional downside.

He missed out on graduating with his classmates.

In the brotherhood gained from four years of West Point academics, football and military training, it’s a bond unlike anything experienced at civilian colleges.

Something else Johnson missed out on was Branch Night. That’s a highlight of a Cadet’s West Point tour surpassed only by the pomp and circumstance of graduation. It’s when Cadets learn the branch that they’re to committed serve for the next five years.

Johnson put in for infantry.

That might make him unique in a nation of 300 million with only 0.4 percent that serve their country, but the Army’s most dangerous job is coveted at West Point.

“Infantry is the most popular choice of our Cadets in general,” Army coach Jeff Monken said. “People are surprised to hear that. But young men and women come to West Point to lead soldiers. They want to do the hard jobs, the difficult things.”

Monken, understanding the magnitude of Branch Night his captain missed out on last year, wanted to do something special for Johnson. After practice on Nov. 18, Monken gathered his team as Johnson was called up and presented with an envelope.

Johnson opened it and shouted “Infantry” as he raised both arms in celebration. His teammates cheered like the 6-foot-3, 285-pound guard had scored touchdown against Navy.

“I was fortunate the staff and the team gave me that moment,” Johnson said after practice on Tuesday as Army awaits its final two games, Dec. 12 against Navy and Dec. 19 against Air Force, both rescheduled for West Point’s Michie Stadium due to the COVID-19 pandemic. “It was really cool. It was almost a surreal moment, better than I thought it could be. It really brought a smile to my face.”

As Monken said, most people are surprised to learn infantry is coveted. Johnson explained why it’s desired.

“I think it’s the closest thing to what people love about being part of teams, especially football teams,” Johnson said. “It’s being a part of great cultures. They want to continue that teamwork.”

Johnson, who is from Hinsdale, Illinois, said the desire grows upon a Cadet during the West Point experience.

“I had a good idea it’s what I wanted to do,” he said. “But as time progressed and I saw firsthand the culture — especially while being with this team – it strengthened in my mind I wanted this.”

Innumerable tales span the history of West Point football, but to tell the full story, an opus, the wars that turned out to await some classes of Cadets must be included.

Doc Blanchard, the 1945 Heisman Trophy winner, was drafted in 1943 and later sent to West Point. The Air Force was still part of the Army when Blanchard graduated, and he chose the Air Force as his future similar to how today’s Naval Academy graduates choose between the Navy and the Marines. Blanchard flew fighter missions off aircraft carriers in the Korean and Vietnam wars, including 84 over North Vietnam.

Rollie Stichweh, Army’s quarterback in the epic 1963 and 1964 Army-Navy Game games against 1963 Heisman Trophy winner Roger Staubach, served in the infantry in the Central Highlands of Vietnam near the Ho Chi Minh Trail.

Pittsburgh Steelers offensive tackle Alejandro Villanueva, who played at Army from 2006 to 2009, served three tours in Afghanistan following his 2010 graduation.

All of them – along with many others — are remarkable stories of service to their country, but the post-9/11 West Point graduates serve under circumstances unlike any other generation. They chose to serve in an all-volunteer military – established after the Vietnam quagmire — during an endless war on terrorism.

Phil McConkey, a 1979 Naval Academy graduate and star wide receiver that flew helicopters in the post-Vietnam Cold War, best explained the difference between then and now. McConkey, among other endeavors following his NFL career as a Super Bowl champion with the New York Giants, founded Academy Securities to specialize in employing veterans.

That will be Johnson’s world soon, but not before Army plays its final two regular-season games and travels to the Independence Bowl scheduled for Dec. 26 against a Pac-12 opponent.

The Black Knights improved to 7-2 with the Georgia Southern victory three days after Johnson learned his branch. Now Army is in the unique position of playing the two opponents that decide the Commander-in-Chief’s Trophy in back-to-back weeks.

The Army-Navy Game is the traditional end to the college football regular season, but Air Force’s game at Army scheduled Nov. 7 was postponed due to COVID-19 tracing on Air Force’s roster.

Air Force already defeated Navy in October, so Army will have to defeat Navy to set up a winner-take-all game with the Falcons. This marks the first time the Army-Navy Game has been played at one of the academy stadiums since 1943 when Navy played at West Point due to World War II travel restrictions.

The Air Force-Navy and Air Force-Army games are mid-season affairs that are a home-and-home series.

“With the pandemic and all that has happened this year, it’s special to have a chance to play football,” Johnson said. “It’s even more so to play at West Point. And being a senior it’s great to more home games. We want to take advantage of this opportunity.”

“When you have to work really hard, you invest a lot into something to be successful, and you do that with other people that you have to rely on to come out on top,” Monken said. “You enjoy that more than individual accomplishments. I think that’s something they value and they want that to continue. They want to have opportunity to lead other teams and units that have the same ideals and values. And there is no place better to do that than in an infantry unit.

“I don’t know if there is a more noble profession than being a United States soldier and defending the freedoms of our country. I’m proud of them no matter where they go into. Our guys have sense of belonging. They feel an urge that is a good fit for them.”

Air Force gains leg up on CiC Trophy with chance to clinch Nov. 7 at Army