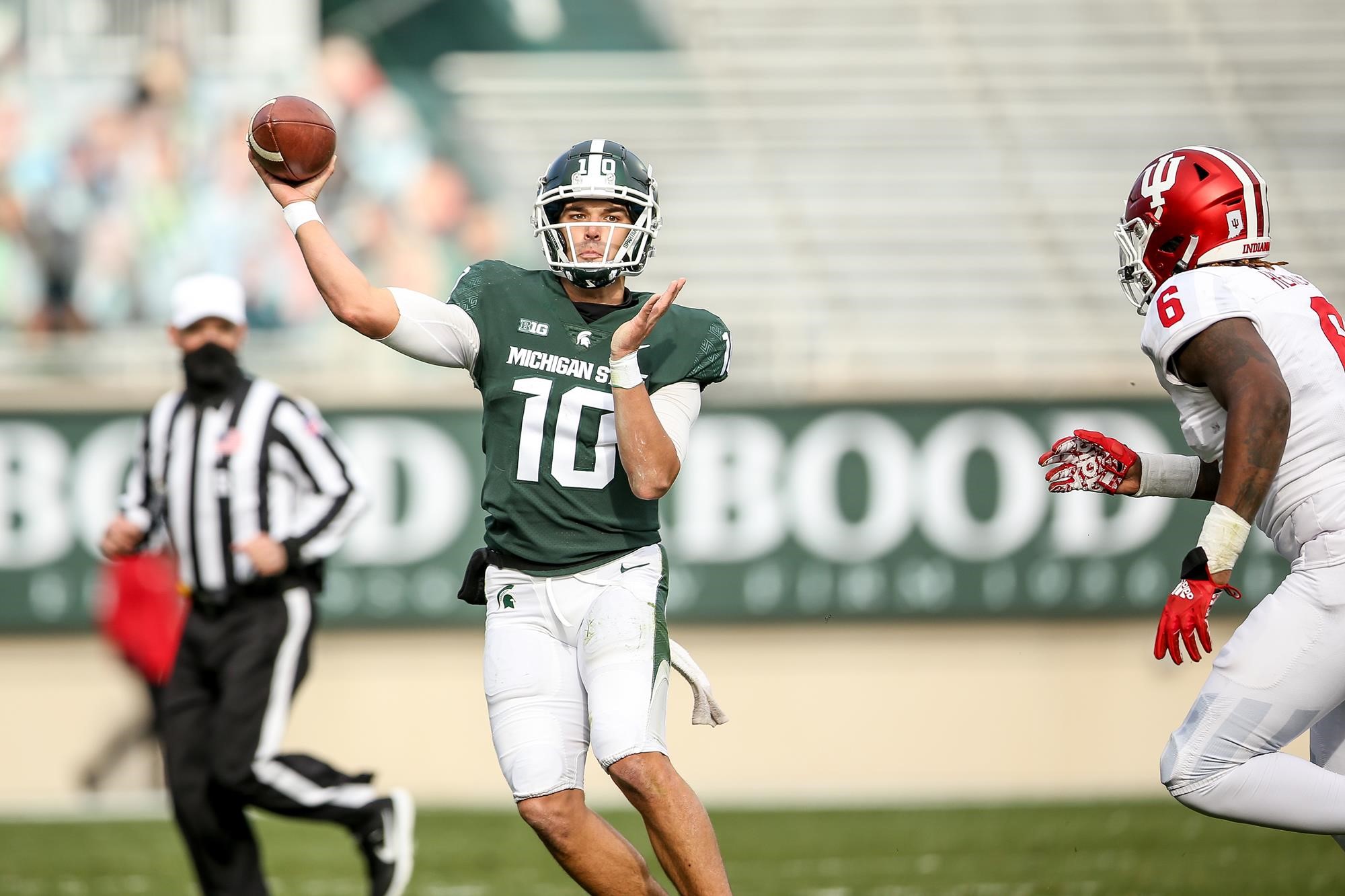 The Hoosiers (4-0) not only have superior talent to the Spartans (1-3), they’re operating at a higher level of efficiency. Indiana, ranked No. 10, set up a showdown of unbeatens Saturday at No. 3 Ohio State (3-0). The Buckeyes were idle when COVID-19 infections at Maryland postponed their game.

A month into the abbreviated season, Indiana is preparing to play the Buckeyes for the Big Ten lead. Meanwhile, the Spartans, with an unwatchable offense, are an extreme contrast. They have a long day in three weeks looming against OSU.

Indiana was the superior team coming into the season, regardless of how COVID-19 has disrupted planning for all teams.

In college football today, the winning formula is an elite quarterback with an offensive line providing protection. Indiana has both; Michigan State has neither.

The Hoosiers returned quarterback Michael Penix Jr. as a redshirt sophomore throwing to two dynamic senior receivers, Whop Philyor and Ty Fryfogle, and productive junior tight end, Peyton Hendershot. Penix completed 25-of-38 passes for 320 yards with two touchdowns and no interceptions. Fryfogle had the big game this week with 11 catches for 200 yards and two touchdowns and a long of 65.

Indiana’s defense entered the game fifth in the conference, allowing 364.0 yards a game, but the Spartans managed only 191 total yards (131 passing and 60 rushing). Jayde Reed’s 27-yard catch was the only explosive pass play longer than 20 yards. The Spartans averaged only 2.5 yards per carry.

Lombardi says he’s healthy, but he’s not playing with explosion or mobility he displayed leading the 27-24 upset of Michigan two weeks ago.

INDIANA ON THE RISE, NOT A SURPRISE

The Hoosiers have been on the rise in recent seasons and the Spartans in decline.

Indiana coach Tom Allen 5-7 teams in 2017 and 2018 were close to breaking through, threatening upsets of Michigan in 2017 and Penn State in 2018 before falling.

Last year’s Hoosiers were 8-4 record in the regular season, although they lost 23-22 to Tennessee in the Gator Bowl. Michigan State, Nebraska and Penn State needed fourth-quarter scores to beat the Hoosiers.

Allen has said his vision has been to emulate Michigan State’s model under Mark Dantonio for developing 3-star talent and playing tough defense. They are closer to that style the Spartans.

The pendulum was swinging Indiana’s way and sweeping the Spartans backward further back than just 2019. That was reflected in Phil Steele’s 2020 magazine predictions. Indiana was fourth behind Ohio State, Penn State and Michigan and Michigan State was sixth.

PLEASE, NOT THE PERLES WAY

I get it. George Perles passed away Jan. 7, 2020, so the Spartans wearing Perles-era uniforms distinguished by an “S” on only one side of the helmet was a tribute. Perles rebuilt the Spartans from the Muddy Waters debacle (1980-82). His Spartans were Big Ten and Rose Bowl champions his fourth season, 1987.

Perles made his name as a head coach candidate as the Pittsburgh Steelers’ defensive coordinator. The Steelers, whose helmets have a decal only one side, were a dynasty with four Super Bowl titles in six years.

The difference, though, was Fry remained focused on coaching after his initial success of a Rose Bowl trip in his third season, 1981. He sustained a consistent program with Top 25 teams and two more Rose Bowl trips, 1985 and 1990.

Perles followed his Rose Bowl triumph with a series of power plays, leveraging the NFL for more money and the dual role of head coach and athletic director. He put his personal interests ahead of the team.

Recruiting suffered. The next seven seasons, prior to Perles’ dismissal, he only had two more teams finish ranked in the Top 25. Michigan State didn’t return to the Rose Bowl until 2013 under Mark Dantonio.

Some older Michigan State alums also rolled their eyes at the way Perles played up his relationship with Duffy Daugherty, having played for and coached under the College Football Hall of Famer. They say Perles exploited that image that wasn’t as real as he made it sound.

Mel Tucker inherited a rebuilding program just as Dantonio did in 2007. Dantonio’s program faded on him the last two of his 13 seasons, but it wasn’t because he put himself ahead of the school.

Tucker needs time to turn around this program. The honeymoon he deserves is turning out to be a long season. But, remember, the growing pains were necessary.

It would be uglier if Dantonio hadn’t retired. He’d being having his legacy sullied by social media week after week.