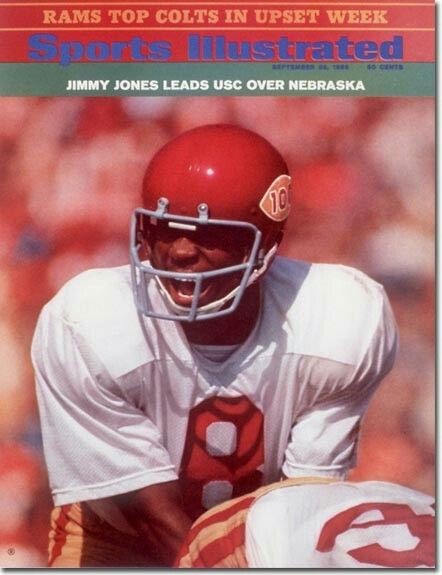 If Mark Twain were alive today as a college football fan, he might have said, “There are lies, damn lies and conjecture.”

But if there had been a kernel of truth to the USC-Alabama myths, the highlighted Trojans player for Bryant to educate his bigoted fans was USC quarterback Jimmy Jones. Unlike Cunningham, Jones was a returning starter; he made a 1969 Sports Illustrated cover.

In 1970, Condredge Holloway was a highly recruited senior quarterback at Lee High in Huntsville, Alabama. Holloway has said Bryant told him Alabama wasn’t ready for a Black quarterback and only recruited him as a defensive back.

Holloway, instead, made history at Tennessee as the SEC’s first Black quarterback (1972-74). Holloway was embraced in a neighboring state that had its share of bigots.

Bryant’s words to Holloway need to be weighed against him when speculating on his mindset in 1970. To accept he feared the alumni has been a specious excuse for too long. But the misleading narrative remains Bryant had a secret plan to end segregation with USC’s help.

In 2006, Papadakis was selling the USC/Alabama/Sam Cunningham mythology in a book with bestselling author Don Yaeger and Cunningham, “Turning of the Tide.” Yeager, to his credit, cites McCready’s 2003 reporting that exposed the Bryant/Cunningham locker room tale as fiction.

However, on Page 142 Yeager devotes nearly a full page with Papadakis’s fictional account of Bryant taking Cunningham into the locker room. Papadakis quotes Bryant belittling his players, telling them Cunningham, “ran your slow motion-asses right out of our own house.” The dialogue sounds like it was from a movie script. The demeaning words explain why Alabama’s players were miffed Bryant was portrayed that way.

Why Bryant has been celebrated for waiting until 1970 to recruit a Black player is an unanswered question. Speculation Bryant needed McKay in 1970 overlooked Bryant and Daugherty also were good friends. Daugherty took Michigan State on the road to play at segregated North Carolina in 1964, the height of the Civil Rights movement.

Alabama author Keith Dunnavant and John David Briley also rely on conjecture in their books and film appearances. They ignore Bryant, in his book, never mentioned or hinted at the plot.

In the pre-Internet age, stories about LeVias, Hackett, McClain, Owens and other pioneering SEC Black athletes were limited to their local media markets. Anyone in Los Angeles dreaming up an oversimplified myth was likely unaware of the numerous integration steps – including Tennessee’s 1969 rout at Legion Field — that had taken place outside of Bryant’s realm.

Travers, when asked where he stands in 2020 on the Cunningham locker room parade, wrote in an email, “it is a myth.” He added: “Very early I knew it was untrue and wrote it, and at least in SC circles debunked a decades-old story and took some heat over it.”

Travers’ email added Fertig exaggerated the Cunningham story and Papadakas, “eventually backed off on the story.” But he stands by the overall theme, “USC/McKay was the perfect conduit.”

Yeager said in an email “no one suggested Bryant’s efforts changed ALL of college football … but it did change the game in the South. It would be a stretch to say others were harmed by the USC-Alabama story just because they did it earlier.”

He added he interviewed all Bryant’s then-living the assistant coaches and, “they were unequivocal that he was always intentional in efforts, especially re: scheduling. No one believes it was an accident that he chose an integrated team to come when the opportunity presented itself.”

Duke playing like it is already advancing in the NCAA tournament